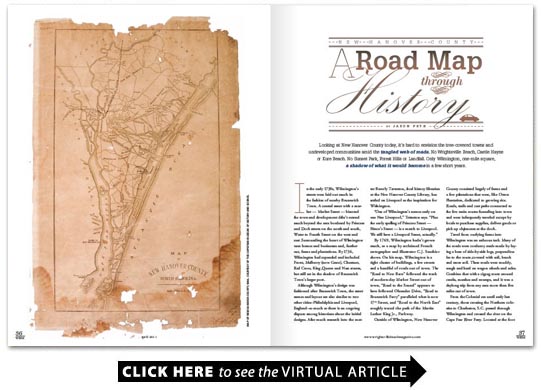 Looking at New Hanover County today its hard to envision the tree-covered towns and undeveloped communities amid the tangled web of roads. No Wrightsville Beach Castle Hayne or Kure Beach. No Sunset Park Forest Hills or Landfall. Only Wilmington one-mile square a shadow of what it would become in a few short years.

In the early 1730s Wilmingtons streets were laid out much in the fashion of nearby Brunswick Town. A central street with a market Market Street bisected the town and development didnt extend much beyond the area bordered by Princess and Dock streets on the north and south Water to Fourth Street on the west and east. Surrounding the heart of Wilmington were homes and businesses and further out farms and plantations. By 1736 Wilmington had expanded and included Front Mulberry (now Grace) Chestnut Red Cross King Queen and Nun streets but still sat in the shadow of Brunswick Towns larger port.

Although Wilmingtons design was fashioned after Brunswick Town the street names and layout are also similar to two other citiesPhiladelphia and Liverpool Englandso much so there is an ongoing dispute among historians about the initial designs. After much research into the matter Beverly Tetterton local history librarian at the New Hanover County Library has settled on Liverpool as the inspiration for Wilmington.

“One of Wilmingtons names early on was New Liverpool ” Tetterton says. “Plus the early spelling of Princess Street Princes Street is a match to Liverpool. We still have a Liverpool Street actually.”

By 1769 Wilmington hadnt grown much as a map by acclaimed French cartographer and illustrator C.J. Sauthier shows. On his map Wilmington is a tight cluster of buildings a few streets and a handful of roads out of town. The “Road to New Bern” followed the track of modern-day Market Street out of town “Road to the Sound” appears to have followed Oleander Drive “Road to Brunswick Ferry” paralleled what is now 17th Street and “Road to the North East” roughly traced the path of the Martin Luther King Jr. Parkway.

Outside of Wilmington New Hanover County consisted largely of farms and a few plantations that were like Orton Plantation dedicated to growing rice. Roads trails and cart paths connected to the few main routes funneling into town and were infrequently traveled except by locals to purchase supplies deliver goods or pick up shipments at the dock.

Travel from outlying farms into Wilmington was an arduous task. Many of the roads were corduroy roads made by laying a base of side-by-side logs perpendicular to the route covered with soil brush and more soil. These roads were muddy rough and hard on wagon wheels and axles. Combine that with a zigzag route around creeks marshes and swamps and it was a daylong trip from any area more than five miles out of town.

From the Colonial era until early last century those crossing the Northern colonies to Charleston S.C. passed through Wilmington and crossed the river on the Cape Fear River Ferry. Located at the foot of Market Street the ferrya flatboat towed by rowboats powered by slaves or indentured servantscrossed to Eagles Island near the Battleship North Carolina. Once there it was a boggy swampy trek to another ferry across the Brunswick River then on down the Kings Highway to Charleston.

Travelers had other options. Another ferry took passengers across to Brunswick Town south of Town Creek shoals but it was located far out of town. Or they could take the North East Road out of Wilmington and cross the river at a narrower point further upstream.

Through the late 18th and early 19th centuries Wilmington and surrounding farms and towns gained more residents but the city itself didnt expand its total land area by much. By the early 1800s the city was the largest in North Carolina but only encompassed an area from Wooster Street on the south to Campbell Street on the north and from the river east to Fifth Avenue. A map of downtown dated 1810 shows that while Wilmington hadnt stretched its borders significantly it had become more densely populated.

By 1856 the face of New Hanover County had changed. Better more established roads connected Wilmington to nearby plantations farms and settlements and Wilmington had grown exponentially stretching from Marstellar Street on the south to beyond Howard Street on the north side and east to 13th Street. According to a Wilmington map the city included nearly 400 blocks of commercial residential and industrial buildings.

Across the river where the Battleship is moored a commercial section of town had developed around the ferry landing and the banks of Eagle Island were filled with ship repair facilities and other industrial works. Today some of the ruins of these boat works remain and can bee seen from the Riverwalk.

Throughout the Civil War and in the years following New Hanover County continued to expand. The development of better roadways and railroads largely built to support war efforts made travel in the county easier and led to the increased development of neighboring communities. In an 1886 map of the county the area around present day Monkey Junction appears as Masonboro Township Ogden is called Harnette Township and Castle Hayne is Cape Fear Township.

The number of significant roads is triple that of any preceding map with major named roads including Tobacco Plank Road which follows Market Street; Wrightsville Road which appears to be what is now Wrightsville Avenue; Masonboro Road; Duplin Road; and Federal Point Road now Carolina Beach Road.

By the early 1900s Wilmington had expanded its city limits and communities like Winter Park Wrightsville Beach Carolina Beach Kure Beach and Wilmington Beach were rapidly expanding. The old rowboat-drawn river ferries were replaced with a gasoline-powered ferry in 1907 marking a transition into the modern era. In the following years roads were paved some with asphalt others with macadam and one famously with oyster shells and a trolley line began to service downtown Wilmington to Wrightsville Beach.

The 20th century saw New Hanover Countys roads become truly modernized. The first major development was in 1929 when two bridges across the Cape Fear River and Northeast Cape Fear River were dedicated. These two toll bridges were christened during Prohibition not with champagne but with bottles of river water. The Twin Bridges as they were called put an end to nearly 200 years of ferry service into Brunswick County and filled in the last gap in the Atlantic Coastal Highway connecting Maine with Florida.

As the county grew so did the need for another larger bridge across the river. In 1969 construction was completed on the Cape Fear Memorial Bridge. But it didnt stop there. In 1980 the Isabella S. Holmes Bridge was named after an influential deputy secretary of the Department of Transportation who promoted the $19 million project for her hometown.

In 1990 the final piece of New Hanover Countys transportation puzzle fell into place with the completion of the highly anticipated hotly contested coast-to-coast Interstate 40. I-40 revolutionized travel to and from New Hanover County to Raleigh reducing the trip to two hours from two and a half or three hours and connecting the outside world with an ease and convenience never before known. The two mayors from either end of I-40 Don Betz of Wilmington and Bill Pope of Barstow California celebrated the opening of the 2 554-mile highway in ceremonies at Newton Grove where the final section of the road was opened and Wilmingtons I-40 East Coast terminus.

The opening of I-40 was one fraught with doubt and dissention. Headlines in newspapers across New Hanover County read “I-40 traffic jamming citys streets ” “Has I-40 helped local economy?” and “Heavy traffic: can we expect any relief in days to come?” Photos show hand-made signs that read “I-40  Go Home!” and “Turn Around.” Editorials decried the influx of a “new kind of tourist the day tripper” and focused attention on the countys beach towns calling Wrightsville Beach “a parking war zone.” At Wrightsville Beach it was said an estimated 1.46 million more cars were on the road in the year after I-40s opening than the year prior. The economic benefits of the highway were also under fire with the Wilmington Morning Star citing a countywide stagnation in property values a modest sales tax revenue growth of 19 percent but a 45 percent increase in the room occupancy tax equating a nearly flat growth pattern.

But looking at New Hanover County before and after I-40 the bridges across the Cape Fear River or the development of easily maintained roads in the early 20th century shows a different picture. Before the advancements in transportation technology clusters of homes farms and businesses and a few larger towns were the norm. Easier modes of transportation allowed residents to spread out a little more to fill in the gaps between communities and begin to settle into new planned developments like Sunset Park Carolina Heights Silver Lake Pine Valley and Kings Grant.

As I-40 was completed industrial parks were built along its corridor on the northern end of the county; billboards advertising hotels motels restaurants and attractions went up beside the highway; and the state port saw an increase in its traffic. The University of North Carolina Wilmington grew in prominence as potential faculty and students discovered it. As the university grew so did the businesses and neighborhoods around it.

Through the 20th century New Hanover County continued to grow proving true some predictions of heavy traffic and increased population due to I-40. Census data from 1990 put the county at 120 000 residents and the most recent Census reveals 195 000 county residents. As the population increases so does the burden on the roadways but proposed projects like the Skyway Bridge and the I-140 Bypass promise to ease the congestion and usher in yet another new era.

Can you remember the order of streets in downtown Wilmington?

In years past Wilmington schoolchildren memorized the following story to learn the order of the streets downtown. Each italicized word is the name of an east-west street in correct order from north to south:

I came to town with Mr. Brunswick and he said Hanover your jewels but I gave him a can of Campbell soup instead. I carried him to the Red Cross hospital and they gave me some Walnuts for Grace but she liked Chestnuts better so I gave them to the Princess.

I had to go to the Market and I saw a boat Dock. I thought I would buy an Orange for Ann but they had Nun.

I came down by Fifth Avenue Church and I saw an old Castle where the Queen lived. I then went to see Mrs. Wooster and went with her to Mr. Dawsons store where we saw Mrs. Wright and Mrs. Meares and Miss Marsteller who said dont Kidder take her to Greenfield where the Martin sings.