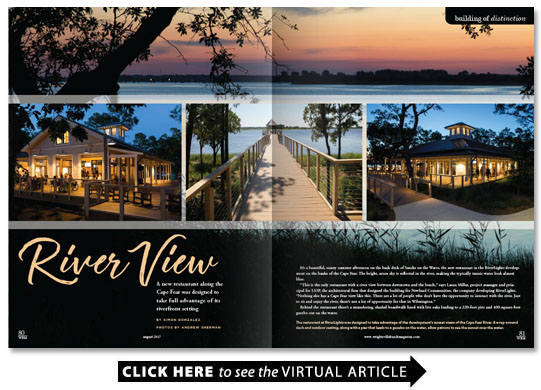 It’s a beautiful sunny summer afternoon on the back deck of Smoke on the Water the new restaurant in the RiverLights development on the banks of the Cape Fear. The bright azure sky is reflected in the river making the typically tannic water look almost blue.

“This is the only restaurant with a river view between downtown and the beach ” says Laura Miller project manager and principal for LS3P the architectural firm that designed the building for Newland Communities the company developing RiverLights. “Nothing else has a Cape Fear view like this. There are a lot of people who don’t have the opportunity to interact with the river. Just to sit and enjoy the river there’s not a lot of opportunity for that in Wilmington.”

Behind the restaurant there’s a meandering shaded boardwalk lined with live oaks leading to a 220-foot pier and 400-square-foot gazebo out on the water.

“It’s a unique site ” Miller says. “The boardwalk weaves through the trees. We were very cautious about trying to maintain as many of the trees as possible. There really isn’t anything else like this in Wilmington where you can sit here and see the river and yet still have the trees and the tree canopy.”

The river dictated most of the design decisions about the building’s simple L shape. The proximity to the water prompted Miller and Dean Webb LS3P’s project designer for the building to reach into the state’s past.

“We were going for more of a rustic feel something that harkens back to coastal Carolina vernacular from years back ” Webb says. “Not necessarily a fish house; we wanted something a little more modern than that.”

They looked at old shacks houses and businesses around Wilmington that reflected the Coastal Carolina vernacular for inspiration. It’s incorporated in the restaurant design in eight-foot wraparound porches and decks with Adirondack-style rockers whitewashed horizontal stacked cypress walls and exposed ceiling trusses rafters and rafter tails that are functional as well as decorative.

“That is the actual structure of this building ” Webb says. “It goes back to a time when you used to see it around Wilmington a lot downtown at Wrightsville Beach. When homes were built instead of covering up the rafters like they do on newer construction they left them exposed. You go inside and you see the structure also. The electrical conduit and sprinkler piping was left exposed in the dining and porch areas. This aided in keeping with the character of the building while providing visual interest throughout.”

The building is designed to take advantage of the natural light — it isn’t shaded although surrounded by trees– and the breezes coming off the river. There’s a corrugated-metal trimmed cupola with large fixed windows over the bar. Clear garage doors and vinyl walls roll up opening the view and allowing the air to circulate and seamlessly blending the outdoor and indoor seating.

“Ideally on most days when you’ve got the breeze coming off the water you wouldn’t need to run the HVAC units or even turn the lights on ” Miller says. “You open the garage doors you roll up these vinyl coverings and the natural breeze keeps it cool it keeps the bugs away. There’s plenty of sunlight streaming in though the big openings and windows in the cupola. Ideally that’s how the building would function for most of the year.”

“We wanted something that was low maintenance but would stand the abuse of being out in semi-salty air ” Webb says. “It’s not quite as bad as it is on the ocean but there is a lot of salt intrusion up through the river.”

The design team could have opted for an opulent building with lots of creative touches but they are comfortable with the decision to instead emphasize the natural riverfront setting.

“It can be easy to fall into the trap of throwing every detail in the book at a project ” Miller says. “One of the things about this building is it’s kind of understated and very simple but the details are very purposeful. We were trying to be authentic to Wilmington and not try to replicate another city or another piece of architecture.”

Before or after their meal patrons can enjoy the natural setting by strolling along the boardwalk and walking out onto the pier in this pristine section of the river.

The river here is wide probably five times wider than it is downtown. There’s an island in the middle drawing the eye onward to the tree-lined and mostly undeveloped bank on the Brunswick County side.

“The water’s edge here is loaded with vegetation ” says Jim Henry Newland’s vice president of operations. “The edge is green the water is blue and you are looking across at the islands. It’s a great color composition. It’s a little more idyllic and pastoral of an experience.”

The exceptional view is definitely the star attraction here — and ironically why restaurateur James Smith was at first reluctant to move into the building.

“When I first moved here my rule was if it has a view don’t eat there just because a lot of people pay for the view ” Smith says. “The food tends to suffer a little bit. Allan [business partner Allan Middleton] located this spot out here and I couldn’t turn it down. I figured I’d break my own rule and come out here a little early.”

Early as in before much of the community is complete. RiverLights eventually will be a sprawling community of 2 200 single-family homes but that’s a few years off. About 125 houses have been sold since the development officially opened in December.

Smith might have been taking a chance on opening a restaurant in the early stages of a development but so far it’s paying off.

“We stay constantly busy ” he says. “The worst part is telling people on Wednesday they can’t get a reservation for Friday.”

Smith and business partner Allan Middleton also own Fork N Cork the downtown Wilmington brunch and burgers establishment located a couple of blocks from a completely different stretch of the river. Smith originally planned to do another Fork N Cork on the site but changed his mind after seeing the location and the under-construction restaurant.

“I came out one day and you could barely see the gazebo because there was so much mist on the water ” Smith says. “Somebody from Newland had actually suggested Smoke on the Water as a name and it just clicked at that moment. We’re going to do barbecue you’re on the water smoke on the water. It sort of made sense and people liked it.”