Ripe for the Shucking 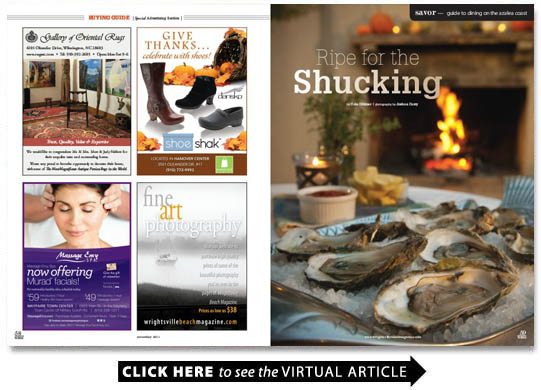 Slimy salty briny delicious? When it comes to food seldom are such unappetizing words used to describe what we eat.

When referring to the eastern oyster that beloved bivalve of the sound such qualities are sought and savored. While the flavor conjures thoughts of the muck and mire from where it came the time-honored process of harvesting preparing and consuming oysters behold some of the fondest memories for natives of the southeast.

No matter who you hear it from the setting of the story remains: a chilly day in one of the months that contain an “R ” a backyard complete with worn wooden tables an outdoor grill belching waves of steam a few bushels of oysters and most importantly a close group of friends and family for sharing them.

If any food deserves to be prepared according to the ways of old it should be the oyster.

Considering its odditiesits overall lack of caloric value supremely unique taste warty appearance and the challenges of collecting them from the soundsits a wonder that the oyster became such prized coastal fare.

Oysters have been an Atlantic seaboard delicacy enjoyed by Native Americans long before the arrival of the first English and Dutch explorers. Upon consuming the oysters early inhabitants would discard the empty shells into large piles known as oyster middens. With shells from the oldest-known oyster midden located in Dobbs Ferry New York being carbon dated to around 6950 B.C. the large quantities of oysters devoured by coastal Native Americans exhibited no evidence that any tribe relied solely on oysters for survival due in part to the fact that the caloric value of the oyster is so low. Because they may have easily found more nutritious food but chose to eat oysters the oyster may well have been as much a prized delicacy to Native Americans then as it is to many today.

Harvesting oysters is a backbreaking task just ask local oysterman Randy King. King has been harvesting oysters in the waters of the Intracoastal Waterway since the mid 80s providing oysters to local fish markets and restaurants like Dockside and Motts Channel Seafood.

Five-gallon bucket and welding hammer in hand King wades into the shallows of the ICW to scrape a living off its bottom-dwellers. “If youre going to harvest oysters for a living you really do have to love it because it is much harder than other types of fishing and at the end of a full day harvesting you dont make a whole lot ” King says.

Once the oyster is secured preparation methods vary. In one of Washington Irvings historical accounts of the colonial era he writes about a shipwrecked crew in New York harbor marooned on the island of Mana-hata. Faced with the daunting possibility of starvation the men were able to survive by roasting the oysters they collected from the shoreline.

Dire circumstances aside many local families still observe the oyster roast as a seasonal ritual. The only excuse the Ellis family needs is a cool weekend afternoon in late fall or winter. Lifelong purveyors of oysters from Scotland to Oregon and everywhere in between Phil and Trish Ellis say their favorite way to enjoy an oyster is with a few bushels of local oysters roasted on their backyard grill with a group of close friends and family members. Any doubt about this is quickly laid to rest when they pull out their oyster-shucking table custom-built by son Jeff. The octagonal table is fashioned with a large hole in the center perfect for the efficient discarding of empty oyster shells and is proudly festooned with the purple and yellow brand of Phil and Jeffs alma mater the East Carolina University Pirates.

The Ellises prefer them raw or steamed on their outdoor grill until they are as Phil says “rare so the shell is just barely open and has not lost any of the juices.” He is willing to accommodate guests who are not such seasoned oyster eaters allowing the oysters to continue to roast until medium about five minutes or even “well done so they bounce off the ground.”

When it comes to side dishes the Ellises are much less concerned with their preparation. “When you have an oyster roast the oysters are the focal point and everything else is in the periphery ” Phil says. However he does enjoy preparing a special hot sauce garnish a concoction of Texas Pete mignon sauce and apple cider vinegar.

After many years of roasting and consuming oysters the Ellises are still thinking of different ways to enjoy them. Phil says for a special treat he would love to saut spinach beforehand to make oysters Rockefeller at their next roast.

There are countless ways to eat and prepare oysters and it seems that each method has its own following of people who are convinced theirs is the best.