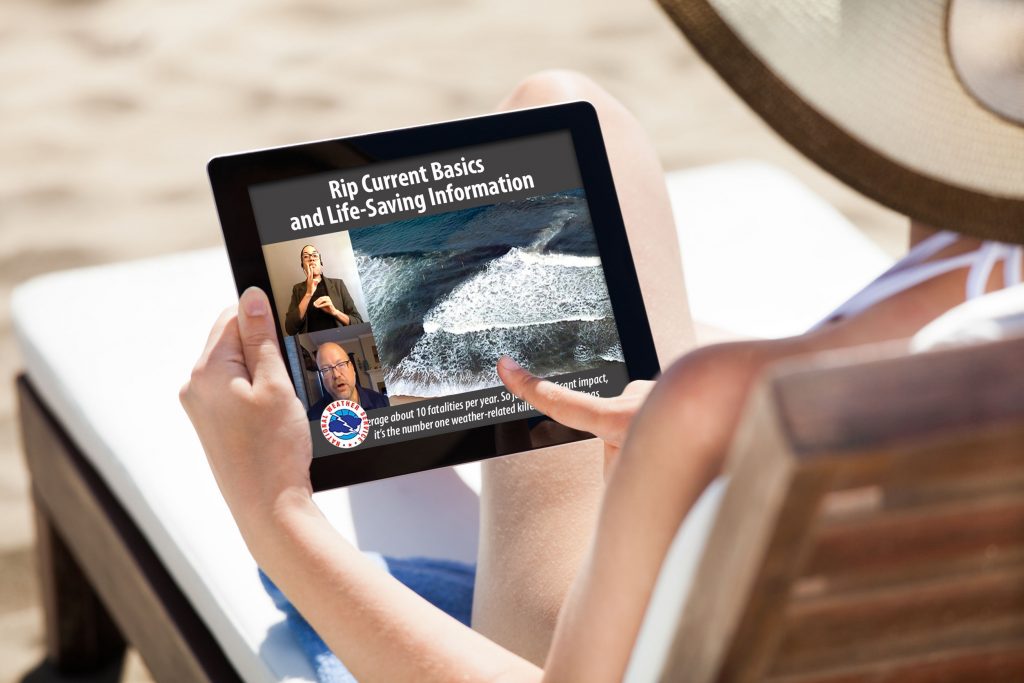 The N.C. Division of Services for the Deaf and Hard of Hearing provided an American Sign Language interpreter and captioning for a Rip Current Basics webinar presented by the National Weather Service Wilmington N.C.

The National Weather Service (NWS) posted a free webinar on its website to help people identify rip currents, escape, and help others. It details basic safety information, statistics, visual clues and why rip currents are so dangerous. The approximately hour-long event, which is fully captioned and includes an American Sign Language interpreter, can be found at www.weather.gov/ilm.

Steve Pfaff of the NWS begins the webinar with a discussion about how rips ­  — strong, narrow currents that flow away from the shore — typically occur within a short distance from the beach.

“Even though they’re in a small area, they have significant implications to people all across our country,” he says. “As far as the Carolinas go, we average about 10 fatalities per year. This makes it the number one weather-related killer in the Carolinas, and thousands of lives are lost each year around the world.”

Around 100 people nationwide die each year from rip currents. The goal of the webinar is to prevent fatalities by helping beachgoers become more self-sufficient in the water.

“Building community resiliency needs to be inclusive of everybody so that we can keep people safe,” Pfaff says.

In the webinar, Pfaff compares rip currents to a watery treadmill running away from the beach.

“If you don’t know how to get off that treadmill, you’re going to get into danger really quick,” he says.

Rip currents generally have a muddy appearance and choppy water, no breaking waves inside of them, and a darker appearance than surrounding areas. They usually end just after the point where waves break but can push someone hundreds of yards offshore.

“The best option is to just try to relax, and swim out of the rip current by swimming parallel,” says Mike Kochasic of the NWS.