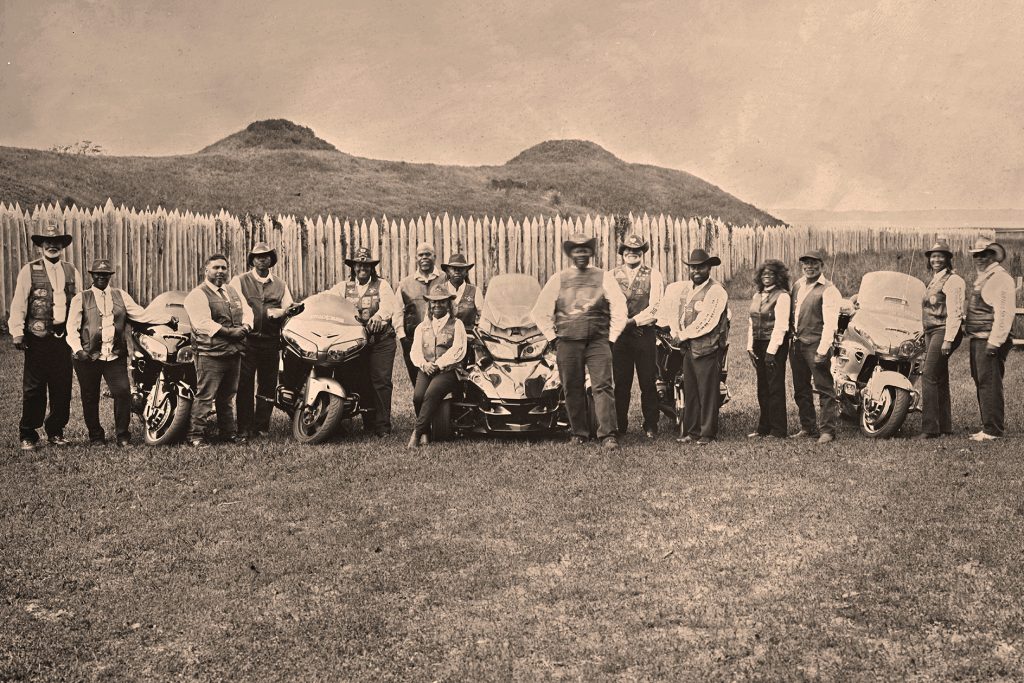 The motorcycle club is cruising down I-40 somewhere between Wilmington and Raleigh, out for a weekend ride, enjoying the freedom of the open road.

The bikers come upon a slower car. Tail rider and club vice president Radue “Zulu” Shakur radios ahead to lead rider and club president Freddie “Fred Foxx” Graham. The group is well ahead of any cars in the passing lane, he reports. Graham acknowledges and moves over. The nearly two dozen club members follow. Shakur again radios ahead when he has cleared the car. Graham moves back over, followed by the other riders.

The movements are coordinated, precise, economical, and even friendly. The club members are quick with a nod or a wave to fellow motorists.

“It comes from years of trial and error,” Shakur says. “The lead bike, which is the president, and the rear bike, which is generally myself, we have communication over CB radios. If we’re transitioning from one lane to another, we’re communicating. I let him know the lane is secure. All the other bikes won’t move over until the president starts moving over. We do it in a military precision fashion.”

The military precision — which comes naturally for many of the riders, who are former servicemen and women — serves a couple of purposes. It adds a measure of safety for the two-wheeled motorists on dangerous highways mostly populated by four-wheeled cars and huge semis. Perhaps more importantly, it leaves a positive impression of the patch on the back of the vest worn by each rider.

These riders are members of the Wilmington Buffalo Soldiers Motorcycle Club, united by a passion for their bikes.

“When we’re out riding, we’re out fellowshipping,” Graham says. “We don’t have to be going to any particular event. We just enjoy the love of motorcycle riding.”

They are also united by their mission — to promote an important piece of American history, one that is largely unknown or forgotten.

“We are a very professional and proud group of motorcyclists who not only love motorcycling but the history of the original Buffalo Soldiers who we carry on our back,” Shakur says. “We carry those with pride. When we put those vests on, we’re not only protecting our core, but we are carrying the history of the original soldiers who we never want to forget.”

The Buffalo Soldiers date back to 1866, 17 months after the Civil War ended. Black soldiers had fought in the bloody conflict. The 37th Colored Infantry was involved in the first and second battles of Fort Fisher and the Carolinas Campaign. But they couldn’t enlist in the peacetime army until the 1866 act of Congress.

“The original Buffalo Soldiers were prior slaves, prior sharecroppers,” Shakur says. “They wanted to prove to the U.S. government they could be more than slaves, more than sharecroppers. They could be 100 percent men, just like white men. They served with honor.”

They served on the Western frontier, escorting settlers, cattle drives, and railroad crews. The 9th and 10th Cavalry regiments conducted campaigns against American Indian tribes from Montana to Texas, New Mexico, and Arizona.

Native Americans gave them the name “Buffalo Soldiers,” perhaps because of their winter coats made from buffalo hides, or because their courage and valor reminded the warriors of the mighty animal. The origins of the name are uncertain, but the Buffalo Soldiers National Museum in Houston notes the soldiers “accepted the badge of honor and wore it proudly.”

Buffalo Soldiers went on to serve in Mexico, Cuba and the Philippines. They fought in both world wars, and numerous other conflicts. They served with distinction and honor. The National Veterans Memorial and Museum says they had the lowest desertion and court-martial rates of their time, and many earned the Medal of Honor.

In 1992, President George H.W. Bush proclaimed July 28 as Buffalo Soldiers Day to celebrate their “outstanding legacy of service.” Bush acknowledged the historically important group’s contributions to the military and their country, even though “they often received the worst food and equipment and labored without the respect and recognition that were their due.”

Indeed, racism is an unfortunate part of the Buffalo Soldiers story. In the beginning, many white officers refused to command black regiments. They were separate units, but rarely equal.

“Those things were left out of history,” Shakur says. “If an African-American accomplished something, credit was given to a white soldier.”

And even though the army was officially integrated in 1948, the country was not. Segregation had the force of law in many states.

“The army was considered fully integrated at that point, but segregation and racism were still alive,” Shakur says.

The members of the Buffalo Soldiers Motorcycle Club are well aware of the history. They are required to learn it before putting on the vest.

“When probies are in line to try to get membership in the club, we make it a necessity they learn the history of the Buffalo Soldiers,” Shakur says. “It’s all about researching your own history. People aren’t just going to give it to you.”

That includes the history of the club. It’s a nationwide organization, started by Chicago police officer Ken Thomas in 1993. It spread to North Carolina in 2001, and to Wilmington in 2011 when Sam Splicer and four other bikers organized the local chapter. Graham soon became the sixth member.

“I was the club’s first probie,” he says. “That’s the step you go through to become a member. They started the club three months before I joined.”

The Wilmington chapter — which draws its members from New Hanover, Brunswick, Pender, Onslow and Columbus counties — is one of five in the state, and one of 120 in America.

The mission statement of the first chapter included the mandate that the club promote “a positive image among Blacks that would be respected in the community and throughout the country,” to “pay homage to and ensure the legacy of African-American military contributions in the post-Civil War era,” and to “share enlightenment of the heritage that African-Americans have played in the United States.”

The local affiliate shares that mandate to be role models and educators.

“Oftentimes we are invited to events, let’s say church events,” says Shakur, the club’s historian. “We discuss the history of the original Buffalo Soldiers and the motorcycle club with as much pride as we can. We’ve gone to schools and discussed the history. They are in awe. They’ve never heard it. This history, like much of our history, has been left out of our history books.”

The patches on the vests often provide another opportunity to talk about the Buffalo Soldiers when the group is out for a ride.

“It always sparks conversations,” Shakur says. “Some people have come to us, say when we’re out to eat. They have offered to pay for our lunch and engage in conversation. They want to know who are these people, what are they about?”

Motorcycle clubs don’t always have the best reputation. Think “biker” and a negative image might emerge. But much like their original namesake, Wilmington’s Buffalo Soldiers have earned respect.

In February, thousands of people lined the streets as Wilmington native Antonio Moore returned home after being killed during a rollover accident while serving with the U.S. Army in Syria. Leading the procession were the Buffalo Soldiers.

“We were approached by the family to escort his remains from the airport to the funeral home,” Graham says. “We led from the church to his final resting place. We have requests like that all the time. It’s like Zulu says. People say, ‘who are you, we didn’t know we had a Buffalo Soldiers club’. We go to schools and enlighten people on who we are.”

Harry Taylor used a historic technique called wet plate collodion to make photographs of the Wilmington Buffalo Soldiers Motorcycle Club at Fort Fisher. The process originated in 1851 and was used to document the Civil War and much of the Western expansion. It requires a mobile darkroom, seven chemicals and a large view camera mounted on a sturdy tripod. The processing of each plate requires seven minutes.

The legacy of the original Buffalo Soldiers transcends space and time, their persistence and determination influenced future generations so their memory would never be left behind.

Faced with unimaginable hardships, broken bodies and torn clothes, this didn’t hinder their mission, it only fortified their souls.

So here we stand, emerged from the battlefields of segregation as the next generation, still making history, still defying odds, still holding it down, but as a National Association.

The N.A.B.S.T.M.C. was established to honor the Buffalo Soldiers of history, so that we may tell our own stories of bravery and remove the clouds of mystery.

We must understand that justice to our truth will remain undone as long as someone else is giving “their” account of “our” day in the sun.

So sit back and relax and allow me to educate you on a few Buffalo Soldier Carolina facts.

They understood then, like we understand today, in order for our community to succeed academically and economically, a pound of flesh we all must pay.

Through the years the Mother Chapter has grown and has raised 4 more chapters along the way, still strong in her commitment, guided by an unyielding moral compass while under the command of none other than Mr. J.

FACT: With Greensboro soldiers having a lot to offer too, in 2006 somehow they knew, they too established a chapter and began to pursue a worthwhile mission, because it’s what we do!!!!

FACT: In 2008 Charlotte’s troop “F” stood up, so they could represent. The Queen City Soldiers were now on a quest to keep the legacy full affect, holding this history high and never letting it fall to neglect.

FACT: In 2010 Raleigh stepped into the light so they too could shine, giving their time at community functions and finding worthwhile charities they could support and stand behind.

FACT: In 2011 we the Wilmington Buffalo Soldiers crew made our humble debut. With just five dedicated souls, just enough to secure our stronghold. In and out of the Port City we maintained a high visibility. We could be seen at Azalea and Pine Tree festivals, on Veteran’s Day’s and MLK parades.

And in our midst was an original Buffalo Soldier, Honorary member and a man of highest caliber, Rest in peace Mr. Leroy McAlister.

We support our area Christmas toy drive, 13th St. House for Women, Fran’s Fans, established this scholarship drive, have charity rides and give to families in need to help rebuild their lives.

Fayetteville, Greensboro, Charlotte, Raleigh and, yes, Wilmington, your host for today! We greet you all with much love and respect for the support you’ve show in coming our way.