Riders on the Beach: Sand Peddlers 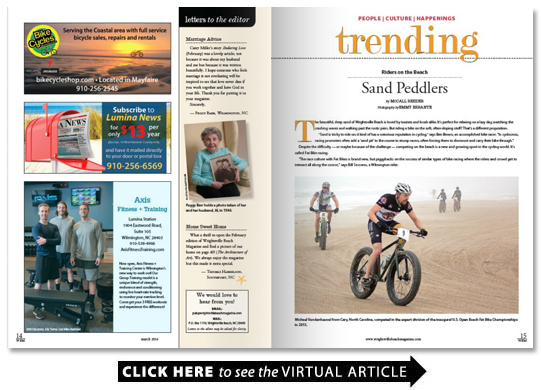 The beautiful deep sand of Wrightsville Beach is loved by tourists and locals alike. It’s perfect for relaxing on a lazy day watching the crashing waves and walking past the rustic piers. But riding a bike on the soft often-sloping stuff? That’s a different proposition.

“Sand is tricky to ride on; it kind of has a notorious reputation in cycling ” says Ben Brown an accomplished bike racer. “In cyclocross racing promoters often add a ‘sand pit’ to the course to stump racers often forcing them to dismount and carry their bike through.”

Despite the difficulty — or maybe because of the challenge — competing on the beach is a new and growing sport in the cycling world. It’s called Fat Bike racing.

“The race culture with Fat Bikes is brand new but piggybacks on the success of similar types of bike racing where the riders and crowd get to interact all along the course ” says Bill Sessoms a Wilmington rider.

Fat Bikes look exactly like the name implies: big bikes with wide tires. They were created to coast over snowfields but the same principles of grip and displacement make them suited to riding on the sand.

The second annual US Open Fat Bike Beach Championship is scheduled for March 12 on Wrightsville Beach. The race is designed to challenge the competitors while also being fun and entertaining to watch. There are three categories of races: 8 16 or 24 miles also known as the Fat Really Fat and Super Fat races.

“The course is designed to be super spectator friendly ” says Shawn Spencer the event chair and owner of Bike Cycles.

The new sport generates a complex new culture within the biking community. It’s all about people looking for a good time on the beach riders looking for a new challenge in the sand or both.

“The type of racers drawn to this type of riding are those looking to have a little more fun or those who maybe want a new challenge ” says Brown last year’s Super Fat champion. “Riding a 4.25-inch tire through sand on the beach with the ocean roaring in the background is a new experience for almost all riders let alone racing a fat bike on a cyclocross-style course set up at the beach.”

Brown 36 has been racing bikes since he was 14. He competes in the Coastal Carolina Off-Road Series USA Cycling’s Southern Classic Mountain Bike Series and in the Leadville 100 mountain bike race in Leadville Colorado. He has raced in cyclocross events. But last year’s race at Wrightsville Beach was his first experience competing on the sand.

“Shawn took a huge step forward for the Fat Bike community when he created this event ” Brown says. “It not only brought racers like me from other genres of cycling to the race it created a huge awareness of Fat Biking in the Wilmington and Wrightsville Beach communities.”

Brown isn’t the only avid biker to take on the new race. Sessoms also experienced Fat Bike racing for the first time in 2015 winning the Really Fat category.

“Shawn let me borrow a bike and I loved it as it was easy to pick up ” he says. “I ended up buying one for myself three months later.”

Sessoms and Brown hope to defend their titles this year. But that’s just part of the reason they’ll be back on the sand.

“Like any bike race the competition is only one aspect of the event ” Brown says. “Cyclists are a very tight-knit group and enjoy the post-race camaraderie and friendships just as much as the race itself.”

Like other forms of cycling it’s not just for racers. Recreational riders in the beach community are also taking to it.

“Go to the beach on any given day and I guarantee you will see multiple people riding a fat bike ” Brown says.