Return of the Wahine 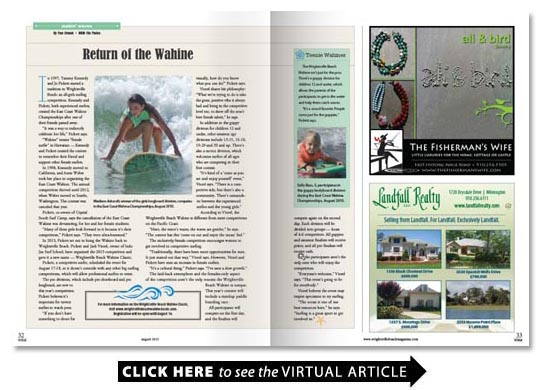 In 1997 Tammy Kennedy started a tradition in Wrightsville Beach: an all-girls surfing competition. Kennedy an experienced surfer created the East Coast Wahine Championships after one of her friends passed away.

It was a way to indirectly celebrate her life says Jo Pickett Wrightsvilles leading wahine.

In 1998 Kennedy moved to California and Anne Weber took her place in organizing the East Coast Wahine. The annual competition thrived until 2012 when Weber moved to Seattle Washington. The contest was canceled that year.

Pickett owner of Crystal South Surf Camp says the cancellation of the East Coast Wahine was devastating for her and her female students.

Many of these girls look forward to it because its their competition Pickett says. They were ultra-bummed.

In 2013 Pickett set out to bring the Wahine back to Wrightsville Beach. Pickett and Jack Viorel owner of Indo Jax Surf School have organized the 2013 competition and gave it a new name Wrightsville Beach Wahine Classic.

Pickett a competitive surfer scheduled the event for August 17-18 so it doesnt coincide with any other big surfing competitions which will allow professional surfers to enter.

The pro divisions which include pro shortboard and pro longboard are new to this years competition. Pickett believes its important for novice surfers to watch pros.

If you dont have something to shoot for visually how do you know what you can do? Pickett says.

Viorel shares his philosophy: What were trying to do is take the great positive vibe it always had and bring in the competitive level too to show off the areas best female talent he says.

In addition to the guppy division for children 12 and under other amateur age divisions include 13-15 16-18 19-29 and 30 and up. Theres also a novice division which welcomes surfers of all ages who are competing in their first contest.

Its kind of a come as you are and enjoy yourself event Viorel says. There is a competitive side but theres also a community. Theres camaraderie between the experienced surfers and the young girls.

According to Viorel the Wrightsville Beach Wahine is different from most competitions on the Pacific Coast.

Here the waters warm the waves are gentler he says. The contest has this come on out and enjoy the ocean feel.

The exclusively female competition encourages women to get involved in competitive surfing.

Traditionally there have been more opportunities for men. It just started out that way Viorel says. However Viorel and Pickett have seen an increase in female surfers.

The laid-back atmosphere and the females-only aspect of the competition arent the only reasons the Wrightsville Beach Wahine is unique. This years contest will include a standup paddle boarding race.

But the participants arent the only ones who will enjoy the competition.

Everyones welcome Viorel says. This events going to be for everybody.

Viorel believes the event may inspire spectators to try surfing.

The ocean is one of our best resources here he says. Surfing is a great sport to get involved in.

The Wrightsville Beach Wahine isnt just for the pros. Theres a Teenie Wahine division for children 10 and under which allows the parents of the participants to get in the water and help them catch waves. A guppy division 12 and under is a competitive division.

Its a crowd favorite. People come just for the guppies Pickett says.

For more information on the Wrightsville Beach Wahine Classic visit www.wrightsvillebeachwahineclassic.com. Registration will be open until August 16.