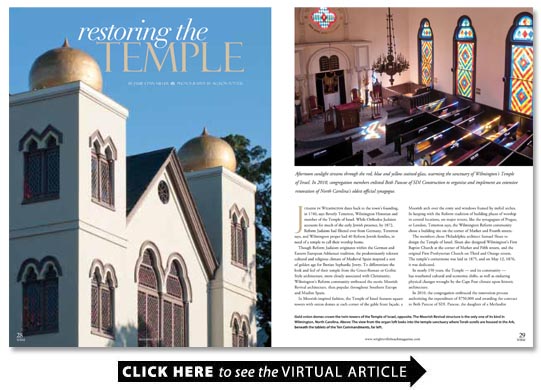 Judaism in Wilmington dates back to the towns founding in 1740 says Beverly Tetterton Wilmington Historian and member of the Temple of Israel. While Orthodox Judaism accounts for much of the early Jewish presence by 1872 Reform Judaism had filtered over from Germany Tetterton says and Wilmington proper had 40 Reform Jewish families in need of a temple to call their worship home.

Though Reform Judaism originates within the German and Eastern European Ashkenazi tradition the predominantly tolerant cultural and religious climate of Medieval Spain inspired a sort of golden age for Iberian Sephardic Jewry. To differentiate the look and feel of their temple from the Greco-Roman or Gothic Style architecture more closely associated with Christianity Wilmingtons Reform community embraced the exotic Moorish Revival architecture then popular throughout Southern Europe and Muslim Spain.

In Moorish-inspired fashion the Temple of Israel features square towers with onion domes at each corner of the gable front fa�ade a Moorish arch over the entry and windows framed by trefoil arches. In keeping with the Reform tradition of building places of worship in central locations on major streets like the synagogues of Prague or London Tetterton says the Wilmington Reform community chose a building site on the corner of Market and Fourth streets.

The members chose Philadelphia architect Samuel Sloan to design the Temple of Israel. Sloan also designed Wilmingtons First Baptist Church at the corner of Market and Fifth streets and the original First Presbyterian Church on Third and Orange streets. The temples cornerstone was laid in 1875 and on May 12 1876 it was dedicated.

In nearly 150 years the Temple  and its community  has weathered cultural and economic shifts as well as enduring physical changes wrought by the Cape Fear climate upon historic architecture.

In 2010 the congregation embraced the renovation process authorizing the expenditure of $750 000 and awarding the contract to Beth Pancoe of SDI. Pancoe the daughter of a Methodist preacher and now a Temple of Israel member and her team assessed the buildings needs and then set about meeting them: from restoring the front door and exterior details to carefully handling each jewel-toned pane of stained-glass SDI tackled the daunting task one detail at a time.

I love saving old buildings Pancoe says. I mean how many people can take care of something that has issues and parameters? We had the best time discovering things.

Fiberglass was used to restore and preserve many of the temples key components beginning with its Moorish Fourth Street fa�ade.

We took out the gorgeous bell-shaped windows and cast the horizontal windowsills and the molds all with fiberglass Pancoe explains.

The exterior of the temple is made of brick extending into the foyer nearly 16 inches thick.

We took out each rectangle of original brick near the front window Pancoe says and the mortar would just blow in your face.

Covered with masonry the exterior fa�ade is scored to resemble large blocks of stone a convention that Tetterson says can also be found on other landmark structures built during the same era Thalian Hall for one.

In the sanctuary and cresting over the front entrance are the temples centuries-old stained-glass. The glass itself comes from France the red yellow and blue panes are Bavarian colors arranged in Moorish design. For the painstaking task of preserving the original stained-glass Pancoe enlisted Mildred Spivey a stained-glass expert to assist in the meticulous handling of the sanctuarys windows.

It took us two to three weeks to do each stained-glass window Pancoe says. Each eight-foot tall window was removed in whole and taken to the SDI warehouse located in Wilmingtons Delgado neighborhood.

We created skinny little bathtubs and put vinegar in them and then soaked each window for about a week Pancoe says. We invented our own water pick and removed the cement off the little diamond-shaped panes of glass and cleaned each one individually.

Broken glass panes were saved and instead of replacing them Spivey soldered the spaces in between as well as both sides of the windows.

To take a window out  and then put it back is amazing Pancoe says.

Today the temple is one of fewer than 30 congregations to endure in its original 19th century structure and history is writ throughout. During the restoration SDI preserved the Temples original elements and artifacts many of which are still intact. Among them is the original heart pine door.

We took the doors apart literally every piece of wood Pancoe explains and we noticed the doorknob was moved higher  because people grew taller over the centuries.

The design over the front doors features a crescent moon and a single star set in side a circular field of blue surrounded by panes of purple green and turquoise glass.

Painted over the sanctuary doors is the inscription: Blessed is he Who cometh in the name of the Lord in intricately-rendered gold-leaf writing However the Temple is neither the only nor the first Wilmington place of worship to welcome the reverent with these exact words. While the inscription was originally intended for the temple the blessing was accidentally painted over the sanctuary doors at neighboring St. James Church. Realizing the mistake the craftsman then painted the same words over the temples archway; ultimately both church and temple decided to keep the hand-painted blessings.

Continuing through the sanctuary the eye is drawn toward the Temples original chandelier a work of art from the Turkish Revival tradition dating back to the late 18th/early 19th century. Just as the celebration of Hanukkah remembers the gift of light that enabled ancient Jews to rebuild the Great Temple which the Syrians had destroyed through a miraculous eight-day supply of oil to light their way the use of oil and simple candlelight is a mainstay of Jewish tradition. The chandelier was originally lit with oil then candles and then gas. Since 1904 the chandelier has been lit by electricity but the Judenstern or Sabbath lamp used by Jews throughout the Middle Ages was originally lit by oil and now only by candles. The Temple of IsraelsJudenstern rests in its foyer and dates back to the mid-19th century.

The pews are original to the building and similarly reflect the Moorish style as do the wooden columns bolstering the upper balcony anchored by the pipe organ. Reform Jews unlike most sectors of Judaism use organs during their worship services. Installed in 1906 and funded by the Ladies Concordia Society the majestic wood and brass Pilcher-Tracker organ was restored in 1990. Its the only one of three such organs that remains in use in the United States and is still considered Wilmingtons oldest church organ.

While the ancient Jews faced the heat of the deserts Wilmingtons Reform Jews have the humidity. A key part of the restoration focused on combating the weathering effects of the surrounding climateand air-conditioning.

The ceilings had black mold on the inside Pancoe says because the top would heat up and the cold affects the bottom; we blew in about 20 inches of insulation which keeps the temperature the same on both sides of the wood.

There was a time however when congregants tried to worship at the Temple without air-
conditioning  as in before it was available even the Rabbi needed faith.

Does the Jewish God take summers off in Wilmington? asked Rabbi Samuel Mendelsohn the temples first rabbi who presided over the congregation for 46 years.

We created a whole book as to how to take care of the place says Pancoe with a laugh. Remodeling takes an unbelievable number of tools.

In 2012 the Temple of Israel received Historic Wilmington Foundations David Brinkley Preservationist of the Year for outstanding rehabilitation and restoration of North Carolinas oldest Jewish Synagogue.