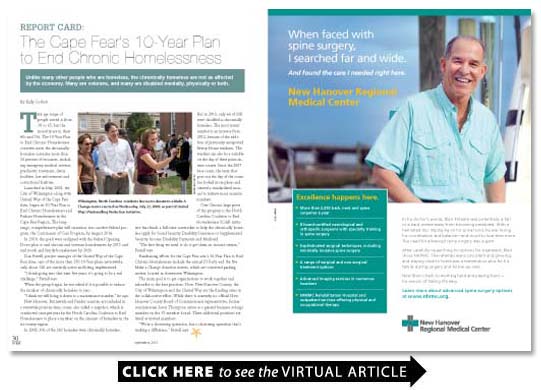 Unlike many other people who are homeless the chronically homeless are not as affected by the economy. Many are veterans and many are disabled mentally physically or both.

The age range of people served is from 18 to 65 but the majority are in their 40s and 50s. The 10-Year Plan to End Chronic Homelessness overview states the chronically homeless consume more than 50 percent of resources including emergency medical services psychiatric treatment detox facilities law enforcement and correctional facilities.

Launched in May 2008 the City of Wilmington along with United Way of the Cape Fear Area began its 10-Year Plan to End Chronic Homelessness and Reduce Homelessness in the Cape Fear Region. The long-range comprehensive plan will transition into another federal program the Continuum of Care Program by August 2014.

Dan Ferrell project manager of the United Way of the Cape Fear Area says of the more than 350 10-Year plans nationwide only about 120 are currently active and being implemented.

I think going into that next five years its going to be a real challenge Ferrell says.

When the group began he was asked if it is possible to reduce the number of chronically homeless to zero.

I think we will bring it down to a maintenance number he says.

New Hanover Brunswick and Pender counties are included in a statewide point-in-time count also called a snapshot which is conducted once per year by the North Carolina Coalition to End Homelessness to place a number on the amount of homeless in the tri-county region.

In 2008 106 of the 392 homeless were chronically homeless. But in 2013 only 64 of 338 were classified as chronically homeless. The most recent number is an increase from 2012 because of the addition of previously unreported Mercy House residents. The weather can also be a variable on the day of these point-in-time counts. Since the 2007 base count the team that goes out the day of the count has looked more places and created a standardized manual to retrieve more accurate numbers.

One Chronic large piece of the program is the North Carolina Coalition to End Homelessness SOAR initiative that funds a full-time caseworker to help the chronically homeless apply for Social Security Disability Insurance or Supplemental Security Income Disability Payments and Medicaid.

The first thing we need to do is get them an income stream Ferrell says.

Fundraising efforts for the Cape Fear areas 10-Year Plan to End Chronic Homelessness include the annual PJ Party and the five Make a Change donation meters which are converted parking meters located in downtown Wilmington.

The main goal is to get organizations to work together and subscribe to the best practices. Now New Hanover County the City of Wilmington and the United Way are the funding arms in the collaborative effort. While there is currently no official New Hanover County Board of Commissioners representative former commissioner Jason Thompson serves as a general business at-large member on the 15-member board. Three additional positions are listed as invited members.