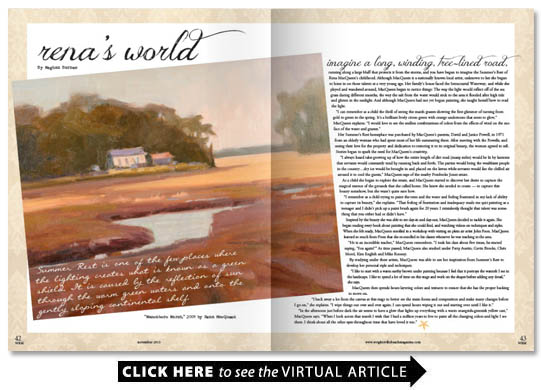 Imagine a long winding tree-lined road running along a large bluff that protects it from the storms and you have begun to imagine the Summers Rest of Rena MacQueens childhood. Although MacQueen is a nationally known local artist unknown to her she began to hone in on those talents at a very young age. Her familys house faced the Intracoastal Waterway and while she played and wandered around MacQueen began to notice things: The way the light would reflect off of the sea grass during different months the way the salt from the water would stick to the area it flooded after high tide and glisten in the sunlight. And although MacQueen had not yet begun painting she taught herself how to read the light.

I can remember as a child the thrill of seeing the marsh grasses showing the first glimmer of turning from gold to green in the spring. Its a brilliant lively citron green with orange undertones that seem to glow MacQueen explains. I would love to see the endless combinations of colors from the effects of wind on the surface of the water and grasses.

Her Summers Rest homeplace was purchased by MacQueens parents David and Janice Powell in 1971 from an elderly woman who had spent most of her life summering there. After meeting with the Powells and seeing their love for the property and dedication to restoring it to its original beauty the woman agreed to sell. Stories began to spark the need for MacQueens creativity.

I always heard tales growing up of how the entire length of dirt road (many miles) would be lit by lanterns that servants would constantly tend by running back and forth. The parties would bring the wealthiest people in the country — dry ice would be brought in and placed on the lawns while servants would fan the chilled air around it to cool the guests MacQueen says of the nearby Pembroke Jones estate.

As a child she began to explore the estate and MacQueen started to discover her desire to capture the magical essence of the grounds that she called home. She knew she needed to create — to capture this beauty somehow but she wasnt quite sure how.

I remember as a child trying to paint the trees and the water and feeling frustrated in my lack of ability to capture its beauty she explains. That feeling of frustration and inadequacy made me quit painting as a teenager and I didnt pick up a paint brush again for 20 years. I mistakenly thought that talent was something that you either had or didnt have.

Inspired by the beauty she was able to see day-in and day-out MacQueen decided to tackle it again. She began reading every book about painting that she could find and watching videos on techniques and styles. When she felt ready MacQueen enrolled in a workshop with visiting en plein air artist John Poon. MacQueen learned so much from Poon that she re-enrolled in his classes whenever he was teaching in the area.

By studying under these artists MacQueen was able to use her inspiration from Summers Rest to develop her personal style and techniques.

I like to start with a warm earthy brown under painting because I feel that it portrays the warmth I see in the landscape. I like to spend a lot of time on this stage and work on the shapes before adding any detail she says.

MacQueen then spends hours layering colors and textures to ensure that she has the proper backing to move on.

Summer Rest is one of the few places where the lighting creates what is known as a green shield. It is caused by the reflection of sun through the warm green waters and onto the gently sloping continental shelf.

I back away a lot from the canvas at this stage to better see the main forms and composition and make many changes before I go on she explains. I wipe things out over and over again. I can spend hours wiping it out and starting over until I like it.

In the afternoon just before dark the air seems to have a glow that lights up everything with a warm orangeish-greenish yellow cast MacQueen says. When I look across that marsh I wish that I had a million years to live to paint all the changing colors and light I see there. I think about all the other eyes throughout time that have loved it too.