Remember When: Stories from a Charter Boat Captain 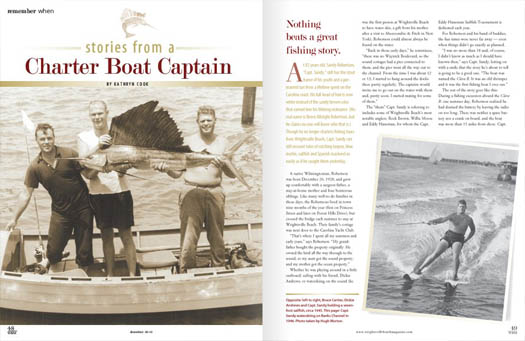 Nothing beats a great fishing story.

At 82 years old Sandy Robertson “Capt. Sandy ” still has the stout frame of his youth and a permanent tan from a lifetime spent on the Carolina coast. His full head of hair is now white instead of the sandy brown color that earned him his lifelong nickname. (His real name is Reece Albright Robertson but he claims no one will know who that is.) Though he no longer charters fishing tours from Wrightsville Beach Capt. Sandy can still recount tales of catching tarpon blue marlin sailfish and Spanish mackerel as easily as if he caught them yesterday.

A native Wilmingtonian Robertson was born December 26 1928 and grew up comfortably with a surgeon father a stay-at-home mother and four boisterous siblings. Like many well-to-do families in those days the Robertsons lived in town nine months of the year (first on Princess Street and later on Forest Hills Drive) but crossed the bridge each summer to stay at Wrightsville Beach. Their familys cottage was next door to the Carolina Yacht Club.

“Thats where I spent all my summers and early years ” says Robertson. “My grandfather bought the property originally. He owned the land all the way through to the sound so my aunt got the sound property and my mother got the ocean property.”

Whether he was playing around in a little outboard sailing with his friend Dickie Andrews or waterskiing on the sound (he was the first person at Wrightsville Beach to have water skis a gift from his mother after a visit to Abercrombie & Fitch in New York) Robertson could almost always be found on the water.

“Back in those early days ” he reminisces “there was no Waynick Boulevard so the sound cottages had a pier connected to them and the pier went all the way out to the channel. From the time I was about 12 or 13 I started to hang around the docks there pretty regularly. The captains would invite me to go out on the water with them and pretty soon I started mating for some of them.”

The “them” Capt. Sandy is referring to includes some of Wrightsville Beachs most notable anglers: Rock Brown Willie Moore and Eddy Haneman for whom the Capt. Eddy Haneman Sailfish Tournament is dedicated each year.

For Robertson and his band of buddies the fun times were never far away even when things didnt go exactly as planned.

“I was no more than 18 and of course I didnt know as much as I should have known then ” says Capt. Sandy letting on with a smile that the story hes about to tell is going to be a good one. “The boat was named the Clara B. It was an old shrimper and it was the first fishing boat I ever ran.”

The rest of the story goes like this: During a fishing excursion aboard the Clara B. one summer day Robertson realized he had drained the battery by leaving the radio on too long. There was neither a spare battery nor a crank on board and the boat was more than 15 miles from shore. Capt. Sandy decided to make his own crank using a piece of galvanized pipe he cut down from one of the boats outriggers. With the sky growing dark and the Clara B.s passengers growing more anxious Sandy inserted his homemade crank into the engine nearly turning it over on the first attempt. On the next try however he watched helplessly as the drill bit popped out of the crank and zipped through the narrow porthole into the deep blue abyss.

“The odds of that drill bit going through the porthole were about 1 000 to one ” says Robertson in retrospect. “That porthole wasnt much bigger around than a lamp and that was the only drill bit I had.”

So Capt. Sandy his first mate and their fishing party of five did the only thing they could they waited. “My friends decided something was wrong when I hadnt come back in at dark ” says Robertson. “John Colucci a friend of mine had an airplane so he flew out to see if he could find us. I did have a flashlight and I signaled him with it when he flew over. I knew then that at some point someone would be back out to help us.”

That someone was Capt. Eddy who arrived at the Clara B. the next morning at daylight spare battery in tow.

“I hooked up the new battery and we came on home. From that day on they called me Capt. Overnight. I didnt appreciate it a whole lot but there wasnt much I could do about it anyway ” Robertson says with a laugh.

“It was a real fishing boat ” says Robertson. “Those days we were fishing the Jim-Jam wed go out to Frying Pan Shoals. You could go down there in the fall particularly and it was a good place for billfish to congregate. We used to enjoy fishing down there.”

Capt. Sandy especially enjoys telling one story from Frying Pan Shoals. He was attending UNC at the time and would drive back from Chapel Hill nearly every weekend to run the Jim-Jam. His good friend and roommate Henry “Geechie” Conner would often accompany him and serve as the first mate. One day Robertson and Geechie had taken a party out to fish when another captain told them to be on the lookout for small sailfish around the Shoals. Toward the end of the day with coolers full of Spanish mackerel Sandy remembers seeing something tap on the line. “I looked back and here was this little bill sticking up out of the water ” he says. Knowing that bill belonged to one of those small and rare sailfish he had been alerted about Sandy shouted to Geechie to shut the engine down.

“We got that fish right up to the stern and as we were pulling him up he dropped off. Well I was about ready to go in after him ” says Capt. Sandy laughing at the memory. “But Geechie looked down and saw the fish had gotten a Clarkspoon caught in its sail pocket. We got it just out of the water and I grabbed the bill and we pulled it in.”

Back on shore Capt. Sandy gave the fish to Capt. Eddy to send to Al Pflueger the legendary taxidermist from south Florida. “Back in those days ” says Robertson “the original fish skin was used for mounts. You had to skin the fish and send the whole skin head and everything in. Today you give them the measurements and they build a fiberglass-type body to fit them.”

Nearly 60 years later that same sailfish is still mounted and hung on the wall of Capt. Sandys home office pretty incredible when you consider that the typical skin mount lasts only 15 to 30 years at best. “It did fall off the wall a few times and a dog we had ate the bill of it once ” says Robertson “but I just sent it back in.”

Several years after catching the sailfish at Frying Pan Shoals Sandy landed another classic catch. It was July 1957 and 28-year-old Capt. Sandy made headlines when he caught a 41.5- pound tarpon in only 15 minutes setting a new record for the quickest catch in southeastern North Carolina. The five-foot-long silver-coated tarpon was displayed at the legendary Newells Department Store on Lumina Avenue for years. “Lester [Newell] was a good friend ” says Capt. Sandy “and he told me one time If you ever catch a small tarpon Id like to have it to mount and put in the store. So thats what I did.”

In 1984 Capt. Sandy caught something other than a fish. His daughter Chase called to tell him that the mothers of two of her friends had gone waterskiing in Masons Inlet and were missing. Robertson went looking for them and found them just in time. The two women had nearly drowned after a strong current swept them out to sea. One of the women couldnt swim and was clutching nothing but a ski belt when we found them. “After a few weeks I saw her at the YMCA ” says Capt. Sandy “and she thanked me and told me she was there taking swimming lessons.”

Only a few months later Robertson had a hand in one of his very best fishing stories. On the wall of his home office near the mounted sailfish and the family photographs and the fishing rods is a framed Certificate of Merit from the United States Coast Guard. It was awarded to Robertson in 1984 after with his son Pages help he rescued four men who had capsized at Dallas Rock about eight nautical miles off Masons Inlet. Capt. Sandy and Page risked their lives to save the men after the Coast Guard determined it was too dangerous to attempt a rescue. (This later led U.S. Congressman Charlie Rose to initiate a federal investigation into the Coast Guards practices and procedures.)

Ten years later Page went on to win the prestigious Big Rock Blue Marlin Tournament in 1994. “My son is a fisherman. A real fisherman ” Capt. Sandy says proudly. “Im just a novice compared to him.”

Capt. Sandy tells you fishing stories about the days he spent as captain of the Clara B. and the Rip Tide and the Jim-Jam about his time mating for Capt. Eddy on the Martha Ellen and for Capt. Willie Moore on the Valhalla about bringing home prize-winning bluefish and sailfish and dolphin and saving a few folks along the way. Hell tell you stories about Wrightsville Beach back in the day too before Wings and Waynick Boulevard and even before water skis. He tells the stories and somehow you feel a piece of Wrightsville being saved too.