Remember When: A Time & Place for Family 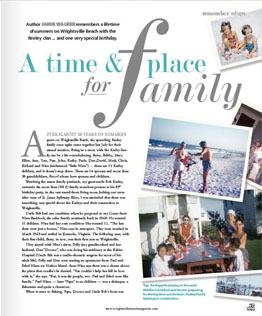 After almost 60 years of summers spent on Wrightsville Beach the sprawling Keeley family once again came together last July for their annual reunion. Being in a room with the Keeley family can be a bit overwhelming. Betsy Bobby Mary Ellen Ann Tom Pam John Kathy Paula Dan David Mark Chris Richard and Nina (nicknamed “little Nina”) there are 15 Keeley children and it doesnt stop there. There are 14 spouses and more than 30 grandchildren five of whom have spouses and children.

Watching the astute family patriarch my great-uncle Bob Keeley entertain the more than 100 (!) family members present at his 89th birthday party in the vast sound-front living room belting out verse after verse of St. James Infirmary Blues I was reminded that there was something very special about the Keeleys and their connection to Wrightsville.

Uncle Bob had one condition when he proposed to my Great-Aunt Nina Braddock the calm family matriarch back in 1948: He wanted 11 children. Nina had her own condition: She wanted 12. “The last three were just a bonus ” Nina says in retrospect. They were married in March 1949 and settled in Roanoke Virginia. The following year with their first child Betsy in tow was their first year at Wrightsville.

They stayed with Ninas sister Polly (my grandmother) and her husband Dan “Doctor ” who was doing his residency at the Babies Hospital (Uncle Bob was a cardio-thoracic surgeon for most of his adult life). Polly and Dan were renting an apartment from Paul and Ethel Hines on Harbor Island. Aunt Nina says there was a charm about the place that couldnt be denied. “You couldnt help but fall in love with it ” she says. “But it was the people too. Paul and Ethel were like family.” Paul Hines later “Papa” to us children was a shrimper a fisherman and quite a character.

When it came to fishing Papa Doctor and Uncle Bobs boat was the boat of plenty. On the bad days theyd catch 20 or 30 (mostly Spanish). On the good days theyd catch 60 or more. Papa took it upon himself to show Doctor and Uncle Bob the ropes. “After probably 10 years of fishing with Paul I was at the helm one day taking us through the inlet and Paul looked at me and said It might just be time you became my apprentice ” Bob says with a smile. Motoring through the inlet back then was certainly not for amateurs. There were no jetties no rocks and no walls. “It was pretty hairy ” Uncle Bob says. “You had to ride a wave to make it through the inlet.”

There could be no greater challenge though than leaving the beach each year with all 15 children in tow. The Keeley entourage grew at a rate of one per year for nine years in a row. The other six were spaced two years apart. Aunt Ninas secret for keeping them together was bright-orange and plaid life jackets as big as some of the children and a lot of help from her three sisters. “If it wasnt for Polly some of these children might not be here!” Aunt Nina says laughing. When asked what she remembers most about those many summers at Wrightsville she replies with a grin: “Counting!”

The Keeleys grew in size and number and slowly began shedding the life jackets as their parents and Grandma and Doctor found ways to rein them in. “Its funny because we didnt even realize it. Now that Im a parent I see that there was a lot of planning and a lot of work involved in showing us a good time and keeping us out of trouble ” John Keeley number seven says.

Doctor helped the children collect piles of lumber that washed up onto Shell Island then a vast wonderland of the thousands of shells it was named for and built a large lean-to that entertained them for days. There were the fishing contests the shrimping and crabbing devices they conjured up (with Papas help) used at low tide in the Causeway shell painting literally “cranking” out the ice cream flashlights on the beach (searching for night crawlers) surfing riding scooters and sailing. And of course there were the infamous Keeley Kite Races 18 -20 kites in a row along the beach; the first one to keep it maxed out the longest won. Occasional sabotage was expected and tolerated by the older kids but Doctor saw to it that the younger ones got a leg up: He tickled the older ones until they could barely hold on to the string.

The Keeleys initially spent their summers at the Young apartments but as the family grew they found themselves in various places closer to Johnnie Mercers pier. Each of the children was allowed to bring one cardboard tomato box filled with only the necessities. “We needed a U-haul to get down here!” Bob says. Their boat of a station wagon was stacked to the roof with cardboard boxes each one labeled with one of 15 names.

Every year upon arrival Bob would visit Mr. Newell at Wrightsvilles iconic Newells (where Wings is now) to furnish the annual kite race. And each year he and Doctor would try to persuade Mr. Newell to sell the quaint cottage Newell and his wife owned on the sound side of Atlanta Street. “When are you going to move out and sell that house to Polly and Dan?” Bob would ask Mr. Newell. Finally in 1974 Mr. Newells answer was “Im ready.”

“It was a dream come true ” says Bob.

The white green-shuttered cottage at 7 West Atlanta Street with its giant yellow kitchen table faded shag carpet and sweeping porch that sheltered generations became the meeting spot for the Keeleys the place where they made some of their fondest memories.

Doctors boat the Polly B. became Uncle Bobs nemesis. Uncle Bob who owned the Blue King would rally the troops for the daily 6 a.m. fishing trip (that remains a ritual to this day). Doctor and his crew would badger Uncle Bob and his crew over the radio often boasting about a catch they hadnt yet caught.

When both boats returned Uncle Bob and Doctor and their crews would line up their fish on the chopping block on the pier to see who caught the biggest one. The fish seemed endless back then. If the catch dwindled superstition prevailed. Aunt Nina and Grandma became the lucky charms that brought in the fish. They would tease Uncle Bob and Doctor that if the boys wanted to eat fish while they were at the beach theyd have to let the girls tag along to show them how its done.

With the new house came new projects. “[The grown-ups] could make anything seem like fun ” David Keeley number 11 says. Die-hard tinkerers Uncle Bob and Doctor could spend an entire day working on a washing machine taking it apart just to see if they could put it back together again. They worked on fishing rods bicycles and the infamous bulkhead that was patched and painted almost every summer.

Keeley Wrightsville Beach memories are a string of pictures that the families share: the fresh-baked blueberry muffins that greeted all the fishergirls and boys at Grandmas big yellow table; peeling the piles of shrimp at the same table with the grown-ups; the fish fries at Papa and Nannys; the blackberry wine from Papas wine cellar the gaping holes between wooden planks at Johnnie Mercers Pier threatening to claim little legs if they werent careful (and the piers gentle sway in strong winds); the time Uncle Bob and Doctor dyed their hair jet black; all the boyfriends of the Keeley girls that Doctor tried to scare off; thousands of breakfasts at MOI; and Ms. Cross at Roberts Market.

“Ill never forget the time I got to the checkout counter with a basket full of groceries and realized Id forgotten my wallet ” Uncle Bob says. “I told Ms. Cross I couldnt pay; Id have to come back. She just handed me a hundred-dollar bill and said to come back with my wallet when I could. That doesnt happen everywhere.”

Wrightsville Beach was the place that the 15 Keeley kids roamed the beach and now its the place that their kids do the same thing. “Thats one thing that hasnt changed ” David says. “This place is just as charming as its always been. A lot of us live in Roanoke and dont see each other unless its at church or at a family function. The beach brings us together. This is the time and place for family.”

Watching the family gather around a table filled with enough food to feed 100 or more people it really doesnt feel much different than the same scene 20 years ago though Doctor has since passed and the house on West Atlanta Street is gone. The ukuleles that were played by the many musical Keeleys are now guitars and many of the old voices are new voices belonging to the next generation of Keeley children who sing as loudly and proudly as their parents.

But the voice that echoes in my mind belongs to the man whose birthday we are celebrating. Uncle Bob Keeley and Aunt Nina created more than a big family. They created a legacy of love and togetherness at Wrightsville Beach that endures to this day.