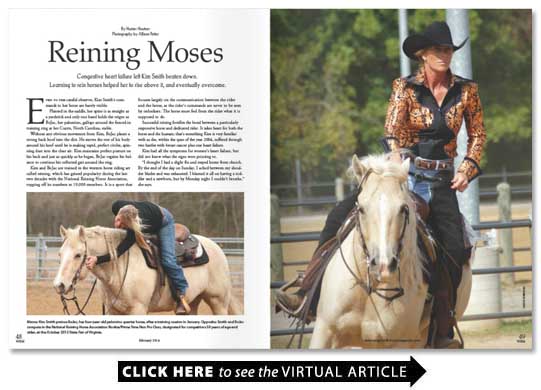 Congestive heart failure left Kim Smith beaten down. Learning to rein horses helped her to rise above it and eventually overcome.

Even to the careful observer Kim Smiths commands to her horse are barely visible.

Planted in the saddle her spine is as straight as a yardstick and only one hand holds the reigns as BoJac her palomino gallops around the fenced-in training ring at her Currie North Carolina stable.

Without any obvious movement from Kim BoJac plants a strong back hoof into the dirt. He moves the rest of his body around his hoof until he is making rapid perfect circles spinning dust into the clear air. Kim maintains perfect posture on his back and just as quickly as he began BoJac regains his balance to continue his collected gait around the ring.

Kim and BoJac are trained in the western horse riding art called reining which has gained popularity during the last two decades with the National Reining Horse Association topping off its numbers at 19 000 members. It is a sport that focuses largely on the communication between the rider and the horse as the rider s commands are never to be seen by onlookers. The horse must feel from the rider what it is supposed to do.

Successful reining fortifies the bond between a particularly responsive horse and dedicated rider. It takes heart for both the horse and the human; that s something Kim is very familiar with as she within the span of the year 2004 suffered through two battles with breast cancer plus one heart failure.

Kim had all the symptoms for women s heart failure but did not know what the signs were pointing to.

I thought I had a slight flu and stayed home from church. By the end of the day on Sunday I ached between my shoulder blades and was exhausted. I blamed it all on having a toddler and a newborn but by Monday night I couldn t breathe   she says.

It wasnt until she arrived in the emergency room that she learned that she was at a staggering 18 percent cardio output. Doctors told her family members to say their goodbyes.

Cardiovascular disease is the No. 1 killer in America. To raise awareness of heart disease at a national level February has been recognized by Congress as American Heart month since 1963. Ashley Miller the Cape Fear director of corporate relations for the American Heart Association reports heart disease caused 17 090 deaths among North Carolinians and was the cause of 22 percent of all deaths in 2010.

Miraculously Kim survived. Still she says she was thoroughly downtrodden after multiple intensive surgeries. Her recovery was slow. Limited by restricted movement she needed to find a hobby on which to focus her energy.

I looked like a scarecrow Kim says. My husband said I needed something to bring me back to life and when he brought up riding therapy my brain screamed  Yes! Yes! Absolutely! Ride ride ride!

She bought her first horse Moses so named because Kim had come out of bondage to sickness and death. The riding therapy immediately took effect.

Little did I know that one purchase would set on fire a desire so hot that I would work hard walking on a treadmill so that I d not lose energy while riding   she says.  I started lifting weights so that I d be able to lift the heavy saddles on my own. It was all very hard at first.

Motivated to work with Moses every day Kim grew stronger as her family watched and supported her. Eventually she and Moses began competing in reining.

Only two months after the heart failure Kim was weaned off of her medication. After four months she was taken completely off. She describes it as a miracle.

Kims passion and strength continue to grow. The stable has enhanced her therapy as she keeps up with grooming and riding and chasing her feisty border collie from the horse stalls.

I love my horses. I love coming out here   she says.  It s that love that drove me. It turned my circumstances around. I can ride and take care of my horses when before no one was even sure I was able to live. I just never gave up or gave in.