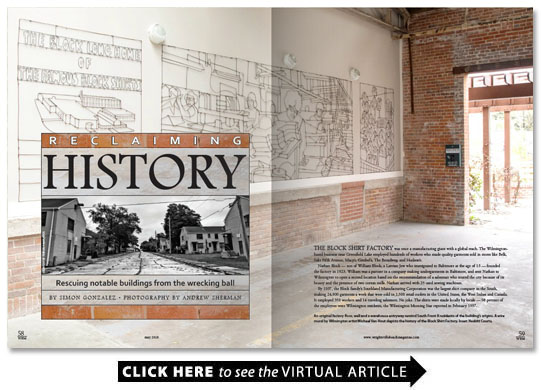 The Block Shirt Factory was once a manufacturing giant with a global reach. The Wilmington-based business near Greenfield Lake employed hundreds of workers who made quality garments sold in stores like Belk Saks Fifth Avenue Macy’s Gimbel’s The Broadway and Hudson’s.

Nathan Block — son of William Block a Latvian Jew who immigrated to Baltimore at the age of 13 — founded the factory in 1923. William was a partner in a company making undergarments in Baltimore and sent Nathan to Wilmington to open a second location based on the recommendation of a salesman who touted the city because of its beauty and the presence of two cotton mills. Nathan arrived with 25 used sewing machines.

By 1937 the Block family’s Southland Manufacturing Corporation was the largest shirt company in the South making 24 000 garments a week that were sold in 1 500 retail outlets in the United States the West Indies and Canada. It employed 350 workers and 14 traveling salesmen. No joke. The shirts were made locally by locals — 98 percent of the employees were Wilmington residents the Wilmington Morning Star reported in February 1937.

The factory was pressed into military service with the advent of World War II. About 1 800 dozen shirts a week 90 percent of production went to the U.S. Army.

The facility at 1510 S. Third Street continued to make quality shirts under labels like Sir William Freddie Boy Southland and Block. But eventually it became difficult to compete with companies with lower production costs. The corporation merged with National Services of Atlanta in 1972. Block factories opened in Mexico Arizona and the Dominican Republic. The business continued to grow; in 1985 the year Fred Block Nathan’s son resigned from Block Industries the company was grossing $100 million a year and Block shirts were carried in some 10 000 retail outlets nationwide. But fewer and fewer were made in Wilmington.

The Block Shirt Factory shuttered in 1991. The buildings stood empty. The south end of downtown was abandoned. No new business moved in. Structures that represented a significant part of Wilmington history seemed destined for the wrecking ball.

Across the street a similar story unfolded. Nesbitt Courts was constructed in 1940 as public housing in response to the population boom caused by the influx of workers building Liberty ships at the nearby shipyard. The community continued to grow after World War II with a neighborhood grocery store pharmacy and bakery and proximity to Greenfield Lake.

Then over time the area and the housing project fell into decline. The last families moved out in 2007 and Nesbitt Courts was scheduled for demolition.

But instead of destruction resurrection came to the Block Shirt Factory and Nesbitt Courts. The buildings that span Greenfield Street between Front and Third were renovated and given a new name — South Front District — and a new purpose. They are home to tony urban apartments and a pizza parlor owned by celebrity chef Vivian Howard and her husband Ben Knight.

“It’s an awesome example of adaptive reuse the integration of new architectural design and existing elements ” says Terry Espy principal with MoMentum Companies which developed the commercial components of the South Front District and board member of the Historic Wilmington Foundation. “It’s an amazing blend. It’s about not plowing everything down. And it’s a neighbor to Greenfield Lake Park which we tend to forget is one of the most beautiful in the state. It’s really taking Wilmington to another level. We’ve never had a viable warehouse district.”

Visionary Mark Maynard president and CEO of Wilmington-based Tribute Companies purchased the shirt factory in 1999 even though he didn’t have an idea for how to use it at the time.

“The Block family grew the business from a modest start into one of Wilmington’s largest employers ” Maynard says. “I thought it was a tremendous building with historic value and was worth saving. I’m a proponent of preserving instead of destroying and starting over. I have a real appreciation for restoring. When I started my business in 1985 I did a lot of restorations.”

It didn’t hurt that the unwanted buildings in a higher crime area were available at a substantial discount.

“My fundamental analysis when I wanted to buy it was the concrete in the floor was worth more than they were asking ” he says.

Maynard renovated the office portion of the old factory and moved Tribute’s corporate offices into the building. He used a portion of the warehouse for storage. Industrial and service companies leased some of the space.

With a good idea about both the challenges and the potential of the neighborhood Maynard also purchased Nesbitt Courts when it became available about 10 years later.

“I remember in the early 2000s there were police over there all the time ” he says. “There were drug deals some shootings deaths. It was a tough neighborhood. There were a lot of homeless people living in it. Most people thought the buildings were worthless and had a negative value. But I really appreciated the integrity of the buildings and thought there was the opportunity to do a redevelopment. They were incredibly well built. In lower income areas that can be associated with gentrification which can have negative effects. But it had been vacant for many years so we were not displacing people. It ignited an opportunity for the entire area.”

Rather than bulldoze the buildings and start over Tribute converted them into modern apartments. When they quickly filled up and a waiting list formed the Block Shirt Factory became South Front II with 54 apartments.

The decision to repurpose rather than demolish was made out of respect for Wilmington’s history.

“The buildings in the first phase of South Front were originally constructed prior to World War II by the Wilmington Housing Authority ” Maynard says. “These are wonderful examples of some of the oldest public housing still standing. We proudly repurposed these buildings into the South Front Apartments.”

Actually demolishing the old buildings would have been tough. They are so well built they wouldn’t go down without a fight.

“At one point the city gave them to the fire department and gave them permission to train and burn some of the buildings ” says Harris the architect for both phases of the South Front project. “It’s solid concrete. Even the floor of the second floor is 4-inch thick concrete. The buildings wouldn’t burn and they couldn’t drill holes for rescue. They couldn’t figure out how to get the project demolished it was so well built.”

Echoes of the past are in the floors walls and timbers.

“We worked really hard to preserve what we can ” says Molly McDonough Tribute’s regional manager for South Front. “There’s a lot of respect for all of these buildings. Something that Mark has really strived to do is keep the integrity and really respect the space we’re in. You’ll see a lot of photos of the past scattered throughout the buildings. It’s definitely something we’re proud of. The people who live in the apartments are able to say ‘Let me tell you what happened here.'”

Nesbitt Courts had 217 units. The new complex also has 217 units. The outside walls and inside staircases are original. An old boiler room became a 23-seat movie theater available for residents to reserve.

“We kept the historic character of the building intact ” Harris says. “The sturdiness and character was an asset not a liability.”

Tribute hoped the effort to preserve the past would qualify the project for historic tax credits.

But they couldn’t meet state requirements to keep every wall and bathroom in the same location.

“The housing project was designed in the ’30s ” Harris says. “The kitchen the bathrooms the bedrooms were small. There was no way we were going to be able to keep all the walls in place. Mark said we want to honor the building but if we can’t make it an attractive market venture it’s not worth it going forth. Our charge was to reimagine new apartments inside the shell that would fit the existing windows and doors. We kept the existing stairs. They are made of steel and kind of cool. It’s the same stair you would have seen in 1940.”

They have different floor plans with names from the past. There’s the Marilyn Monroe the Katherine Hepburn the Betty Davis.

“We wanted something quirky and odd ” McDonough says.

The apartments quickly filled up when they became available.

“Nobody knew if this was going to be a success or not ” Harris says. “It was very much a ‘build it and they will come’ attitude. If we did this well the original buildings and what we were putting inside them they would be so unique that if you wanted to live in a cool place this would be the coolest place you could rent.”

With the success of the Nesbitt Courts renovation the mandate became the same for the Block Shirt Factory: Renovate to modern standards while preserving as much as possible.

“The economy was stronger so it was not quite as much a leap into space as Nesbitt Court was ” Harris says. “Mark had a better idea it would succeed. If it worked for Nesbitt Courts our best and highest use for the Block building would be apartments as well. This was the perfect intersection of historic preservation and market forces.”

There’s an original fan in a hallway and an original warehouse door. Dormer skylights bring the outside in. The height of the factory allowed for loft units. Residents enjoy original walls floors beams and trusses.

“To the extent possible the trusses and fans are found objects that are repurposed to work in that situation ” Harris says.

The concrete floors are also original. In some spaces there’s a reminder that it used to be a factory floor.

“If you go in a unit you might see a big yellow line running through ” McDonough says.

Converting a factory into apartments allowed for more creativity than at Nesbitt Courts but presented a different set of challenges because of additions over the years.

“The Block building is interesting ” Harris says. “It’s three distinct buildings. The original was built in the 1880s the last one in the 1950s. We were not constrained to the number of apartments. But each separate building has different window heights and dimensions.”

Original factory walls and ceilings are a feature of the pizzeria next door as well. The restaurant was built in what had been warehouse space.

At the top of the street another historic building is being preserved. Tribute is converting a 100-year-old woodframe house into a bakery/coffee shop that will be run by PinPoint pastry chef Lydia Clopton.

It would have been cheaper to bulldoze the building and build from scratch than to renovate but Maynard’s preservation instincts kicked in again.

“That’s a great example of a classic modest home built in that era ” he says.

Tribute has more plans for the area. A commercial container village is going up between South Front II and the pizzeria. The old Capps Industrial Supply building at the bottom of the street will house a few tenants possibly including a grocery store.

“It was run-down. It was not a part of town anybody would want to go to ” Espy says. “An old shirt factory has become the only loft apartments in town. They have modern amenities and retain the character a little bit of the grunge. Wilmington has gone though periods of teardown but not now. Now it’s about being preservationist first preserving the past. It’s about enjoying the history.”