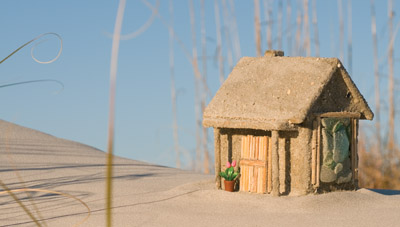 A year to remember in more ways than one. See how our sandcastles faired in the midst of one of the toughest eras in real estate. 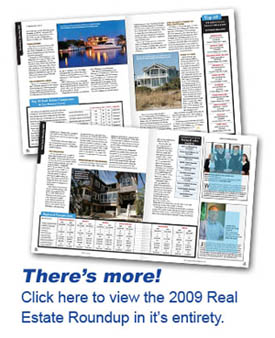 Three quarters of the way through the calendar year Wrightsville Realtors were within reach of bettering 2008s sales numbers. With 48 sales under their collective belts they had 14 pending sales waiting to close which told those watching that the year could very well end up tied with the previous years sales numbers. That was a milestone a lot of brokers wanted to hit.

Then things went pretty static but the market persevered. Wrightsville ended the year with 69 residential sales five more than 2008 plus one commercial lot sale and there were five in the waiting-to-close corral. With more than $65 million in sales volume considering the alternatives $1.2 million more for the year was a good finish.

Looking back it was not the out-of-the-park finish anyone hoped for but it left area Realtors encouraged for the year ahead.

“It was a challenging year to say the least ” says Intracoastal Realty broker Michelle Clark. “I believe 2009 was as good as it could have been. Better is better. As long as its not worse its moving in the right direction.”

Considering the alternative higher numbers of transactions is a good result. Sellers wont be so pleased however selling prices overall are slipping.

The top sale in the county was again at Figure Eight Island but that sale price of $3.4 million was down more than seven percent from the previous year. Debbie Mitchell broker at Intracoastal Realty said of the market in January “Wrightsville had a lot better year than the other parts of the county.” Of the more than 2 500 residential properties sold in the county 46 sold for more than $1 million dollars. Of these 56.5 percent were located at Wrightsville Beach (New Hanover County numbers are displayed in a chart below).

Sales volume in New Hanover County was down; posting a sold volume of just under $1.4 billion for 2009. While this was 80 percent of the previous years totals information supplied by the National Association of Realtors shows big increases in October and November sales for Wilmington reflecting a sharp increase over that same time period from the previous year. November alone reflected a 62-percent increase in sales volume over November 2008. Several area brokers noted what they described as a pick up or surge which started at summers end and note they didnt see that same pattern in 2007 or 2008. Several believe this may be a sign that the market has hit bottom as far as sales. This does not necessarily mean the bottom as far as prices.

Wrightsville By The Numbers

Overall sales and listing volumes combined for more than $130 million. With prices ranging from $195 000 for a summer rental efficiency condo (excluding the 1/10th sales) to the stunning $3.2 million boat-away-home on Parmele sales volume for the year was just over $65 million including Realtor-handled foreclosure sales.

Looking at which months Wrightsville properties were actually sold by quarter the first quarter saw just 14 properties go under contract: second quarter increased to 18. Third quarter saw a dramatic bump to 26 and the fourth quarter finished with eight properties going under contract before the years end. In contrast 10 closed the first quarter the second and third quarters had 23 each and the fourth quarter closed out with 13.

The year ended with the average list price at Wrightsville Beach up by 12.5 percent but at first blush the average sales price appeared to come in under $1 million which would be the first time that has occurred since 2004. Down 7.8 percent from $1 024 302 this average is misleading in that it includes three fractional 1/10th sales that correspondingly sold at 1/10 the price of a whole home (and of these two sold following foreclosure).

Attempting to gain a value more indicative of single family residential by factoring out those fractional sales and then removing the strictly vacation and rental ownership sales at Sand Peddler Shell Island and Summer Place but leaving in sales at Station One Wrightsville Dunes Beach Haven and the Doak a more valid adjusted sales average of $1 124 909 is achieved.

In 2009 one element at play for brokers was the difficulty with which sales were accomplished. Brokers report encountering challenges from negotiations through closings in a large percentage of their transactions. Everyone involved in the transaction was affected. “Everybodys beat up by the time you get to closing ” says Intracoastal Realty broker Alexander Koonce at the end of a particularity hard day. But his frustration “Everybody buyers sellers lender underwriters agent appraisers were all just worn out ” was echoed far and wide as the norm.The horror stories would be humorous if they werent so common and some so tragic.

Twenty-two true single-family residential homes sold at Wrightsville Beach in 2009. Some were new construction sitting empty top sales were of course waterfront and a few were of historic-age homes. Of these prices ranged from $457 500 to $3.2 million.

2009s big seller the new soundfront home at 3 Parmele Blvd. with a 30-foot boat slip closed September 15 at $3.2 million. The next top price at Wrightsville was $2.715 million for 2211 N. Lumina Ave. and coming in third was the Crocker house which brought $2.5 million.

The least expensive home to sell at Wrightsville was again a South Harbor Island single-story cottage 115 Cypress Avenue which went for $457 500 on September 11 2009.

The least expensive single-family home sale of the previous year was $550 000 for 18 Myrtle Court a modest near-water no-view one-story structure set up as side-by-side grandfathered apartments.

Not the oldest to sell but worthy of notice is the 1941 beach classic 4 East Fayetteville which sold at $1.375. Due to multiple offers the home sold for 104 percent of list price. Broker Bobby Brandon of Intracoastal Realty says “It was rare to have multiple offers but they had it priced correctly and they got activity.”

Still in the single family category 13 duplex townhouse/condo units those not in planned unit developments (PUD) sold with prices ranging from $575 000 to $2 150 000. One older brick single-story duplex on Coral Drive sold for $555 000.

Other townhouses and condos sales located in a developed neighborhood of more than two units:

Alexander Koonce who frequently works with spec home buyers describes the two types of buyer many brokers are seeing: The first “have just sold and they have been so beaten up on price they are determined to get it back. The other type is those who have not had to sell anything. These are your bottom feeders. They are convinced every seller is either in foreclosure or is desperate.”

Debbie Mitchell agrees but puts it more delicately. “There are people who have to sell. There are buyers who want a deal if not something they can outright steal ” she says.

Selling the highest in sales volume was Intracoastal Realtys Mark Bodford. Reached while on vacation in Brazil he commented on several of the houses he sold that had been on the market for 16 to 24 months and had not sold. “The year that we had last year was a cleansing process getting rid of these new properties and existing properties that had been on the market for a while.” He also says of his buyers “They came from North Carolina; Raleigh Greensboro and Fayetteville. And of the sales I had 4 were cash and the others were people just getting small loans.” It is noteworthy that Mark Bodfords sales included at least three of the top sales at Wrightsville; 3 Parmele 26 Pelican and 2 Mallard Street. 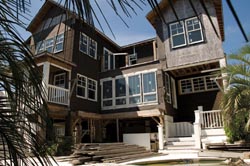 New Hanover County saw between 300 and 400 foreclosure properties and short sales. While Wrightsville saw at least four plus the forclosed fractional sales more are reported in the pipeline.

The numerous commercial “for sale/lease signs” dotting the landscape in New Hanover County tell the story. Following its normal pattern of lagging behind the residential housing cycle by approximately one year the commercial real estate market teeters on the edge of a precipice. One of the biggest challenges to play out locally in the market could be an unfolding slide in commercial real estate that will at best mirror the housing meltdown.

While credit was easy many commercial developers borrowed heavily. Now with bank failures cutbacks layoffs and business bankruptcies office and retail vacancies look to be the most prolific in a decade.

What effect the impending slide in the Wilmington commercial arena will have on buyers of Wrightsville residential and resort properties remains to be seen but it could dramatically affect the banking landscape already damaged by the collapse of Cape Fear and Cooperative banks. On January 11 Forbes.com put into words what many had feared about the coming correction: “In recent congressional testimony Federal Deposit Insurance Corp. Chair Sheila Bair indicated the continuing correction in commercial real estate prices constituted the most prominent area of risk for FDIC-insured institutions. There is a danger that commercial property losses coupled with further impairment of residential real estate portfolios could lead to a significant regional banking crisis.”

Just one sale was recorded in the commercial division at Wrightsville the commercial lot zoned C-3 located at 1 Marina Street which sold and closed in May for $800 000 100 percent of list price.

There is no money available locally to finance a commercial purchase development or speculative building. Builder/developer Nathan Sanders who won approval to redevelop the MOI and Olympia restaurant sites into the towns first mixed-use development has shelved that plan. Instead he has reworked the former Olympia into a banquet meeting and wedding reception site while he waits for the commercial development scene to recover. “Ive never known for things to be like they are now ” Nathan Sanders says.

Jim Wallace of Intracoastal Realty and Steve Niemeyer founder of Wrightsville Builders have reportedly started Eastwood Property Group LLC with respected local developer Jon Vincent. Wallace said last month that he and the others are barred from discussing a bond in any way. Reports and chatter have surfaced that the group is seeking to raise $500 million to be invested in local commercial properties some of which are owned by the principles. Many are closely watching this in hopes that it will stabilize the county commercial market.

Ronnie Hunt of Team Hardee Hunt and Williams sums the year up this way: “Its been one of those years you are just glad to be done with it.”

In spite of the hard knocks compared to the rest of the nation and most parts of the state Wrightsville did OK with five additional transactions over 2008. Agents are encouraged by the number of showings reporting theyve had a lot of showings during both the end of the year and the first half of January. Not all are being converted into buyers but it does indicate interest in the market.

As an example the exceptional ocean front beach cottage at 807 S. Lumina Ave. listed for just under $3 million went under contract on January 18 2010. Many are hoping it is the sign of things to come.

Allison Bernhart at Landfall Realty puts her hope for 2010 into words “Were going to see an influx of those wanting to get out of the cold.”

“The real opportunity I have seen for buyers is a chance to buy premium property at a reasonable price ” Randy Williams says summing up what he feels this year has in store.

Please note: Information supplied from the Wilmington Regional Association of Realtors MLS System. It is not guaranteed to be accurate. Statistics are not final and could change.