Re-berth Along the Cape Fear 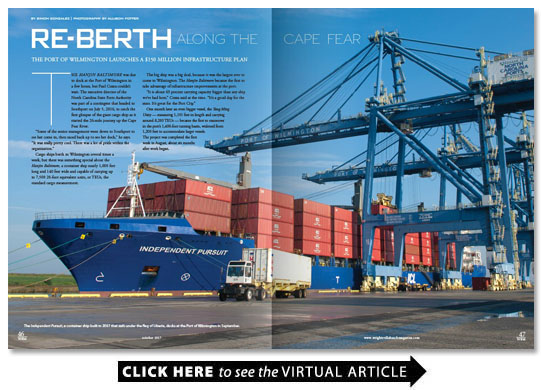 The Hanjin Baltimore was due to dock at the Port of Wilmington in a few hours but Paul Cozza couldn’t wait. The executive director of the North Carolina State Ports Authority was part of a contingent that headed to Southport on July 5 2016 to catch the first glimpse of the giant cargo ship as it started the 26-mile journey up the Cape Fear River.

“Some of the senior management went down to Southport to see her come in then raced back up to see her dock ” he says. “It was really pretty cool. There was a lot of pride within the organization.”

Cargo ships berth in Wilmington several times a week but there was something special about the Hanjin Baltimore a container ship nearly 1 000 feet long and 140 feet wide and capable of carrying up to 7 500 20-foot equivalent units or TEUs the standard cargo measurement.

The big ship was a big deal because it was the largest ever to come to Wilmington. The Hanjin Baltimore became the first to take advantage of infrastructure improvements at the port.

“It is about 63 percent carrying capacity bigger than any ship we’ve had here ” Cozza said at the time. “It’s a good day for the state. It’s great for the Port City.”

One month later an even bigger vessel the Yang Ming Unity — measuring 1 101 feet in length and carrying around 8 200 TEUs — became the first to maneuver in the port’s 1 400-foot turning basin widened from 1 200 feet to accommodate larger vessels. The project was completed the first week in August about six months after work began.

Wilmington is known as the Port City because goods have flowed in and out on the Cape Fear from the time the first settlement was established on the river’s banks in the early 18th century. But without the funding to widen the basin and conduct other infrastructure projects Cozza suggests the days as a major port might have been consigned to the history books.

“If we were not able to get the big ships in here we would probably be out of the container business ” he says. “That would have cemented a different future.”

Shipping and trade became the “lifeblood of the Cape Fear economy ” especially the export of naval stores — tar pitch and turpentine obtained from the longleaf pine forests supplied to the British Navy. During the Civil War Wilmington was a vital artery in the lifeline of the Confederacy. It was the last Southern port open to blockade runners before falling to Union forces in 1865.

The town’s docks again flourished after the war helping establish Wilmington as the largest city in the state by the end of the 19th century. Thecurrent riverfront Shipyard Boulevard and River Road location was the site of the North Carolina Shipbuilding Company which produced 243 merchant ships during World War II.

The state Legislature established the North Carolina Ports Authority in 1945 and authorized $7.5 million in bonds for construction and improvements in 1949. By 1952 the shipyard had been converted into a facility that would handle imports and exports on oceangoing vessels and the Port of Wilmington was open for business.

Although not as large as East Coast ports in Savannah Charleston and Norfolk the proximity to major markets in North Carolina and the Southeast made Wilmington viable.

But the shipping industry was changing. Bulk and breakbulk cargo — the kind packed into holds and retrieved through nets on cranes — is being phased out. Containers are the future.

Container shipping is simple and efficient. Goods are packed into 40-foot containers that are loaded onto the deck of a cargo vessel and quickly offloaded at the port of call. The containers are then transported by truck or train to their destination. “About 96 97 percent of global trade is containers ” Cozza says. “The container side is the growth side.”

In the mid ’70s the port authority purchased two container cranes and added four post-Panamax container cranes in 2007. The facilities were sufficient for cargo vessels carrying up to 4 500 TEUs.

But the industry was moving to bigger ships which could carry even more cargo. Projects to widen the Panama and Suez Canals ensured that the giant vessels were here to stay.

To remain competitive Wilmington needed to be able to accommodate the 10 000 TEU ships.

“We were in danger of becoming a boutique port ” says Cliff Pyron who served as senior manager for external affairs before being appointed to an economic development position in July part of an effort to attract new business.

After becoming executive director in March 2014 Cozza began looking at how to keep Wilmington “in the game.” “There was no plan out there so we put together a strategic plan ” Cozza says. “We looked at the things we needed to do on the infrastructure side to get the larger vessels in.”

The port launched a $150 million infrastructure plan mostly funded by the state legislature.

“The turning basin was the major thing we were after ” Cozza says. “That was one of the first objectives we had when we went to request help from our state leaders.”

The state was willing to make the investment because of the expected return. Numbers compiled by the Institute for Transportation Research and Education at North Carolina State University reveal that the state ports — including the one at Morehead City — are directly or indirectly responsible for more than 76 700 jobs across the state including more than 26 000 in southeastern North Carolina. Wilmington’s port directly employs some 200 people at the terminal and says it is indirectly responsible for an additional 2 000 jobs including truck drivers contractors and public/private partners. The ports generate $707 million in annual tax revenue. The annual economic contribution from goods moving through the ports is $14 billion.

“Our overall goal is to enhance the economy of the state ” Cozza says. Even before the widening project the port was growing. It moved just under 300 000 TEUs in each of the past two fiscal years.

The port hopes to double that in the next few years.

“We have a five-year strategic plan to double our container business and expand the business of our general terminals ” Pyron says. “We are executing an ongoing investment plan for channel terminal road and rail infrastructure to support growth.”

The plan includes a new docking berth by the end of 2018 and two new cranes within the next two years.

The port also expects to increase exports of agricultural products through a public/private partnership with USA Investco which built a 101 000-square-foot cold storage facility on the terminal grounds in 2016 with room for expansion. North Carolina ranks No. 1 nationally in sweet potato production No. 2 in pork and turkey production and No. 3 in poultry production. The refrigerated space will enable more of those products to be shipped around the world.

“This gives us the ability to export a lot of agriculture goods chickens turkeys sweet potatoes ” Cozza says.

Another public/private partnership is the two huge white domes constructed by Enviva to house wood pellets. Each dome can hold up to 45 000 metric tons of wood pellets which are loaded into containers and exported to Europe where they are replacing coal in energy production and home heating.

Wood products have become the No. 1 export out of Wilmington and helped the port achieve a export-import ratio of roughly 52-48 percent a rarity in the industry.

verybody knows Ameri�cans are consumers ” Pyron says. “If you look at statistics countrywide it’s about two-thirds coming in to one-third going out.”

The products can be quickly distributed around the state thanks to the return of rail service to the port.

Railroads were a vital contributor to Wilmington’s growth as a port and a city but the Atlantic Coast Line’s decision to move its headquarters to Jacksonville Florida in 1967 marked the demise of rail service.

In July CSX began operating the Queen City Express an intermodal freight line providing daily service between Wilmington and Charlotte. Containers are loaded onto flatbed cars and shipped to the state’s largest city. From there they can be transported throughout North Carolina and the Southeast.

“That will be a huge boon for the state ” Cozza says. “For 30 years we lost rail service.”

The public knows the port is there from glimpses of a big ship from the Cape Fear Memorial Bridge or the towering cranes from Shipyard Boulevard and Carolina Beach Road but Cozza acknowledges there’s some mystery surrounding what goes on. That could change with the expected growth.

“Everybody kind of knows about us but they don’t know what we do ” Cozza says. “They should know about the port. We’re the Port City.”