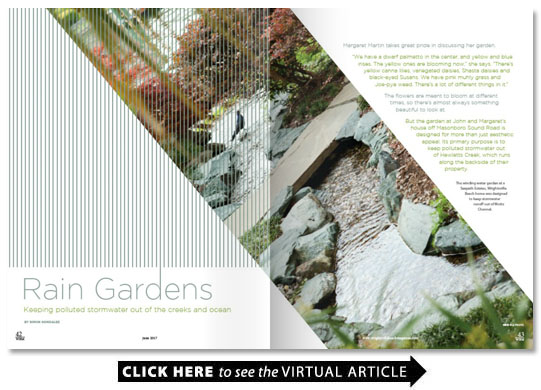 “We have a dwarf palmetto in the center and yellow and blue irises. The yellow ones are blooming now ” she says. “There’s yellow canna lilies variegated daisies Shasta daisies and black-eyed Susans. We have pink muhly grass and Joe-pye weed. There’s a lot of different things in it.”

The flowers are meant to bloom at different times so there’s almost always something beautiful to look at.

But the garden at John and Margaret’s house off Masonboro Sound Road is designed for more than just aesthetic appeal. Its primary purpose is to keep polluted stormwater out of Hewletts Creek which runs along the backside of their property.

“We were having a problem with the rainwater ” Margaret says. “It would all come flowing down the street into our driveway and into the creek. It was a lot of water. This was a way to help us deal with all that water and keep it from going into the creek.”

The garden is in a depression with sloped sides. It’s intended to hold stormwater until it can be absorbed into the ground rather than allowing it to run off.

“The goal is to handle rainwater on site ” says Beth Sheppard owner of landscape company Secret Gardener and designer of the Martins’ garden. “This is a creative functional opportunity for sustainable landscaping to keep the stormwater that falls on your property and environmentally take care of it. It’s where my passion is. I like to help people do something that’s good for the environment.”

The Martins have what is called a rain garden but they go by different names: ocean-friendly gardens vegetative swales bioretention areas. Whatever they are called the aim is the same.

“The purpose of all of them is twofold ” says Tracy Skrabal manager of the North Carolina Coastal Federation’s regional office in Wrightsville Beach. “No. 1 to help us infiltrate stormwater into the ground so it doesn’t ever reach our surface waters. But also it’s a great opportunity to increase our native plants for critters.”

The problem with stormwater is that it carries pollutants. When it runs unchecked it picks up all kinds of nasty things.

“The No. 1 pollutant in New Hanover County is animal waste ” says Dru Harrison director and community conservationist for the New Hanover Soil and Water Conservation District. “The top six are pet waste sediment fertilizer pesticides litter and liquids from cars.”

These are what is being washed into our streets and stormdrains everytime it rains. From there the water goes into creeks rivers and the ocean. In cases like the Martins’ before they installed their rain garden it bypasses the drains and runs directly into the waterways.

“People would be surprised how dirty the creeks are around here. It’s an ecological disaster ” says David Jacobs vice chair for the Cape Fear chapter of the Surfrider Foundation and a certified instructor for ocean-friendly gardens.

“People do paddleboard out in Hewletts Creek ” John Martin says. “We kayak and canoe on it. But I wouldn’t recommend eating shellfish out of it.”

Water quality isn’t the only thing at stake.

“Tourism and recreation revolve around water in this area ” Harrison says. “It’s an important economic driver. We don’t want a bunch of bacteria washing up on the beach.”

The old way of dealing with heavy rains was to funnel water into gutters and through downspouts to impervious surfaces like sloped driveways so it could find its way into the drains.

“The traditional stormwater management up until I’d say even a decade or two ago was let’s get all of our stormwater into drains into pipes and into the creeks ” Skrabal says. “Because then our houses don’t flood.”

Continued development on Wrightsville Beach and Wilmington exacerbates the problem. Green spaces are replaced with concrete allowing for more runoff of contaminated waters.

“Wrightsville Beach and every developed area — the more we replace native or natural soils and forest with areas of pavement the more we send polluted stormwater that’s carrying bacteria and sediment to our estuaries ” Skrabal says. “That has implications for the ecosystem. Around here it has really important implications for shellfishing waters and our swimming waters.”

There’s little that can be done to prevent the most prevalent source of pollution.

“We’re never going to stop the source ” Skrabal says. “Bacteria is present anywhere there is warm-blooded animals whether it’s wildlife or pets. It’s ubiquitous. And we’re never going to be able to treat the receiving waters when they are already full of bacteria. That’s not realistic.”

That’s why Skrabal and the Coastal Federation Jacobs and Surfrider and Harrison and the county are activity encouraging and educating any and all on solutions to keep it out of the water.

“You can have your cake and eat it too ” Skrabal says. “We can still have development and protect our waters. Because we have such sandy soil here all you have to do is direct it into a spot and it would have a dramatic effect.”

There are simple steps. Developers can use permeable concrete. Homeowners can use rain barrels to catch water coming off roofs and point downspouts into yards instead of down driveways.

And they can install rain gardens.

“They hold the water and let it soak into the ground ” Jacobs says. “The goal is to slow it down spread it out and soak it in. If everybody had ocean-friendly practices 90 percent of the pollution in our water would be eliminated.”

They come in all shapes and sizes from small home plots to large-scale municipal projects. But they all start the same way: by digging down.

“You dig a depression somewhere where you run all the downspouts into the depression to hold water for up to 48 hours ” Jacobs says. “It can be as simple as digging a good deep ditch with sod. It sounds more complicated that it is.”

Even though a good ditch can do the job the experts recommend filling the depression with native plants.

“They help hold the water until it soaks in ” Skrabal says. “They are disease resistant they are resilient to this climate and this community and you don’t have to water them. We’ve never watered or treated the plants in our rain gardens. Irises gladiolas palmettos — those are meant to get wet. For all intents and purposes it’s another beautiful little planted area. And they survive and thrive in these settings.”

The Coastal Federation has installed two gardens at its building in the town’s historic square on West Salisbury Street and a larger one at the head of the John Nesbitt Loop.

“There’s a street drain there that connected with other drains and went straight across into Lees Cut dumping all this hard surface stormwater ” Skrabal says. “We cut that line and redirected the flow into this area and created a lower basin and planted it with things that grow on this island naturally gorgeous plants. This holds a lot of stormwater before it overflows and goes out into Lees Cut. Our rain gardens drain in less than 24 hours no matter the size of the storm. We have really good infiltration rates. Could you say that everywhere? No of course not. But Wrightsville Beach is sandy.”

The Coastal Federation also has worked with the city and North Carolina State to install a rain garden at Bradley Creek Elementary School off Greenville Loop Road.

“The school is on 17 acres of land ” Skrabal says. “The headwater to Hewletts Creek is right there. Everything was designed to go straight into the top of the creek. It was the worst possible scenario. We put a wetland in the center a swale two rain gardens. It’s full of plants that flower at different times. They take classes out and use it as a living laboratory.”

Not all rain gardens need plants to be effective or to look beautiful. Art Padilla and Laura Lunsford got creative in finding a way to drain the stormwater off their home at Palmetto Drive and keep it out of Banks Channel and the Lollipop.

“We needed to do something with the water that comes off the roof ” Padilla says. “Someone suggested a pond with fish but I didn’t want to do that. I came up with the idea of doing a dry pond with rocks.”

He ran the idea by Will Hooker a friend who is a landscape architect and N.C. State professor.

“Will said ‘Why don’t we make it look like a wet pond with glass?'” Padilla says. “We dug a great big hole then we lined it with landscape cloth to keep weeds out. Then we put the glass on top of that. It’s really amazing when the water comes off the roof. It’s mesmerizing to look at it. It’s a garden feature that looks cool and it keeps water out of the sound. And I don’t have to worry about a koi pond and eagles landing in it and eating them.”

Padilla told Skrabal about his creations (he has two) and she had to check it out.

“He’s got a very cool rain garden ” Skrabal says. “The idea is exactly the same. He directs his downspout to an area he dug out and put sand at the bottom and then glass which is permeable. The effect is exactly what we would do with plants. He’s just doing it in an artistic way.”

With plants or without the idea is the same.

“The message always is let’s put in rain gardens and turn downspouts and stop sending stormwater to Lees Cut and Motts Channel and Banks Channel ” she says.