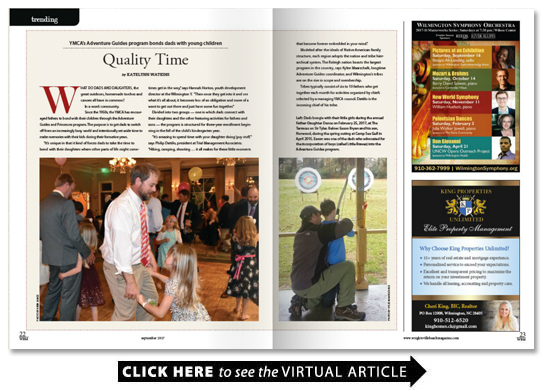 What do dads and daughters the great outdoors homemade torches and canoes all have in common?

In a word: community.

Since the 1950s the YMCA has encouraged fathers to bond with their children through the Adventure Guides and Princesses program. The purpose is to get dads to switch off from an increasingly busy world and intentionally set aside time to make memories with their kids during their formative years.

“It’s unique in that it kind of forces dads to take the time to bond with their daughters where other parts of life might sometimes get in the way ” says Hannah Horton youth development director at the Wilmington Y. “Then once they get into it and see what it’s all about it becomes less of an obligation and more of a want to get out there and just have some fun together.”

Divided into two groups — one in which dads connect with their daughters and the other featuring activities for fathers and sons — the program is structured for three-year enrollment beginning in the fall of the child’s kindergarten year.

“It’s amazing to spend time with your daughter doing ‘guy stuff ‘” says Philip Dattilo president at Trial Management Associates. “Hiking camping shooting � it all makes for these little moments that become forever embedded in your mind.”

Modeled after the ideals of Native American family structure each region adopts the nation and tribe hierarchical system. The Raleigh nation boasts the largest program in the country says Kylee Maarschalk longtime Adventure Guides coordinator and Wilmington’s tribes are on the rise in scope and membership.

Tribes typically consist of six to 10 fathers who get together each month for activities organized by chiefs selected by a managing YMCA council. Dattilo is the incoming chief of his tribe.

t the start of each year tribes and nations throughout eastern North Carolina gather for a fall outing at Camp Kirkwood outside Burgaw. The self-appointed names of the tribes are read handmade torches are lit and the new chiefs are presented. The nations recognize the end of each year at Camp Sea Gull near New Bern an area that some of the local dads know from their own childhoods.

“We have a chance to go away and camp with other kids and dads and expose the girls and ourselves to new activities but as someone who used to be a counselor at Camp Sea Gull it’s always great to go back and show my daughters where I used to hang out ” says Wilmington attorney Chris Behm former chief of the Waccamaw tribe.

Behm retired his vest and patches in May when his second daughter finished her three-year run with the Adventure Guides. In his six years with the program Behm took his daughters on a guided tour of the Black River on treasure hunts and through the process of building and sometimes successfully sailing a raft at camp.

The idea he says isn’t to earn the most badges or accumulate accolades — though those are available and appreciated too — but to spend the time as a tightly knit group and gain valuable experience with one’s daughter.

“The programs and outings are all about team building ” he says.

Whether the tribes choose activities from a list of suggestions or organize their own outings Behm says the program encourages dads to foster cooperative patterns among the kids and an appreciation for the nature of family as well as a sense of individual confidence when they learn a new skill.

“These formative years are some you’ll never get back ” Behm says. “We all say there are things we’d do of our own volition but without the impetus of some kind of peer pressure those everyday experiences tend to stay on a to-do list. This program takes spending quality time with your kids to a whole new and enriching level.”

Dattilo whose youngest daughter Sophia is entering her final year as an Adventure Guides and Princesses participant says there is a secondary benefit. It’s also a way for the dads to form friendships.

“You just have to jump in to see how important it is and not just for the kids ” he says. “It’s really something for the dads too. We have just as much fun as they do and create these lasting foundations with one another that go way beyond meeting once a month with our daughters.”

The program for dads and daughters has been the most popular but there has been a recent influx of father-son groups Maarschalk says. Retaining participants has proven to be a challenge but she is hopeful that word of mouth regarding the unique perspective on familial bonding versus the typical focus on achievements and badges will bolster membership.

After spending years coordinating the Adventure Guides program Maarschalk was happy to cede leadership to Horton who joined the staff in February after interning under Maarschalk.

Horton wants to grow all areas of the Adventure Guides and Princesses program.

“We’re hoping that we can get through to some surrounding areas with the need to experience the program to feel the energy and really branch out ” Horton says. “It helps people to know I think that we welcome nontraditional families too. The program is open to kids and their stepfathers uncles even grandparents if that’s what the situation happens to be.”