Pyrates of the Carolinas 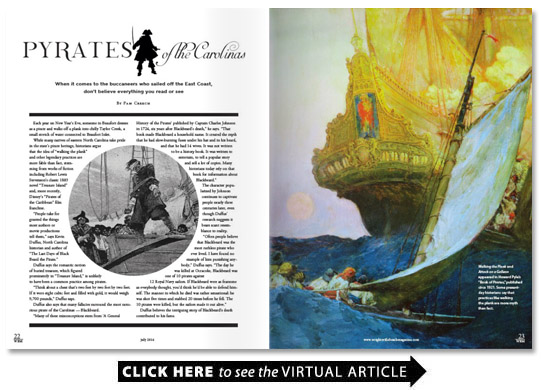 Each year on New Year’s Eve someone in Beaufort dresses as a pirate and walks off a plank into chilly Taylor Creek a small stretch of water connected to Beaufort Inlet.

While many natives of eastern North Carolina take pride in the state’s pirate heritage historians argue that the idea of “walking the plank” and other legendary practices are more fable than fact stemming from works of fiction including Robert Lewis Stevenson’s classic 1883 novel “Treasure Island” and more recently Disney’s “Pirates of the Caribbean” film franchise.

“People take for granted the things most authors or movie productions tell them ” says Kevin Duffus North Carolina historian and author of “The Last Days of Black Beard the Pirate.”

Duffus says the romantic notion of buried treasure which figured prominently in “Treasure Island ” is unlikely to have been a common practice among pirates.

Duffus also says that many fallacies surround the most notorious pirate of the Carolinas — Blackbeard.

“Many of these misconceptions stem from ‘A General History of the Pirates’ published by Captain Charles Johnson in 1724 six years after Blackbeard’s death ” he says. “That book made Blackbeard a household name. It created the myth that he had slow-burning fuses under his hat and in his beard and that he had 14 wives. It was not written to be a history book. It was written to entertain to tell a popular story and sell a lot of copies. Many historians today rely on that book for information about Blackbeard.”

“Often people believe that Blackbeard was the most ruthless pirate who ever lived. I have found no example of him punishing anybody ” Duffus says. “The day he was killed at Ocracoke Blackbeard was one of 10 pirates against 12 Royal Navy sailors. If Blackbeard were as fearsome as everybody thought you’d think he’d be able to defend himself. The manner in which he died was rather sensational: he was shot five times and stabbed 20 times before he fell. The 10 pirates were killed but the sailors made it out alive.”

Duffus believes the intriguing story of Blackbeard’s death contributed to his fame.

Although Blackbeard’s ship Queen Anne’s Revenge lies in water roughly one mile from the Beaufort Inlet Duffus does not believe the legend that Beaufort’s historic Hammock House belonged to Blackbeard.

“There’s no evidence that Blackbeard even set foot on what people now call Carteret County ” he says. “The notion that he had a house there is simply absurd.”

Duffus’ research uncovered that Blackbeard did set foot in Bath North Carolina’s oldest town. But anyone clinging to the idealized “Pirates of the Caribbean” notion of pirates as swashbuckling heroes will be disappointed in his purpose there.

“I traveled to courthouses in North Carolina and looked at property deeds. Those documents reveal that Blackbeard’s true treasure wasn’t gold or silver but it was African slaves ” Duffus says. “This is an aspect of history that a lot of historians don’t want people to know that pirates were involved with the slave trade. There were slaves on Blackbeard’s ship that helped with the transportation of slaves. They had a level of freedom we don’t necessarily associate with slavery. Blackbeard and his crew brought 60 slaves to Bath in the summer of 1718. Back then there was no slave market in North Carolina. Those people would have had to travel to a market in South Carolina or Virginia to purchase slaves. My findings are rather provocative and controversial.”

Blackbeard was also made famous by his blockade of the port of Charleston.

“Once Blackbeard’s men needed medicines that could only be found in Charleston ” says Wilmington-based historian Jack Fryar who has written more than 20 books about North Carolina and Cape Fear history. “To get what he needed he blockaded the harbor and took the leading citizens hostage aboard his ship. He said if anyone tried to stop him from getting what he wanted he’d kill the husbands and fathers on board.”

Maritime historian Baylus Brooks says despite the Hollywood stereotype of pirates plundering towns and villages many colonists depended on pirates to supply them with household goods.

“Our ancestors would have really appreciated pirates because they brought them things they wouldn’t normally have ” he says. “When you’re not used to sugar and someone brings it to you it’s a novelty. Spices were generally hard to get ahold of.”

Brooks says the pirates would steal the goods from ships en route to Europe from the Caribbean and bring them to colonists at discounted prices. “They were business men ” Brooks says. “People in colonial ports were happy to see them come in.”

Another misconception is that all pirates were men.

Anne Bonny born circa 1700 of an affair between Irish attorney William Cormack and his maid servant was one of the more well-known female pirates of the Carolinas.

“When the affair became known Cormack moved his family to the Carolinas and became rich off a large plantation. Anne was known for her temper. When she was 13 as the story goes she stabbed a servant girl with a knife in a fit of anger ” Fryar says.

Anne married pirate James Bonny and the two moved to the Bahamas where she had an affair with English pirate captain Jack Rackham commonly known as Calico Jack.

“When she and Jack stole a ship which they named the Revenge and set to sea as pirates she proved herself capable to the other members of the crew ” Fryar says. “She drank as a man fought as a man and killed as a man. And Anne wasn’t the only female pirate onboard the Revenge. Anne discovered Mary Read when she walked in on Read when she was dressing one day. Mary had been disguising herself as a boy.”

In Mary’s early adult life she ran an inn with her husband in England. After her husband died she used his old uniform to fool British army recruiters into thinking she was a man. Mary soon grew tired of life in the army so she deserted and boarded a ship bound for the West Indies.

In 1721 pirate hunters under Captain Jonathan Barnett a privateer with orders from the governor of Jamaica captured Calico Jack and his crew. Jack and his men were sentenced to hang but Bonny and Read both escaped by claiming to be pregnant.

“Upcoming motherhood did nothing to solve Anne Bonny’s piratical nature ” Fryar says. “In the hours she was allowed to see Jack Rackham before he was to hang she said ‘I’m sorry to see you here but if you’d fought like a man you’d need not hang like a dog.'”

Read died in prison in 1721 and Bonny disappeared from the history books shortly after.

Not all buccaneers came from rugged backgrounds. Stede Bonnet an educated Englishman who ran a sugar plantation in the Barbados abandoned his comforts for a life of piracy by buying his own pirate ship.

“As one story has it Bonnet’s sharp- tongued wife drove him to piracy. Perhaps he decided he’d rather risk hanging from the gallows than live with that woman anymore ” Fryar says. “He bought a sloop and outfitted it with 10 cannons. Pirates never did that; they usually stole the ships.”

Bonnet who served as a major in the British army before relocating to Barbados knew little about running a ship. He ran into Blackbeard in 1718. Under the pretense of working together the experienced pirate essentially took over Bonnet’s ship.

Bonnet eventually regained command and gained some notoriety. Then in August of 1718 he sailed into an estuary of the Cape Fear River near Southport to careen his ship. The vessel was spotted and reported to the governor of South Carolina Robert Johnson.

Johnson sent pirate hunters after Bonnet who surrendered along with his crew and was transported to Charleston. Twenty-five of Bonnet’s men were hanged but since Bonnet was a gentleman his punishment was imprisonment.

Bonnet escaped but was captured and immediately sent back to jail. After his second capture he tried writing a letter to Governor Johnson for a pardon.

“He said he’d been led astray by Blackbeard and nefarious types and that he’d seen the light and promised to set an example for boys and girls everywhere ” Fryar says.

Johnson was skeptical of Bonnet’s claims and sentenced the gentleman-turned-pirate to hang from the gallows.

History records that pirates like Bonnet and Blackbeard did plunder the East Coast from the Cape Fear to Currituck in the 1600s and 1700s. They are celebrated during events such as the Beaufort Pirate Invasion scheduled to take place August 12-13.

But while it’s fun to see swashbuckling reenactors wearing pirate clothing wandering the streets — including one with an authentic peg leg and parrot — much of it is part of North Carolina’s mythology not its true history.

“The average pirate was just a mariner ” Brooks says.