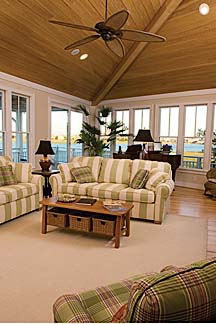 The carpenter-cum-building contractor says he has to pinch himself when he drives home at the end of the day to the house his firm built at the east end of Pelican Drive. The two-story asymmetrical shingled dwelling anchors Kenan’s Creek. Designed specifically for the site preserving water oaks planted by his mother Elizabeth Stone in the 1960s the lines of the house mimic a point in the landscape where the east and west elevations meet at an angle that resembles a ship’s prow as if the house were parting the waters of Lees Cut making for the Intracoastal Waterway.

Inside vintage oak doors hickory floors family antiques and art set the stage for a contemporary home that supports year-round living on the ground floor for Chris and his wife Rhesa with ample guest rooms upstairs for their four adult children and four grandchildren. The Stone house completed a year ago replaces a family-owned home that Chris built with his father Joe Stone on the same site 40 years ago.

“He built hundreds of houses on Wrightsville Beach ” Chris recalls. “We would live in one for a few months or a year or two and he’d get a good price for it and he’d sell it ” Chris says. “We’d build and move … all over north and south Harbor Island in probably eight or 10 different houses during my childhood.”

Chris Stone was an only child but by no means a lonely child. “I had a unique situation. My dad … used to work really hard for nine months and he would take the summers off with me and we’d sail and clam and fish and water ski. He was kind of like the local camp director for the neighborhood kids.”

“I started sailing and we actually constructed these boats in the downstairs of our house … on North Channel. It was a kit that we bought and we built them in the garage of our house. They were made out of marine plywood and glued together. They kind of looked like a surfboard. They didn’t have a cockpit in them or a place to put your feet. It was the forerunner of the Sunfish.”

“We always had some kind of little boat. Growing up from about the time I was 5 years old to about the time I was 14 I lived between the two bridges on North Channel Drive.” (His mother would caution him to stay between the bridges.) “We’d get real close where she couldn’t see us and we’d scoot out under the bridge and we’d be gone ” he admits now.

“We used to catch all of our seafood ” he says. Most of what was fetched — clams shrimp and flounder — was caught in Motts Channel and Banks Channel. With his skiff he pulled a small shrimp trawl and at times he made use of a lantern a gig and a pole.

Chris and his friends rode all over the beach on bicycles. “I had a paper route on Harbor Island which had maybe 200 or 300 residents and Wrightsville Beach didn’t have many more than that.” It was the 1960s and in those days Chris says there couldn’t have been between 300 and 400 people on the beach in the wintertime.

“It was a totally different world. We knew everybody who had a power boat … you could tell almost without even looking at them by the sound of the motor who they were. A chilly winter day now is about like the Fourth of July when I was growing up. That’s the difference.”

In the early ’60s Joe Stone bought a piece of property for development — from Lawrence Lee for whom Lees Cut was named — on which the Stone family would settle permanently. “My dad knew him personally and knew the family during the course of his construction career and ended up buying the property in ’63 or ’64 and developed it ” Chris says.

“In order for my father to sell these lots [the land and marsh] had to be dredged and filled. A lot of his close friends were his first customers ” he recalls. His father paid $100 000 for the parcel that extended from Kenan’s Creek west to the Intracoastal Waterway. In 1966 the father and son completed the first house on the site and the family moved into their home when Chris was in high school where he met Rhesa.

“I grew up in Wilmington ” Rhesa says. “Mom would bring us down to the yacht club every single day of the summer. We didn’t have air conditioning in our house. I knew of Chris because of sailing. We both sailed and we sailed a lot of races but I didn’t officially meet him until high school.”

In 1967 Chris graduated from New Hanover High School. “I ended up going to Wilmington College and she went off to Salem College … to study music. We got married our sophomore year ” Chris says. “We built the duplex next door and raised our family there. We lived there for 18 years.”

Their children three daughters and a son were reared to appreciate Rhesa’s love for music theater art and culture and their father’s love of fishing and outdoor living.

“They’ve done it all ” Rhesa says.

“When the kids were going to Wrightsville Beach there weren’t that many children there. You became friends with the kids that were in your class and they remained friends. There was a bond. They all learned to water ski before they were five or six ” she says.

“But they also went to concerts and they also took music and each one played an instrument.”

“When the kids were little you went to town once a week. You always made all the pediatrician appointments on one day because it was such a trek and now you go to town three or four times a day.”

“People would say ‘Why do you live at the beach?’ This was 30-some years ago.” Rhesa says. “They’d say ‘It’s so cold down there in the wintertime ’ and I would say ‘That’s my favorite time of year.’ The prettiest time is the winter. It’s clear. You can see underwater. The wildlife is wonderful. When you cross the drawbridge you’re safe nothing can get you you’re here ” she says. “It takes the edge off.”

Josh Stone now works with his father in the construction business. His sisters scattered between New York and Florida all relish the trips back home. “That speaks to the place ” Rhesa says. “Two of our children have children. They’re very insistent that their children grow up doing the same things that they did at the beach. It’s just a wonderful place to be.”

“It’s incredible ” Chris adds. “We truly love it. That back porch is the best place in the world …”