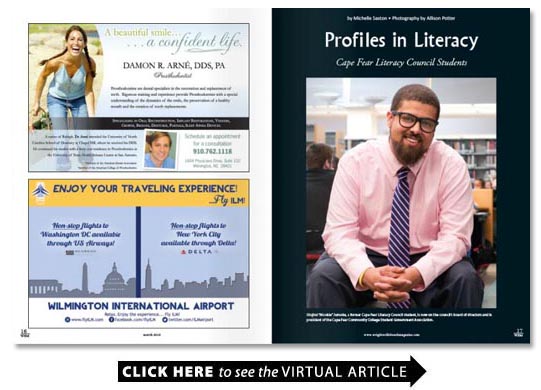 Like members of a small book club Mable Jones and Linda Thomas sit at a table in the New Hanover County Library reading poetry and discussing meanings of words such as covert and candid in Emily Dickinsons May Flower.

But there is a serious purpose to their meeting. Jones is studying to earn her GED and Thomas is her tutor.

The Cape Fear Literacy Council brought them together about five years ago after Jones a grandmother sought to earn her high school equivalency certificate. She noticed the independent nonprofits sign on her way home from working as a nanny one day and stopped.

I felt like my car just turned in there Jones says during a recent tutoring session. I really believe this.

Jones loved school and reading but struggled after becoming pregnant in high school.

Being sick and going through changes that I did not understand it led me not to go back to day school Jones says. She tried night school but had trouble keeping up.

I just decided to work to support my child. I just always kept in the back of my mind that one day Im going to go back Jones says later adding Shame played a big part of it. [I] didnt really know who to go to to help with my education but it was a thing that I never let go of.

It took some courage to come back Thomas says to her. You should be very proud of that.

Coming back was part of two goals for Jones who has reared her birth daughter and her adopted and foster children and cares for her mother. She wanted to renew her marriage vows with her husband in part to include her children and earn her GED to encourage them with their education.

Some of her children had asked about her diploma because they did not see it.

That was heartbreaking Jones says.

Her 20-year-old son earned his GED last year and said OK Mom what (are) you waiting on? Jones recalls.

Thomas a self-described voracious reader became a council volunteer tutor after retiring to in 2007. She previously worked as an administrator at the International Monetary Fund in

is so important Thomas says. Its a crime that people cant read or cant read well.

Thomas and Jones were paired up and hit it off right away. Thomas learned that Jones loved to read the Bible but with other books her list of favorite authors was limited.

So they went all over the map Thomas says reading poetry and stories by Maya Angelou and Eudora Welty and working on English grammar and essay writing.

We read everything from Shel Silverstein to Robert Frost Thomas says. And Mable loves to read. When she reads out loud shes got this lovely voice. You can tell shes got this huge pleasure in reading.

Tutoring sessions have evolved as Jones enrolled in s GED preparation program and Thomas has continued to be a source of encouragement.

Its building the confidence of the student thats so important Thomas says. Everybodys got the capacity to learn its just having the right resources and enough time.

I would love to continue my education Jones says of the future. This thing is so big in me.

Olujimi Mookie Jumoke who grew up in the area dropped out of school in the seventh grade due to problems with math and struggles with dyslexia and ADHD. Later after being jailed for a drug-related offense he worked toward earning his GED.

Jumoke whose mother taught him the importance of reading passed four of the five GED test portions. But he failed the math section about five times.

Every time I failed it was just like taking a piece out of me Jumoke says. It was kind of just draining my hope.

A woman at where the test was administered witnessed his frustration and gave him contact information for the literacy council.

Jumoke went to the council but was skeptical at first. He considered leaving the building until he overheard another new student say he just wanted to learn how to read his Bible.

There was something about that comment Jumoke says. He put some good energy in the universe.

Jumoke soon began working with a tutor he dubbed the corner man to his Muhammad Ali in the fight to learn math.

Shes from a totally different culture shes from the mountains and Im from Section 8 housing Jumoke says. We ended up really clicking. She became like a second mother to me.

Jumoke worked with his tutor for two years and earned his GED in 2010. He is now married has three children serves as president of CFCCs Student Government Association is on the
literacy councils board of directors and has been involved with other nonprofits.

Redemption is possible Jumoke says. It takes a lot of hard work and sacrifice.

He plans to graduate this year transfer to a university to further his studies and become a youth counselor.

They are changing lives Jumoke says of the literacy council. Im living proof.

Located on in a small building filled with books the Cape Fear Literacy Council offers free tutoring classes and a computer lab for Adult Basic Literacy English for Speakers of Other Languages and family literacy programs.

The council has about 80 adult literacy students and about 80 second language students for English staff members say.

A budget of about $400 000 covers skill books testing and staff time with revenues mainly from grants donations and fundraisers such as the Breakfast at Tiffanys Gala on March 2. Besides three full-time staff members and four part-time workers the council has more than 150 volunteer tutors and teachers and another 200 volunteers who help with fundraising special events mailings and other projects council officials say.

Were truly volunteer-driven says the nonprofits adult basic literacy director YasminTomkinson who started as a tutor herself.

She recalls a student: He was bright and hardworking. He had very very low self-esteem and low confidence and was just frustrated. Even though he knew what he wanted to do with his life he would literally say Im stupid and Im never going to get there. It took a lot of work. He made it happen.

The student eventually got a job he wanted bought a house got married and earned several promotions Tomkinson says.

Literacy skills are survival tools Tomkinson says without which people may have trouble knowing their address understanding emergency caution signs knowing which service station pump is for diesel and reading restaurant menus and medication labels.

If you dont have that knowledge or that skill or access think of how limited your world is Tomkinson says.

Literacy council partners include which offers programs covering GED prep Adult Basic Education English as a Second Language adult high school and compensatory education for adults with disabilities all free through a basic skills grant for students 16 and older.

Due to a change in ownership GED testing will soon transition from paper and pencil to computerized tests this year and next year it will be more expensive $120 rather than $35 and include more strenuous content.

This will be a big update Talbert says.

Helping Give the Gift of Literacy

Volunteer tutors must be at least 18 and have a high school diploma and they can take an orientation class and attend tutor-training workshops. Many are former teachers and retirees and some are students.

The friendships that take place are just phenomenal Yaw says.

Our job is to reach as many of those people as we can so their lives can become less of a challenge Lytvinenko says.

In a way theres not an end to this Linda Thomas says. It will carry on forever.

She moved from to about 11 years ago with her two daughters.

an accountant can read English but knowing when to practice speaking it can be challenging. She speaks Spanish at home so her daughters can learn both languages.

The literacy councils English for Speakers of Other Languages program helps her and adult students from other countries learn and practice English through classes personal tutoring computer labs and Skype.

I want to learn how to speak English with a lot of people … says Mrs. Nachanan Powell who came to from last year after getting married.

Powell who worked as a secretary in can use computers and type in English but she wants to speak the language better so she can do more here learn American customs and become more connected to other countries.

She drives from to the literacy council for English classes and practices at home reading books watching television listening to music and the news and talking to her husband.

ZeynepŌzdemir a dressmaker from is in helping care for her daughters twin babies.

I take care of my grandchildren so I learn English. I live here Ōzdemir says. I want to speak perfect English.

Locally ESOL students come from about 37 different countries and range from people who never attended school in their own country to students with advanced degrees who can read and write but need help speaking and understanding various dialects and idioms.

Its a very complex skill to be able to speak fluently in another language and get your points across ESOL Director Barbara Biba says. You have so many different domains you use your language on.