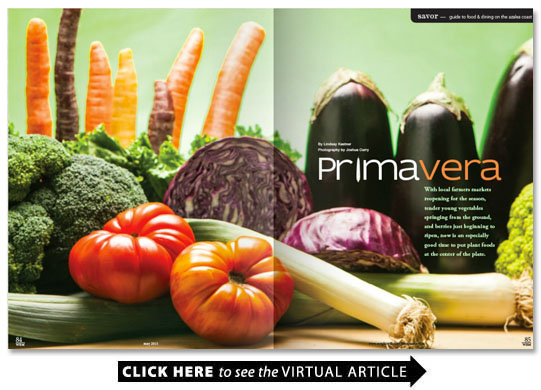 With local farmers markets reopening for the season tender young vegetables springing from the ground and berries just beginning to ripen now is an especially good time to put plant foods at the center of the plate.

Home cooks can find plenty of seasonal produce to play around with this time of year and many restaurants design menu specials using spring-harvested crops.

Between fresh-caught seafood and porky Southern classics eateries in the Port City aren’t especially known for catering to vegetarian tastes but plenty of places are happy to make accommodations.

That is the perception they have of French food he says.

But dishes built around seasonal produce have their place on the menu as well.

“We always have something for the vegetarians ” says Moity who notes he and his wife co-owner Patricia aren’t big meat eaters themselves.

“At home I’m not the typical French guy ” Moity says. “I barely drink red wine and I don’t eat much meat.”

This time of year he starts transitioning his menu from heavier winter dishes inspired by the North of France to their more Mediterranean cousins.

“It’s not a drastic change ” Moity says. “It’s more of an evolution.”

Not far away The George on the Riverwalk has made some menu changes of its own. The restaurant recently rolled out a vegan/gluten-free menu in addition to its regular fare.

The new menu prompted by the dietary habits of owner George Coffin has met with a good reception from customers says general manager Julie McDonald.

Americans eat more meat per person than almost any nation on Earth. But while only a small fraction of Americans are vegetarian plenty of people are cutting back on the amount of meat they consume.

A 2012 NPR-Truven Health Analytics poll of 3 000 adults found nearly 40 percent said they were eating less meat than they did three years earlier.

The George has seen this trend first hand with some customers who say their diets are neither exclusively vegan nor gluten-free choosing nonetheless to try the new menu items.

The George’s executive chef Larry Fuller  — a self-professed steak lover  — worked with a consultant to design the supplementary menu. It debuted during fall 2014.

“I never actually cooked tofu before that ” Fuller says. “It’s not bad.”

These days Fuller finds himself making vegan tacos stuffed eggplant and an occasional special of zucchini boats filled with walnuts and apples.

“It’s so good ” he says. “I’m telling you you would not think that it’s just vegetable items.”

For the home cook wanting to incorporate more seasonal produce into his or her diet Moity’s recommendation is a simple one:

“Go to the farmers market of course ” he says. “There it is everything you need. It’s great.”

The Wilmington area has a bevy of seasonal farmers markets getting underway now.

The Wednesday market at Poplar Grove Plantation and the Saturday market along Wilmington’s downtown riverfront both opened in April for the 2015 season. The Carolina Beach market opens Saturday May 16 while the Wrightsville Beach market begins its season Monday May 18.

Both he and Fuller say eggplant is a favorite choice for vegetarian dishes.

To combat any bitterness Moity suggests rubbing the cut insides of an eggplant with salt and sugar and leaving it to sweat for a while.

“If you want to spend a little bit more money you can get a Japanese eggplant ” Moity says which are regarded by many as better due to less bitterness and a thinner skin.

“In general ” Moity says “if you have a zucchini or other vegetable that is very large that is not as good.”

Along those same lines Fuller favors neither pencil-thin asparagus nor extra-thick specimens.

Max Sussman co-owner with his wife April of The Veggie Wagon in Carolina Beach sells farm-fresh produce to shoppers who visit his retail location or sign up for home delivery. Sussman recommends keeping three things in mind when selecting fruits and vegetables.

The fresher the produce is upon purchase the longer it will keep once at home.

Properly stored spring greens such as arugula will keep for seven to ten days Sussman says.

“You don’t want to freeze them but you want them as cold as possible ” he says. “So that 34-35 degree temperature is great.”

Root vegetables can last much longer Sussman says as long as they are kept refrigerated.

Some vegetables like tomatoes are better at room temperature.

To store spring produce Fuller suggests taking a cue from the pros.

“If you go in the grocery store and they don’t have it in the refrigerators don’t go and stick it in one at home ” he says.

Sussman prefers simple preparations that make the most of produce at its peak such as salads of strawberries cucumbers and mint or pasta with wilted arugula. He roasts spring root vegetables with balsamic vinegar olive oil and fresh thyme then tosses them with a tablespoon of brown sugar for the final few minutes of cooking.

“We’re big fans of letting the raw ingredients do a lot of the speaking ” he says. “When you get local produce that’s fresh it’s mind blowing. It’s delicious.”

During the spring season this carrot flan is offered as an occasional special at Caprice Bistro. Chef Thierry Moity says the same concept can be applied to many different spring vegetables.

Preparation: Preheat the oven to 350 degrees. Heat a pot of water on the stovetop to a rolling boil. Plunge the carrots into boiling water until completely cooked. Drain the carrots. Puree in a blender until smooth. Add eggs cream salt and pepper and whir to combine. Divide the mixture into four ramekins; place them in a baking dish filled halfway with hot water. Bake for 25 minutes. Let the flans rest for about 15 minutes before inverting the ramekins to unmold them. Serve hot or cold with a simple lemon parsley and olive oil vinaigrette.

Black Bean Cakes Recipe courtesy of The George on the Riverwalk

This recipe makes enough to feed a crowd but can be scaled down for a smaller batch. At The George the cakes are served topped with spicy ketchup and crispy cornmeal-coated baked onions.

cornmeal as needed to thicken

Preparation: Drain and rinse beans well. Saut? the peppers and onion until soft. Add the garlic and cook for two more minutes. Add the blackened seasoning and cook one minute more. Remove pepper and onion mix from the pan and cool. Put three-fourths of the black beans in a bowl and smash them with gloved hands. Add the pepper and onion mix and remaining beans; mix well and thicken with cornmeal as needed to achieve a mixture that holds together. Shape into patties and saut? in olive oil.

Shave each zucchini into ribbon slices from top to bottom. Once you have shaved all 2 pounds of zucchini place the ribbons in a large bowl. Add basil and oregano then toss to combine. Heat a nonstick skillet on the stovetop until extremely hot then turn down to medium heat. Add the pecans to toast. Toast shelled chopped pecans for 5-10 minutes stirring occasionally with a wooden spoon or spatula. Add pecans to the zucchini. Pour the dressing over top and toss. Sprinkle parmesan cheese on top of salad before serving.