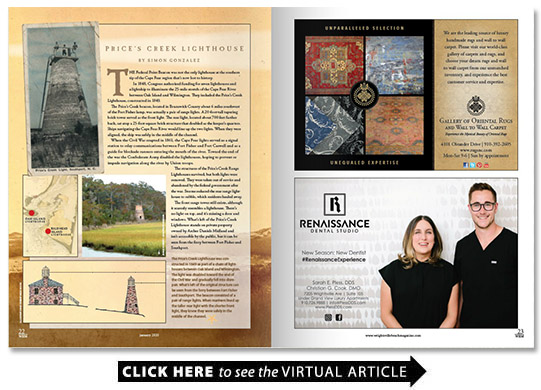 The Federal Point Beacon was not the only lighthouse at the southern tip of the Cape Fear region that’s now lost to history.

In 1848 Congress authorized funding for seven lighthouses and a lightship to illuminate the 25-mile stretch of the Cape Fear River between Oak Island and Wilmington.They included the Price’s Creek Lighthouse constructed in 1849.

The Price’s Creek beacon located in Brunswick County about 6 miles southwest of the Fort Fisher lamp was actually a pair of range lights. A 20-foot-tall tapering brick tower served as the front light. The rear light located about 700 feet farther back sat atop a 25-foot-square brick structure that doubled as the keeper’s quarters. Ships navigating the Cape Fear River would line up the two lights.When they were aligned the ship was safely in the middle of the channel.

When the Civil War erupted in 1861 the Cape Fear lights served as a signal station to relay communications between Fort Fisher and Fort Caswell and as a guide for blockade runners entering the mouth of the river. Toward the end of the war the Confederate Army disabled the lighthouses hoping to prevent or impede navigation along the river by Union troops.

The structures of the Price’s Creek Range Lighthouses survived but both lights were removed. They were taken out of service and abandoned by the federal government after the war. Storms reduced the rear range lighthouse to rubble which residents hauled away.

The front range tower still exists although it scarcely resembles a lighthouse. There’s no light on top and it’s missing a door and windows. What’s left of the Price’s Creek Lighthouse stands on private property owned by Archer Daniels Midland and isn’t accessible by the public but it can be seen from the ferry between Fort Fisher and Southport.