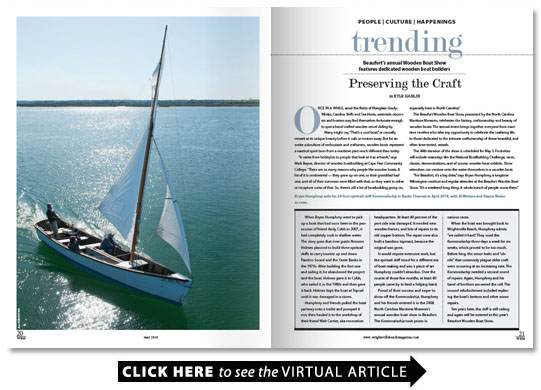 Once in a while amid the fleets of fiberglass Grady-Whites Carolina Skiffs and Sea Hunts waterside observers and boaters may find themselves fortunate enough to spot a hand-crafted wooden vessel sliding by.

Many might say “That’s a cool boat ” or casually remark at its unique beauty before it sails or motors away. But for an entire subculture of enthusiasts and craftsmen wooden boats represent a nautical spirit born from a maritime past much different than today.

“It varies from hobbyists to people that look at it as artwork ” says Mark Bayne director of wooden boatbuilding at Cape Fear Community College. “There are so many reasons why people like wooden boats. A lot of it is sentimental — they grew up on one or their granddad had one and all of their summers were filled with that so they want to relive or recapture some of that. So there’s still a lot of boatbuilding going on especially here in North Carolina.”

The Beaufort Wooden Boat Show presented by the North Carolina Maritime Museum celebrates the history craftsmanship and beauty of wooden boats. The annual event brings together everyone from maritime revelers who take any opportunity to celebrate the seafaring life to those dedicated to the intricate craftsmanship of these beautiful and often time-tested vessels.

The 44th iteration of the show is scheduled for May 5. Festivities will include mainstays like the National BoatBuilding Challenge races classes demonstrations and of course wooden boat exhibits. Show attendees can venture onto the water themselves in a wooden boat.

“For Beaufort it’s a big draw ” says Bryan Humphrey a longtime Wilmington resident and regular attendee at the Beaufort Wooden Boat Show. “It’s a weekend-long thing. A whole bunch of people come there.”

A CRAFT PASSED THROUGH GENERATIONS

When Bryan Humphrey went to pick up a boat that had once been in the possession of friend Andy Cobb in 2007 it had completely sunk in shallow water. The story goes that river guide Neusom Holmes planned to build three spritsail skiffs to carry tourists up and down Pamlico Sound and the Outer Banks in the 1970s. After building the first one and sailing it he abandoned the project and the boat. Holmes gave it to Cobb who sailed it in the 1980s and then gave it back. Holmes kept the boat at Topsail until it was damaged in a storm.

Humphrey and friends pulled the boat partway onto a trailer and pumped it out then hauled it to the workshop of their friend Walt Cartier aka renovation headquarters. At least 40 percent of the port side was damaged. It needed new wooden frames and lots of repairs to its old copper bottom. The repair crew also built a bamboo topmast because the original was gone.

It would require extensive work but the spritsail skiff stood for a different era of boat making and was a piece of art Humphrey couldn’t abandon. Over the course of those few months at least 40 people came by to lend a helping hand.

Proud of their success and eager to show off the Kommradeship Humphrey and his friends entered it in the 2008 North Carolina Maritime Museum’s annual wooden boat show in Beaufort. The Kommradeship took prizes in various races.

When the boat was brought back to Wrightsville Beach Humphrey admits “we sailed it hard.” They used the Kommradeship three days a week for six weeks which proved to be too much. Before long the minor leaks and “uh-ohs” that commonly plague older craft were occurring at an increasing rate. The Kommradeship needed a second round of repairs. Again Humphrey and his band of brothers answered the call. The second refurbishment included replacing the boat’s bottom and other minor repairs.

Ten years later the skiff is still sailing and again will be entered at this year’s Beaufort Wooden Boat Show.

Some of the people are graduates of CFCC’s wooden boatbuilding program the only one of its kind in the Southeast.

It provides instruction to anywhere from 10-18 students each school year.

After graduating he worked for various people around the Southeast before beginning his own business as a full-time wooden boat builder. Five years ago he closed his shop and returned to his alma mater to teach his trade.

“A lot of it is passing on knowledge ” Bayne says. “I’m hoping I can turn out students who I would want to hire. I think about it as a boat builder. You want them to have the basics to get started. It’s not like when they leave here they’re a first-class shipwright. You’re not there yet you just have a really good foundation.”

For Chris Sargent the prospect of learning wooden boatbuilding carried with it endless possibilities. That’s what led the Navy veteran to enroll in CFCC’s wooden boat program after relocating from Charlotte.

“I saw that there was a wooden boatbuilding program and I said ‘If I can build a boat out of wood then I can build anything with all of the bending wood and shaping it and everything ‘” Sargent says.

Sargent and his partner won the National Boatbuilding Challenge at the 2015 Beaufort show. He returned as the defending champion with a different partner in 2016.

“You get three sheets of 3/8-inch plywood a bunch of random sticks of lumber either pine or cypress and the transom — the back of the boat — because it’s too wide so they already have two pieces glued together ” Sargent says. “There is a four-hour time limit they blow a whistle and everybody just starts cutting plywood. It’s judged on how long it took you to build it. Then there’s a race. You have to race these boats at the end.”

As a regular attendee at the show and a wooden boat restoration hobbyist himself Humphrey has witnessed many of the annual boatbuilding competitions though he opts not to join the frantic scene of teams hurrying to build a water-worthy vessel.

“It’s fun to watch because there are people that try to do it only with hand tools ” Humphrey says. “It’s like a zoo in there. There are 30 different routers going at the same time and then they put them in the water and try to race out and back and that’s pretty comic.”

BORN FROM A CONVERSATION

The Beaufort Wooden Boat Show started in 1975 after friends Charles McNeil and Michael Alford decided to hold a community event to celebrate their passion for traditional wooden boats. Beaufort’s downtown was in transition from working waterfront to the tourist haven of the more-recent past so the first two shows took place in nearby Morehead City.

Bayne has attended the show off and on for the past 30 years. The show presents awards in 13 categories including People’s Choice Best Sail Captain’s Choice and Best in Show.

“The Beaufort show has a large amount of boats around 60 boats on average every year ” Bayne says. “They fill up the street area and the dock space there. You see all types and all sizes.”

For enthusiasts of the wooden boat culture and avid boat racers like Humphrey the annual show is as much an opportunity to enjoy his own boats as it is to admire and appreciate the others.

“Sometimes we don’t pay much attention to the show we just put the boats in the water and race ” Humphrey says. “There are six races on Saturday and then a big around-the-island race on Sunday. We anchor across the creek and go back and forth in one boat and just hang out there the whole time. The times that we’ve brought 10 or 12 people or met people that we know up there have been really fun.”