BY Lauren Sears and Melissa Sutton-Seng 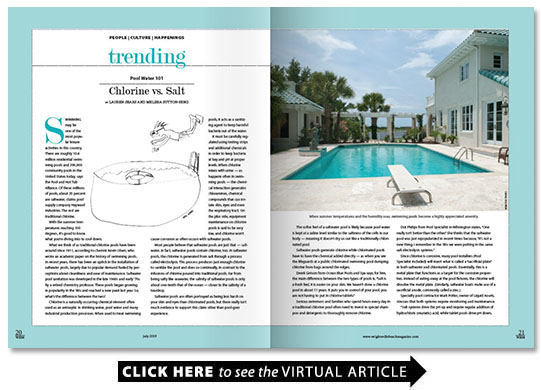 Swimming may be one of the most popular leisure activities in this country. There are roughly 10.4 million residential swimming pools and 390 000 community pools in the United States today says the Pool and Hot Tub Alliance. Of these millions of pools about 35 percent are saltwater claims pool supply company Hayward Industries. The rest are traditional chlorine.

With the summer temperatures reaching 100 degrees it’s good to know what you’re diving into to cool down.

What we think of as traditional chlorine pools have been around since 1911 according to chemist Kevin Olsen who wrote an academic paper on the history of swimming pools. In recent years there has been an uptick in the installation of saltwater pools largely due to popular demand fueled by perceptions about cleanliness and ease of maintenance. Saltwater pool sanitation was developed in the late 1960s and early ’70s by a retired chemistry professor. These pools began growing in popularity in the ’80s and reached a new peak last year. So what’s the difference between the two?

Chlorine is a naturally occurring chemical element often used as an antiseptic in drinking water pool water and many industrial production processes. When used to treat swimming pools it acts as a sanitizing agent to keep harmful bacteria out of the water.

It must be carefully regulated using testing strips and additional chemicals in order to keep bacteria at bay and pH at proper levels. When chlorine mixes with urine — as happens often in swimming pools — the chemical interaction generates chloramines chemical compounds that can irritate skin eyes and even the respiratory tract. On the plus side equipment maintenance on chlorine pools is said to be very low and chlorine won’t cause corrosion as often occurs with saltwater pools.

Saltwater pools are often portrayed as being less harsh on your skin and eyes than chlorinated pools but there really isn’t much evidence to support this claim other than pool-goer experience.

The softer feel of a saltwater pool is likely because pool water is kept at a saline level similar to the saltiness of the cells in our body — meaning it doesn’t dry us out like a traditionally chlorinated pool.

Saltwater pools generate chlorine while chlorinated pools have to have the chemical added directly — as when you see the lifeguards at a public chlorinated swimming pool dumping chlorine from bags around the edges.

Derek Getson from Ocean Blue Pools and Spa says for him the main difference between the two types of pools is “Salt is a fresh feel it is easier on your skin. We haven’t done a chlorine pool in about 11 years. It puts you in control of your pool you are not having to put in chlorine tablets.”

Serious swimmers and families who spend hours every day in a traditional chlorine pool often need to invest in special shampoo and detergents to thoroughly remove chlorine.

Dot Philips from Pool Specialist in Wilmington states “One really isn’t better than the other.” She thinks that the saltwater pool was just repopularized in recent times because “It’s not a new thing; I remember in the ’80s we were putting in the same salt electrolysis systems.”

Since chlorine is corrosive many pool installers (Pool Specialist included) will insert what is called a “sacrificial plate” in both saltwater and chlorinated pools. Essentially this is a metal plate that functions as a target for the corrosive properties. Instead of eating away at the pool fixtures the chlorine will dissolve the metal plate. (Similarly saltwater boats make use of a sacrificial anode commonly called a zinc.)

“Salt systems drive the pH up and require regular addition of hydrochloric (muriatic) acid while tablet pools drive pH down requiring the addition of soda ash to raise it. All of the chemical parameters need to be followed in both types (pH chlorine alkalinity cyanuric acid calcium TDS) with the addition ofsalt concentrations and anode maintenance in a salt pool ” he says.

Potter sees issues with adding a saltwater system to a non-saltwater pool.

“The most prolific destroyer of pools is the addition of a salt system when the pool wasn’t built to handle it ” he says.”That includes the halo effect which is when the salt penetrates the deck and leaves a cloudy ring around the pool especially at exits.”

As far as upkeep goes both traditional chlorine and saltwater pools have their pros and cons. Maintenance for chlorine pools is more hands-on but the up-front cost is lower while the chlorine generator required for saltwater pools raises initial costs but can make ongoing pool care simpler.

Experts differ on whether one kind of pool is more cost-effective than the other over the long term so homeowners should evaluate the decision on factors like the type of maintenance activities involved and other lifestyle considerations.

So is one really better than the other? You decide. Either way when you’re cannonballing into the nearest pool now you know the difference.