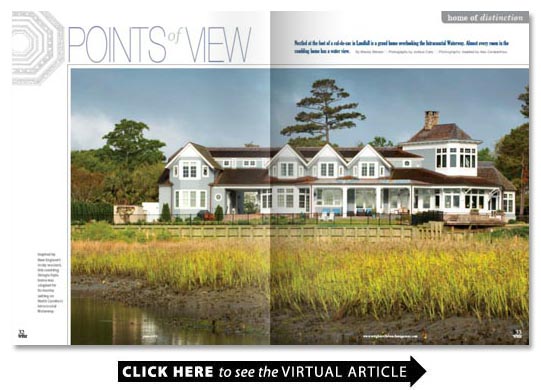 Nestled at the foot of a cul-de-sac in Landfall is a grand home overlooking the Intracoastal Waterway. Almost every room in the rambling home has a water view.

Michael Kersting worked with homeowners Art and Sherri Drogue to make the best use of an unusual lot and take advantage of the land and seascape.

Quite frankly every cul-de-sac lot is a challenge and this was an extra challenge due to the waterfront and the setbacks he says.

Sherri Drogue says taking their time during the planning stage worked to their advantage.

The county made an adjustment which allowed us to shift the house. But the trade off was that we had to control the runoff so we built rain gardens she says.

The limitations of where they could develop the site led them to settle on a combination of styles.

It allowed us to do a kind of rambling structure Kersting says. In the end he was able to open every view while achieving virtual privacy from the neighbors.

Architect Mark Wilson worked as the project manager. The success of the finished house is heavily influenced by Wilsons attention to complicated construction details in the plans and the day-to-day interactions with both the contractor and the client during construction.

The finished product was the dream home for the Drogues who relocated to Wilmington North Carolina from New York seeking warmer weather and golf courses. Art Drogue retired from Unilever the consumer products giant. Sherri Drogue is an interior designer.

Fronting the house is a pergola with a folly a whimsical building handed down from Victorian times. The folly introduces a recurring design motif the octagon.

We started playing with that shape and it became somewhat of a theme Kersting says.

The shape is prominent throughout the architectural elements of the house both on the exterior and the interior.

I love the octagons. They are a little more challenging to decorate but they add character Sherri Drogue says.

Crossing the threshold the visitor is struck by the staircase as well as the water views. Even the entrance was designed with the view in mind.

From the front door Sherri wanted to see the water Kersting says.

They talked about many options settling on a unique staircase affording a view of the water while making a grand statement. Kersting says the staircase itself is a work of art.

Fran Colangelo [King Post Design & Construction] leads an incredibly talented group of craftsmen who confidently pieced together every component of this geometrically difficult house he says. Every detail on and in the Drogue house was crafted with elegance and versatility.

From the foyer the house unfolds to showcase even more of the water view. Of the open floorplan Kersting says A traditional home is more room-based. This house has a modern way of open living.

A seating area to the left sets the stage for the color scheme; the interior of the home is dominated by shades of blue.

Its a cool palette. Im a blue girl. I decided to use it throughout the house. Its very serene for me Drogue says.

Im a believer in doing ceilings Drogue says. She is also fond of fixtures and the use of lamps to light her rooms.

The open kitchen features a seating area around a large chestnut table sited for water views. Even the kitchen sink has a stunning view of the water not only from the window over the sink but also from the glass-fronted cabinets hanging over exterior windows.

Leading into the master is a library room marked by lots of details on the cabinetry. The master bedroom has an exquisite view of the water.

The master bath also octagonal features a soft palette with daylight pouring through the windows. The floors are marble and the countertops are crema marfil. Transoms also allow daylight to pour into the walk-in closets.

The Drogues designed the house with their four children in mind hoping for many visits with the grandchildren in tow. A bunkroom includes eight beds for the kids.

A room designed as Sherris Bluebird Hill Interiors design office doubles as a playroom for the children.

Outside a breezeway leads to the backyard. Walking across the lawn the view comes to life. Egrets and other birds congregate in the marsh as well as in the nearby pond to the left of the house.

The back porch offers a secluded retreat overlooking the pool. The design allows almost total privacy.

You literally cannot see any other house in Landfall Kersting says.