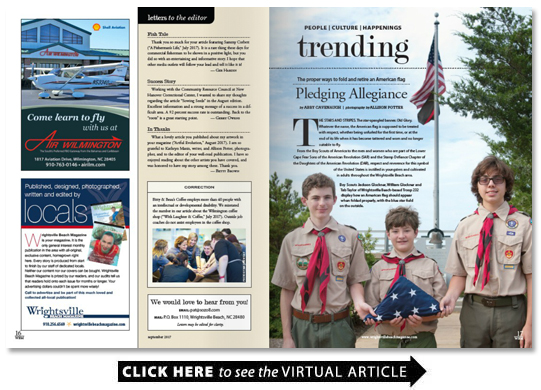 The stars and stripes. The star-spangled banner. Old Glory. Whatever the name the American flag is supposed to be treated with respect whether being unfurled for the first time or at the end of its life when it has become tattered and worn and no longer suitable to fly.

All Cub Scouts and Boy Scouts are taught how to properly fold the American flag says Tab Taylor a Scout in troop No. 232 and Wrightsville Beach resident.

“We learn about how it shouldn’t touch the ground ” he explains. “We fold it lengthwise until it’s folded in a triangular shape and then tuck whatever’s left into a triangle.”

The triangular shape is the proper way to fold the flag in all circumstances from the daily lowering at sundown to solemn formal ceremonies at funerals. Once folded the flag can be stored in a box displayed in a special case or at military funerals presented to the deceased’s widow or other family members.

What may come as a surprise is that there is no standardized law for the flag-folding ceremony nor a meaning for each fold of the flag says Col. Gary O. Green secretary of the North Carolina SAR. The United States military the National Flag Foundation the Boy Scouts and the American Legion all ascribe different symbolic meanings for the steps involved.

For a flag retirement ceremony at Oakdale Cemetery in June the SAR followed the American Legion’s flag-folding script which “represents the same religious principles on which our great country was originally founded ” the organization states.

In the American Legion’s version the symbols for each fold of the flag are as follows (paraphrased):

1. The first fold signifies a symbol of life.

3. The third fold honors and remembers a veteran who gave a portion of his or her life in defense of the United States.

4. The fourth fold represents belief in God trusting in Him in times of war and peace for divine guidance.

5. The fifth fold is a tribute to the United States of America and includes a quote from 19th-century Naval hero Stephen Decatur: “Our country in dealing with other countries may she always be right but it is still our country right or wrong.”

6. The sixth fold symbolizes where our hearts lie as Americans. It emphasizes that the Pledge of Allegiance is recited with hands over hearts and that we pledge allegiance to the republic for which the flag stands.

7. The seventh fold honors the country’s armed forces both those stationed at home and abroad in defense of our nation.

8. The eighth fold honors mothers for whom it flies on Mother’s Day.

9. The ninth fold is a tribute to womanhood the American Legion script reads “for it has been through their faith love loyalty and devotion that the character of men and women who have made this country great have been molded.”

10. The 10th fold is a tribute to fathers as they too have given sons and daughters for the defense of our country.

11. The 11th fold represents the lower portion of the seal of King David and King Solomon and glorifies in the eyes of Hebrew citizens the God of Abraham Isaac and Jacob.

12. Finally the 12th fold through the eyes of the Christian citizen represents God the Father the Son and the Holy Ghost.

Once the flag is completely folded into its triangular shape the stars are on display reminding us that it’s “In God We Trust.” The shape also has the appearance of a tricorn hat which represents the soldiers who served under General George Washington and sailors and Marines who served under Captain John Paul Jones.

In another version of a flag-folding ceremony the first fold represents the 13 original states — Delaware Pennsylvania New Jersey Georgia Connecticut Massachusetts Maryland South Carolina New Hampshire Virginia New York North Carolina and Rhode Island — and the second fold represents the 50 states. All other folds represent famous quotes including “Give me liberty or give me death” by Patrick Henry and ending with Dr. Martin Luther King Jr.’s “I have a dream that my four little children will one day live in a country in which they are judged not by the color of their skin but by the content of their character.”

In the Boy Scouts of America version the first fold also represents the 13 original colonies. Subsequent folds honor wars that America has participated in from the War of Independence to Vietnam. The other folds represent the Commander in Chief previous Boy Scouts God armed forces and lastly freedom.

There comes a time in each American flag’s life when it may become tattered and no longer suitable for service.

For a Flag Day ceremony in June held at Oakdale Cemetery near downtown Wilmington Taylor’s Boy Scouts troop and the SAR and DAR local chapters participated in a flag-retirement ceremony.

“Once they’ve become tattered they need to be disposed of properly ” says Eric Kozen Oakdale Cemetery superintendent. “It’s all a part of flag etiquette.”

The Boy Scouts DAR and SAR retired more than 100 flags during the ceremony. The flags were cut into strips separating the stars from the stripes. Then those strips were placed in a barrel to be burned. Once cooled the ashes of the retired flags were scattered around the base of the flagpole in the cemetery.

Taylor recently completed an Eagle Scout project to modify this last step of the flag-retirement ceremony. Now the ashes will be gathered and placed inside a wooden casket that he constructed and placed in Oakdale Cemetery.

“I hope this casket will be used for many years to come ” the recent Noble Middle School graduate says. “I will personally maintain it for as long as I can.”

The Flag Day ceremony is something organizers hope will become an annual event.

“This is a very patriotic service that we should all be in attendance for ” Kozen says. “We always want something nice gracing our homes but when it becomes tired it’s time for it to be retired respectfully and with honor.”