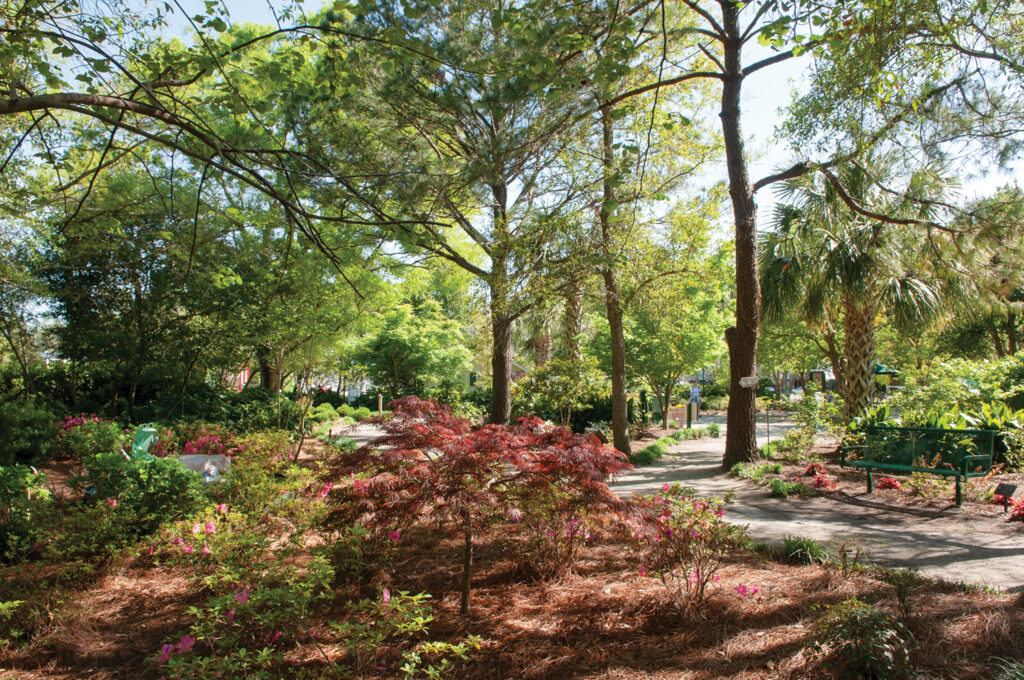 As spring blooms in gardens all over the nation, one storied local garden club is celebrating its 70th anniversary.

The Harbor Island Garden Club was established in 1952 when 10 women met for lunch wearing white hats and gloves.

Over the succeeding decades the women of Wrightsville Beach and Harbor Island bonded in a club that holds a long tradition of service to the community. Members donate their time, skills and labor in order to beautify the community in a significant way.

The club is a not-for-profit federated club of the National Garden Club, Inc., and composed of women who live east of the drawbridge.

“My mother was not a gardener and I learned how to garden in this club,” says Elise Running, who joined in 1989.

She is in charge of the club’s Harbor Way Gardens, at the apex of the town municipal complex where U.S. Hwy 74 and 76 merge near the drawbridge.

“When I got into the club, we had not lived on this beach more than a couple of years,” she says. “The club is how I got all my friends. Now, 70 years later we’re still here, and we still have women who want to be in this club.”

Membership is limited to 45. Other than a vacancy created by someone moving or passing away, there is only one opportunity for new members to join. Members attain honorary status after 25 years, opening a slot for new active members.

The club is multigenerational.

“We have a lot of mothers and daughters in the club,” Running says, listing Jeanette Golder, her daughter Beth Golder, and her daughter Ann as examples.

“She gets out here and splits the plants and hauls away the weeds,” Gilbert says of Dagny.

For Betty, being in the club was also about the friendships she formed with her fellow club members and neighbors.

“We have good strong friends,” she says.

Betty, now in a wheelchair from a stroke, enjoyed sitting in the sun in the Harbor Way Gardens during the Cape Fear Garden Club Garden Tour during the Azalea Festival in 2022. While Kim was stationed nearby to answer questions, Dagny ran to greet tour visitors.

Betty was very active in the club when Gilbert and her sister were growing up. She fondly remembers the Rooty Rascals, the club’s educational program for Wrightsville Beach Elementary fifth-graders, begun by member Sandy Overbeck in 1984.

“She was the secretary; she was the treasurer. It’s a lot of fun to get her out here,” Gilbert says.

Gilbert went away to college, returning and joining the club in 2004 after her mother became inactive.

“I did get from her my love of horticulture,” she says.

Brenda Olsen, a 12-year member, says one of her favorite things about the club is “that it is not political.”

As president for the past two years, Gresham shepherded the club through trying times. The club meets monthly for nine months out of the year. Determined to respond to the challenges of a pandemic while “moving the group forward,” Gresham’s innovative approach had members meeting outside in the Harbor Way Gardens.

“I am so passionate about these women and this garden,” Gresham says while standing in the Harbor Way Gardens in April 2022.

As she looks around the garden, she notes the installation of a new fountain as well as the eight new live oaks planted on the garden’s perimeter.

“I am conscious that everything we plant in the garden will thrive here on this beach,” Gresham says.

The HIGC holds fundraising events each year. Mother’s Day weekend includes a plein air Paint Out organized by Star Sosa: artists paint all over the beach then come together in the Harbor Way Gardens to sell their art accompanied by a two-day fundraising plant sale. They have a craft sale booth at the NC Holiday Flotilla Festival in the Park in November. Garden bricks and pavers (which can be personalized) are also available for purchase. At Christmastime the club hosts a fundraising luncheon, which in 2021 raised $18,000 to spend on projects to beautify the community. Harbor Way Gardens was included in the last two Azalea Festival’s Cape Fear Garden Club tour.