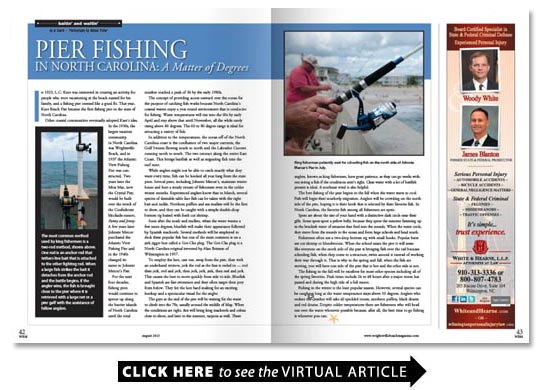 In 1923 L.C. Kure was interested in creating an activity for people who were vacationing at the beach named for his family and a fishing pier seemed like a good fit. That year Kure Beach Pier became the first fishing pier in the state of North Carolina.

Other coastal communities eventually adopted Kures idea. In the 1930s the largest vacation community in North Carolina was Wrightsville Beach and in 1937 the Atlantic View Fishing Pier was constructed. Two years later the Mira Mar now the Crystal Pier would be built over the wreck of the Confederate blockade-runner Fanny and Jenny.  A few years later Johnnie Mercer purchased the Atlantic View Fishing Pier and in the 1940s changed its name to Johnnie Mercers Pier.

For the next four decades fishing piers would continue to sprout up along the barrier islands of North Carolina until the total number reached a peak of 36 by the early 1980s.

The concept of providing access seaward over the ocean for the purpose of catching fish works because North Carolinas coastal waters enjoy a year round environment that is conducive for fishing. Water temperatures will rise into the 60s by early April and stay above that until November all the while rarely rising above 80 degrees. The 60 to 80 degree range is ideal for attracting a variety of fish.

In addition to the temperatures the ocean off of the North Carolina coast is the confluence of two major currents the Gulf Stream flowing south to north and the Labrador Current running north to south. The two interact along the entire East Coast. This brings baitfish as well as migrating fish into the surf zone.

While anglers might not be able to catch exactly what they want every time fish can be hooked all year long from the state piers. Several piers including Johnnie Mercers maintain winter hours and host a steady stream of fishermen even in the colder winter months. Experienced anglers know that in March several species of desirable table fare fish can be taken with the right bait and tackle. Northern puffers and sea mullets will be the first to show and they can be caught with a simple double-drop bottom rig baited with fresh cut shrimp.

Soon after the toads and mullets when the water warms a few more degrees bluefish will make their appearance followed by Spanish mackerels. Several methods will be employed to deck these popular fish but one of the most common is on a jerk jigger lure called a Got-Cha plug. The Got-Cha plug is a North Carolina original invented by Alan Brinson of Wilmington in 1957.

To employ the lure cast out away from the pier then with an underhand retrieve jerk the rod as the line is reeled in reel then jerk reel and jerk then jerk jerk jerk  then reel and jerk. This causes the lure to move quickly from side to side. Bluefish and Spanish are fast swimmers and they often target their prey from below. They hit the lure hard making for an exciting hookup and a spectacular visual for the angler.

The most common method used by king fishermen is a two-rod method. One rod is an anchor rod that tethers live bait that is attached to the other fighting rod. When a large fish strikes the bait it detaches from the anchor rod and the battle begins. If the angler wins the fish is brought close to the pier where it is retrieved with a large net or a pier gaff with the assistance of fellow anglers.

The guys at the end of the pier will be waiting for the water to climb into the 70s usually around the middle of May. When the conditions are right this will bring king mackerels and cobias close to shore and later in the summer tarpons as well. These anglers known as king fishermen have great patience as they can go weeks without seeing a fish if the conditions arent right. Clear water with a lot of baitfish present is ideal. A southeast wind is also helpful.

The best fishing of the year begins in the fall when the water starts to cool. Fish will begin their southerly migration. Anglers will be crowding on the north side of the pier hoping it is their hook that is selected by their favorite fish. In North Carolina the favorite fish among all fishermen are spots.

Spots are about the size of your hand with a distinctive dark circle near their gills. Some spots sport a yellow belly because they spent the summer fattening up in the brackish water of estuaries that feed into the sounds. When the water cools they move from the sounds to the ocean and form large schools and head south.

Fishermen often use a two-drop bottom rig with small hooks. Popular baits are cut shrimp or bloodworms. When the school nears the pier it will seem like everyone on the north side of the pier is bringing fish over the rail because schooling fish when they come to a structure swim around it instead of working their way through it. That is why in the spring and fall when the fish are moving you will have one side of the pier that is hot and the other side is not.

The fishing in the fall will be excellent for most other species including all of the spring favorites. Peak times include 24 to 48 hours after a major storm has passed and during the high tide of a full moon.

Fishing in the winter is the least popular season. However several species can be caught as long as the water temperature stays above 50 degrees. Anglers who endure the weather will take all speckled trouts northern puffers black drums and red drums. Despite colder temperatures there are fishermen who will head out over the water whenever possible because after all the best time to go fishing is whenever you can.