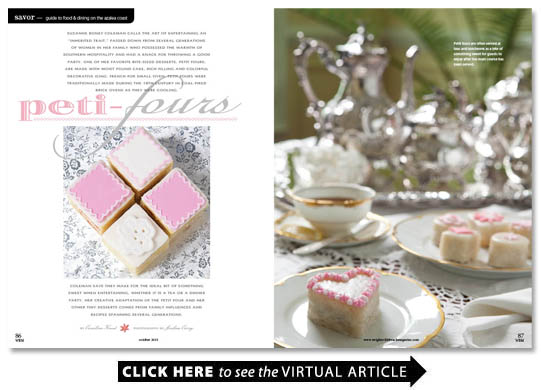 Suzanne Boney Coleman calls the art of entertaining an inherited trait passed down from several generations of women in her family who possessed the warmth of Southern hospitality and had a knack for throwing a good party. One of her favorite bite-sized desserts petit fours are made with moist pound cake rich filling and colorful decorative icing. French for small oven petit fours were traditionally made during the 18th century in coal-fired brick ovens as they were cooling.

Coleman says they make for the ideal bit of something sweet when entertaining whether it is a tea or a dinner party. her creative adaptation of the petit four and her other tiny desserts comes from family influences and recipes spanning several generations.

With her mother Betty Boney Coleman talks about memories of gathering with family and friends over coffee and bite-sized desserts.

They both recall Laurie Wyly Holland Boneys mother and Colemans grandmother and wife of a Marietta Georgia Presbyterian minister as a woman who loved to serve coffee and small cookies or cakes to the constant stream of church members who came through her door during the 1960s and 70s.

Mother entertained for the church frequently Boney says. She had teas she had dinner parties; she had everything.

I think thats a Boney thing her mother laughs.

Hollands flair for entertaining meant she knew that bite-sized appetizers and desserts made guests feel they could eat and talk while moving around the room easily.

I think people like small things they dont want tremendous things. Theyre too awkward to handle Betty Boney says. So you want something bite-size so you can talk and enjoy at the same time.

Coleman has taken after her grandmother adapting her half-pound cake recipe into the petit fours and small cakes she makes for weddings Valentines Day and birthday parties.

The idea for Colemans heart-shaped petit fours comes from a metal heart-shaped mold she inherited from her husbands grandmother Martha Cook Coleman Anderson known to the family as Bubba. Anderson was a Greensboro caterer who also loved to cook and entertain people in her home. When Anderson passed away about 15 years ago Coleman inherited sheet pans cake pans and molds from her catering business. Thats when Colemans creativity with bite-sized desserts took off.

Echols started baking as a hobby after she graduated from Meredith College in 2006 and heard about Colemans cake business while enrolled at Le Cordon Bleu College of Culinary Arts in Orlando Florida. When she moved back to her native Wilmington in 2011 she met with Coleman to talk cake. The two became fast friends bonding over a mutual love for sweet treats.

Echols says her style and cake decorating techniques are constantly evolving based on current fashion and design trends.

I would say Im known for creating both traditional and modern cakes with consistent clean lines Echols says. Although I have my favorite styles of cakes I enjoy when a client challenges me with a design outside my comfort zone.

I love decorating cakes because it combines my love for details and creativity with my passion for baking and being in the kitchen Echols says.

When decorating a cake or petit four with fondant or icing Echols says restraint is key.

Cakes can easily be over-decorated and the outcome is never pretty. Sometimes less is truly more with elegant cake decorating Echols says.

How to Make Petit Fours

Suzanne Boney Coleman of Simply the Best Cakes bakes seven days a week. All of her signature pound cake flavors lemon-blueberry almond-peach and caramel have been adapted into petit fours.

Starting with a pound cake baked in a sheet pan Anna Echols suggests weighing down the cake with books or other cake pans; but Coleman freezes the cake once it comes out of the oven so that its easier to cut and less crumbly. 1. Once frozen Boney takes the cake out of the pan and then measures it with a ruler to ensure that all of the squares will be even. She says this helps her avoid trimming uneven cake layers later. 2. Coleman cuts the pound cake using a knife or cookie cutter to get the desired shape for the petit four. 3. She then slices the cake layers in half. 4. Then she spreads raspberry strawberry or chocolate filling onto the cake. Putting the cake pieces back together she then freezes the cake squares again. While the cakes are chilling she makes the sugar glaze used to coat the petit fours. 5. Once she takes the cakes out of the freezer she dips them one by one into the glaze using a slotted spoon so the excess will drip back into the bowl. 6. Once a cake has been dipped into the glaze she puts it onto a wire cooling rack so the glaze can dry and excess can drip off from the bottom. 7. Coleman pipes decorative frosting around the borders and edges of her bite-sized treats choosing colors based on the season or occasion. Though a labor-intensive task Coleman advises not to give up even when a petit four is not looking its best. 8. Coleman uses fondant icing or other decorations to add the final touches to the petit fours. 9. When entertaining Coleman often serves the petit fours on a delicate cake plate or china plate.

Sometimes I think a cake goes through stages and very often it goes through an ugly duckling stage. It looks so awful I think this cake is never going to turn out right Coleman says. Then I get inspired and start piping and it turns out beautifully.

Mrs. Harry Holland often served coffee and tea on her silver service with rosettes delicate cookies sprinkled with powdered sugar. Betty Boney and Suzanne Boney Coleman remember men from the church leaving the house with powdered sugar peppering the front of their black and navy suits.

My father my brother everybody would laugh about that Coleman says. That was my first memory of my grandmother mother and baking.

During visits with her grandmother Coleman also remembers crowding into the kitchen and eating Hollands rosettes as she dipped them into a hot frying pan and sprinkled them with powdered sugar. As a special treat Holland served the grandchildren coffee out of a delicate porcelain cup.

We thought we were having a real cup of coffee when in reality we were having some hot milk with a spoonful of coffee and lots of sugar Coleman laughs. It was a real treat and a special memory.

The grandchildren Coleman among them would also steal sugar cubes from the intricate silver bowl and pop them into their mouths like candy while the adults talked in her grandmothers living room.

Colemans love of sweets and entertaining people comes not only from her grandmother but also from her father Charles Boney now 88.

My dad has a sweet tooth also. And daddy will often want a little something sweet just a bite. So he plays into this too Coleman says.