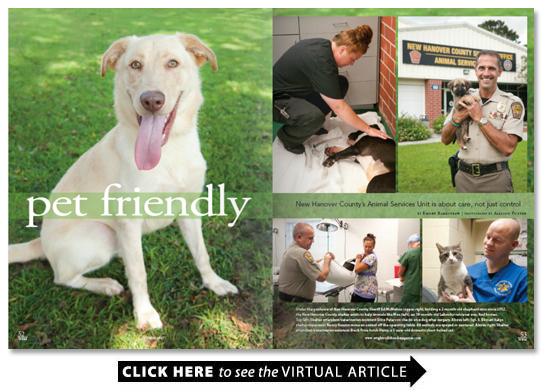 On the surface it appears typical: there is a plain brick fa�ade and a chorus of barks can be heard from outside the door. Inside two women sit behind a glass counter answering phone calls filling out paperwork and greeting everyone who enters. A woman walks to the window with a small crate containing an older cat she’s dropping off. A young couple anxiously waits to see adoptable dogs declaring they’re searching for a future “fur child.”

The building is part of New Hanover County’s Animal Services Unit a shelter at 180 Division Drive in Wilmington. The sheriff’s office took over the shelter from the health department in 2012.

Nowhere to be seen is the quintessential view of animal control — mean-faced men in starchy white shirts chasing a dog down the street netting it and tossing it in the back of a van likely to never be seen again. This negative connotation is often associated with animal control and animal services. Capt. Chuck Wilson division commander of Support Services with the New Hanover County Sheriff’s Office is aware of that.

“There is this cliche about animal shelters being like a prison and that the cold-hearted dog catcher is going to catch a poor helpless dog and they’re going to put them down ” he says. “There’s all these stereotypes. Nobody cares about animals in this community more than the staff here at this shelter.”

The busy shelter operates for the entire county population of more than 220 000. Five people work at the front desk Monday through Saturday taking registration payments and citation penalties answering around 300 phone calls and greeting 30 to 50 walk-ins each day.

The workload is heavy. Wilson says they are “overwhelmed to say the least.” Yet they belie the stereotype of uncaring bureaucrats. Like everyone who has a hand at managing the unit they convey genuine concern about what they do and are focused on the goal to care for the animals until someone comes in to take them home.

“It’s all about pets and people and the quality of life of both ” Wilson says. “It was a good organization when we took it over. We extended the hours to increase adoptions. We’ve shortened the time it takes to adopt a pet. We’ve reduced euthanasias. We have no expiration date on an adoptable pet. If it’s a good dog that can be adopted we don’t get rid of that dog.”

When the sheriff’s office took over in 2012 the main goal was to stop the spread of rabies between animals and humans. That meant getting all New Hanover County pets registered. Registrations require rabies certificates and have the bonus of identifying a missing dog if it’s brought to the shelter.

Between 2012 and 2013 there were 1 090 new registered pets. By March 1 2017 registrations were up by almost 35 000. Wilson notes that one-third of all people are pet owners and a third of that third own multiple pets. The unit uses the Chameleon database to track all registered pets and rabies certificates in the county.

Something else the sheriff’s office brought in when it took over the unit was an investigative eye. Deputies more acquainted with high-risk crimes and criminals soon found themselves focusing on calls revolving around four-legged friends.

“By tapping into that we’ve been able to increase the quality of life for pets and people as it relates to animal services ” Wilson says.

Lt. C.D. Grindstaff transferred from vice and narcotics to animal services. He works under Wilson to supervise the day-to-day operations of the unit.

“I’m a huge animal lover always been who I am so much so I’m a vegetarian ” he says. “Kids and animals they can’t tell you what’s wrong. It’s up to us to actually do our due diligence and do our investigations to bring some sort of voice to the animals.”

Grindstaff works as the “thinking cap” behind the unit. While a typical day involves emails backend databases and a mountain of paperwork he also strives to constantly come up with new ways to improve. He hopes to implement new projects like an online portal for veterinary hospitals as well as a feline area at the front of the shelter where cats can play and be socialized.

The unit is also tasked with making sure pets are safe and well cared for. That means investigating all animal-related calls.

“We receive complaints about anything from a dog being left unattended to animal cruelty to puppy mill operations ” Wilson says.

In 2012 six civilians handled all complaints. The sheriff’s office began to transition the staff to officers under the command of Sgt. Steve Blissett who transferred from the detective division.

“He’s investigated murders kidnappings some of the most serious crimes in the traditional law-enforcement sense ” Wilson says. “We wanted to focus more attention on investigative-style enforcement.”

Through attrition and an existing investigator’s completion of deputy training the unit now consists of four officers and two civilians. It’s all an effort to go beyond animal control and become animal investigators.

“Sometimes you get a call that doesn’t on its face seem to be anything more serious ” Wilson says. “Maybe it’s a dog that’s not having its cage cleaned out properly. But you go and investigate and you find out well it’s a puppy mill and now it’s a more serious offense. I want them to be investigators not just dog catchers.”

While animal control and investigations are the “boots on the ground” element of the animal unit the public-facing component is the “hearts in the shelter.” One of those belongs to Nancy Reason shelter supervisor for 22 years. She also serves on the state board that deals with shelters throughout North Carolina.

Reason has played a crucial part in the transition. She attributes the community and business relations as one of the most helpful points for the shelter’s success. One important relationship developed was between the shelter and veterinarians.

“Being a full-service shelter we’re blessed to have the relationships we do here because it’s almost antagonistic in a lot of shelters with the vet community and humane societies ” Reason says. “Here we don’t have that. People are understanding that we do not stand alone.”

Spay and neuter is one of the main focuses with every animal being fixed before leaving. And more animals are leaving thanks to the no-kill policy. Reason notes the 5 percent drop in euthanasia since the sheriff’s office took over.

“We’ve developed really great relations with a lot of rescues over the years ” she says. “With the Sheriff’s Department especially we have become very well known in the community so a lot of people come in and adopt from us. Our intakes have gone down due to us being out there and doing a lot of education to the public.”

One factor in the number of adoptions is the unit’s Facebook page found at Facebook.com/NHSOAnimalServices. The page which has more than 12 500 likes features photos of the shelter’s adoptable animals and markets special fundraising events like the annual Bow Wow Luau & Cat’s Meow and Canines & Couture a rescue dog fashion show designed to help raise awareness of puppy mills in North Carolina.

Reason says social media serves as a type of public service announcement that helps people feel more comfortable with stopping in to see adoptable animals or reporting an issue. Many come specifically in search of a dog they saw on Facebook. Wilson notes around 70 people showed up one Saturday morning after the announcement of available black lab mix puppies.

While playing with adorable dogs and cats day-in-and-day-out might sound like a dream job Reason says it’s for a purpose.

“Really to do this job and I speak more for my team it’s not for the money ” she says. “It’s a calling. You have a calling to be here.”

From friendly faces and wagging tails and purring felines to former narcotics agents turned full-time animal lovers Wilson says everyone has a hand at making the shelter and the unit one of the best in the state.

“I am passionate about it much like my people ” he says. “I want the citizens of the county to know what a great unit we have.”