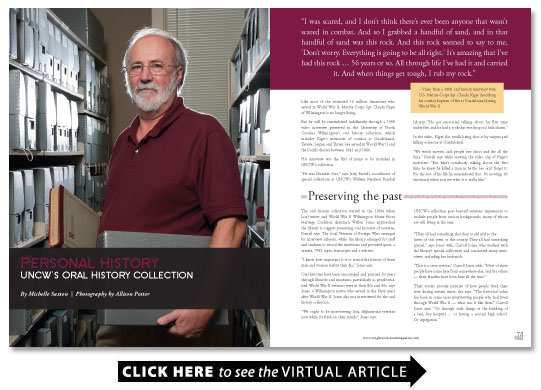 Like most of the estimated 16 million Americans who served in World War II Marine Corps Sgt. Claude Kiger of Wilmington is no longer living.

But he will be remembered indefinitely through a 1998 video interview preserved in the University of North Carolina Wilmingtons oral history collection which includes Kigers memories of combat at Guadalcanal Tarawa Saipan and Tinian. He served in World War II and the Pacific theater between 1941 and 1946.

His interview was the first of many to be included in UNCWs collection.

He was Number One says Jerry Parnell coordinator of special collections at UNCWs William Madison Randall Library. He got emotional talking about his first time under fire and he had a rock that was his good luck charm.

In the video Kiger also recalls being shot at by snipers and killing someone at Guadalcanal.

We watch movies and people just shoot and die all the time Parnell says while viewing the video clip of Kigers interview. But heres somebody talking about the first time he knew he killed a man in battle. He cant forget it. For the rest of his life he remembered that. Its moving; its emotional when you see what it is really like.

The oral history collection started in the 1990s when local writer and World War II Wilmington Home Front Heritage Coalition chairman Wilbur Jones approached the library to suggest preserving oral histories of veterans Parnell says. The local Veterans of Foreign Wars arranged for interview subjects while the library arranged for staff and students to record the interviews and provided space a camera VHS tapes transcripts and a website.

I know how important it is to record the history of these men and women before they die Jones says.

Oral histories have been encouraged and pursued for years through libraries and museums particularly as people realized World War II veterans were in their 80s and 90s says Jones a Wilmington native who served in the Navy years after World War II. Jones also was interviewed for the oral history collection.

We ought to be interviewing Iraq Afghanistan veterans now while its fresh on their minds Jones says.

UNCWs collection goes beyond veterans experiences to include people from various backgrounds many of whom are still living in the area.

They all had something that they could add to the

luster of this town or this county. They all had something special says Jones wife Carroll Jones who worked with the librarys special collections and conducted many interviews including her husbands.

This is a cross section Carroll Jones adds. Most of these people have come here from somewhere else and the others their families have been here all the time.

Their stories provide pictures of how people lived their lives during certain times she says. The historical value has been in some cases interviewing people who had lived through World War II what was it like then? Carroll Jones says. Or through such things as the building of a real live hospital or having a second high school. Orsegregation.

Besides veterans the collection includes people with ties to southeastern North Carolina UNCW and the arts.

We have about 800 oral histories Parnell said. Transcripts are availableonline.

They include Williston High School librarian Bertha Boykin Todd who was also an administrative assistant at John T. Hoggard High School during integration.

In her interview Todd recalls the fascination she drew at Hoggard from white students many of whom she says had not yet seen an educated AfricanAmerican.

Because the only individuals they knew were the cook the maid or the chauffeur Todd says in a transcript of her 2004 interview. So desegregation brought that about. I was outspoken of course.

we were told that blacks were not to be served in the cafeteria Walters says in transcripts from a 2004 interview. And this created a problem and so our instructor Mrs. Ambrose she told the students that until this problem could be ironed out; no one could eat in the cafeteria. All of her girls ate or nobody ate.

As I reflect on Williston and its teachers I never experienced a more dedicated set of teachers and a more energetic group of students striving to become people of the mainstream striving to say to themselves I can do as well as you can do. I can attend the Ivy League colleges and do well. I can perform just as well as anyone. That was my perspective of Williston the teachers dedicated the students energized and doing their very best. As I reflect and think of Williston surely it was the greatest school under the sun.

Mrs. Ambrose was Blanche Ambrose who in the 1960s developed the LPN program at Cape Fear Technical Institute which was later renamed Cape Fear Community College. She also is included in the oral history collection and recalls the day her students could not eat in the same dining room as the worst in her life.

I loved all of my students every one of them. I saw no color with them. And I dont today Ambrose says in transcripts from a 2004 interview.

Nurses also talked about how intense training was living on campus working and going to school.

Very regimented a lot of rules Parnell says. You had to be in by a certain time every night study hall every night in bed get up the next morning go to the hall and work and then go to class then back to work But some fun times they had too.

Oral histories can serve many purposes.

Students have used them as first-hand primary resources for papers including some on World War II Parnell says while others have sought information for genealogy research. And UNCW has used some video clips for an exhibit about nurses.

It includes clips from a 2003 interview with the Rev. Alan Keiran a retired Navy chaplain for the Navy and Marine Corps who more recently has served as chief of staff for the U.S. Senates chaplain office.

Keiran who also served at Camp Lejeune noted his pastoral care duties included helping families cope with the death of a loved one. He recalled one story when he was at Oceana Naval Air Station in Virginia in 1984 and got a call about a baby who had been accidentally shot in the head when the boys father was cleaning a pistol. The fathers hand had been shot as well and he was being treated while the mother waited at the hospital.

The child beat the one-in-1 000 odds of surviving the surgery but was not expected to live beyond a couple of hours and so Keiran prayed with the mother. The next day another chaplain thanked him for his care and Keiran moved on with other duties still praying for the baby.

Six months later a lady came in and I didnt even recognize her. She walked into my office at Oceana and she said Chaplain do you remember me? And I said You look ­familiar. Where do I know you from? She said Well six months ago my baby got shot Keiran recalls in the documentary. She said Hes outside. So she brought him in. His name was Noah. She introduced me to Noah who was about eight months old at the time and by Gods grace alone he survived the surgery survived the trauma of having a bullet go right through his brain and he had no ill effects whatsoever from the trauma of that gunshot.

It is my belief that personal narratives are the key to making history and many other academic subjects interesting and meaningful to students McKnight says in an email later adding Years after learning about Appalachian history and culture in a social studies classroom students might not remember that the Matewan Massacre was a pivotal event in the battle for American (miners) rights but they just might recall how they empathized with the working class miners while reading oral histories of that fateful daysevents.

Personal narratives also may help with other skills.

With text messages growing as a major form of communication high school students can benefit from learning how to conduct interviews for oral histories Jones says. Being able to interview somebody requires … knowing the subject enough to ask legitimate questions … doing some homework on that particular person being interviewed and … having a general idea of what its like to interview Jones says. Thats all part of the communications skills that very likely high school students arent getting anymore.

Copies of some veterans interviews were given to area middle and high schools says John Nelson program director of World WarIIRemembered.

Our mission was to preserve the memories of these guys Nelson says. It was a bit of a legacy move. But it was first person. These guys were there. They saw the bombs they dropped the bombs they saw their buddies killed. Actually history has been kind of revised a lot since then and we wanted to keep it as it was. It was intended to be history lessons for children of This is truly the way it was.

A person in combat or in the armed forces during World War II or any other time only sees that war from his own foxhole Jones says later adding Historians can certainly gain a lot from the oral histories of veterans but they have to be pieced together. They are very anecdotal and thats OK because sometimes anecdotes fit into a narrative by a historian.

The last oral history interview with UNCW was conducted nearly two years ago. In recent years Special Collections and support resources in Technical and Collections Management Services were allocated to special collections and other projects in recent years Parnell says. Much of the previous funding has come from the library and supplemental grants from local business targeted toward specific histories.

The library plans to explore and pursue local state regional and national funding opportunities in the fall as further development designs are under way for oral history current university librarian Sarah Watstein says.

Future ideas include a focus on six areas Watstein says.

*Military chaplains particularly with regard to Dont Ask Dont Tell.

*Montford Point Marines including honoring the legacy of the first African Americans who joined the Marine Corps in the 1940s.

Oral histories are personal memories that show what people lived through and that information may not be recorded anywhere else Parnell says.

Its information you dont find people who arent famous Parnell says. These are regular ordinary people.