Paying Homage to ‘An Aging Life’ 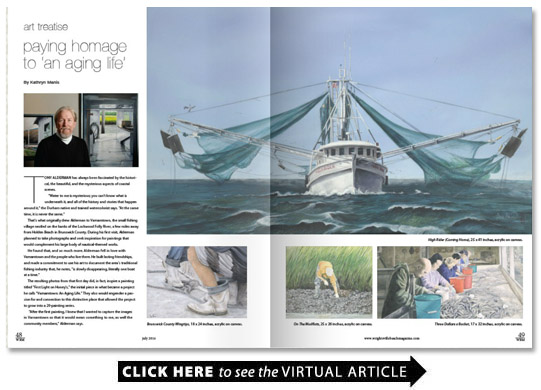 Tony Alderman has always been fascinated by the historical the beautiful and the mysterious aspects of coastal scenes.

“Water to me is mysterious; you can’t know what is underneath it and all of the history and stories that happen around it ” the Durham native and trained watercolorist says. “At the same time it is never the same.”

That’s what originally drew Alderman to Varnamtown the small fishing village nestled on the banks of the Lockwood Folly River a few miles away from Holden Beach in Brunswick County. During his first visit Alderman planned to take photographs and seek inspiration for paintings that would complement his large body of nautical-themed works.

He found that and so much more. Alderman fell in love with Varnamtown and the people who live there. He built lasting friendships and made a commitment to use his art to document the area’s traditional fishing industry that he notes “is slowly disappearing literally one boat at a time.”

The resulting photos from that first day did in fact inspire a painting titled “First Light on Honey’s ” the initial piece in what became a project he calls “Varnamtown: An Aging Life.” They also would engender a passion for and connection to this distinctive place that allowed the project to grow into a 20-painting series.

“After the first painting I knew that I wanted to capture the images in Varnamtown so that it would mean something to me as well the community members ” Alderman says.

“First Light on Honey’s” depicts a swirling fiery sunrise over Garland’s Fresh Seafood fondly called “Honey’s Place” in remembrance of its founder Wesley Garland Varnam’s famous favorite greeting for everyone who came through the doors: “Hello Honey.” Though the artist works primarily in acrylics now his talent with watercolors is evident in the subtle layers of color and delicate brushstrokes of this and other works in the series.

In the American South in particular art cultural preservation and activism have long gone hand-in-hand. Artists and writers have created myriad works to record threatened and unique communities and to educate larger audiences on the battles for existence happening in small towns.

Visual artists like Henry Ossawa Tanner (1859-1937) whose works often feature the everyday lives of black Americans as commentary on social inequality and Winslow Homer (1836-1910) who documented the stoicism and strength of coastal communities have sought to reveal the beauty in the diversity of the United States and to generate broader appreciation for this variation.

Alderman builds on the traditions of both of these artists by depicting everyday scenes with a delicate and deeply felt sense of intimacy. The artist explains that a primary goal for all of his paintings is not just to replicate a scene but to convey the feeling of a particular moment.

“It’s a sharing thing — I want it to be seen and I want people to experience what I was experiencing ” he says.

This is especially evident in works like “Peace ” which captures a calm misty afternoon on the marsh and “Lockwood Folly Mist ” a dock scene that invites the viewer to imagine and appreciate the men and women who will shortly arrive to begin a long day of fishing.

Many of these paintings reveal Alderman’s growing personal connection to the place and its people. Indeed he explains that the “Varnamtown: An Aging Life” project became a collaborative process as he became acquainted with more of the locals and heard their stories.

In some cases this familiarity seems to have indirectly inspired images as with “Brunswick County Wingtips.” This 18-inch by 24-inch canvas pays homage to the men and women working in North Carolina waterways through an interior boat scene closely framing the white rubber boots that are the hallmark of the Southern fisherman.

This image interestingly recalls Vincent van Gogh’s 1887 painting “Les Souliers” (which translates to “A Pair of Boots”). Philosopher and art theorist Martin Heidegger famously described this painting of a well-worn pair of work boots as not only conveying a sense of their owner and his profession but also revealing a “truth” about them both. That is demonstrating the beauty of the often backbreaking work they perform and the social and historical importance of the men who wear them.

A similar romanticism is present in Alderman’s painting and an unmistakable sense of awe and appreciation for the wearers emanates from the soft lines and loose brushstrokes of this piece.

Other works in the series were more directly collaborative. “Stranded ” for example was born when a local friend called with the inside scoop on a boat that had been stranded off Varnamtown’s Sheep Island.

The lone tilting craft makes for an interesting composition and demonstrates Alderman’s skill at representing the faint movement and reflective surface of the Lockwood Folly River. But it also contributes to the air of activism that permeates the entire series.

Alderman who is a member of Brunswick Catch a local organization dedicated to promoting highlighting and sustaining the county’s seafood industry hopes that his work will both honor the people of Varnamtown and educate others about the challenges the traditional fishing industry is facing. He explains that what is occurring in Varnamtown is a microcosm of what is happening up and down the East Coast and to smaller inland farms.

“The more I’ve become involved the more I’ve wanted to document this way of life and if I can do anything to help save some of it I want to ” he says. “It started as an affinity and became more about trying to document this area and its people that literally in five years will be totally different. Part of my job now is to help people understand that.”

The unfortunate boat in “Stranded” represents one of the dichotomies central to discussions of Varnamtown’s past and future: that the community’s connection to an aging way of life is both what attracts us to it and what puts it at risk. The exposed yet majestic representation of this temporarily stranded vessel invokes a similar combination of enduring beauty and unavoidable vulnerability.

Alderman’s “Varnamtown: An Aging Life” project is an important contribution to the arts culture of the Southeast. The artist’s careful and skillful rendering of nautical scenes and masterful evocation of the sense of community nostalgia and history necessary to fully appreciate places like Varnamtown is unmistakable.

At the same time through his collaboration with the Varnamtown community his use of these paintings to generate support for its future and his involvement with Brunswick Catch Alderman continues the important work begun by American artists in the 18th and 19th centuries who used their skills to bring attention and appreciation to vulnerable people and places.

Without these artists a visual record of cultures and people who are important to our understanding of U.S. history and which shape our goals for the future would be missing. As the artist himself writes “The Varnamtown project mission is to preserve on canvas and for future generations the visual history of this way of life.”