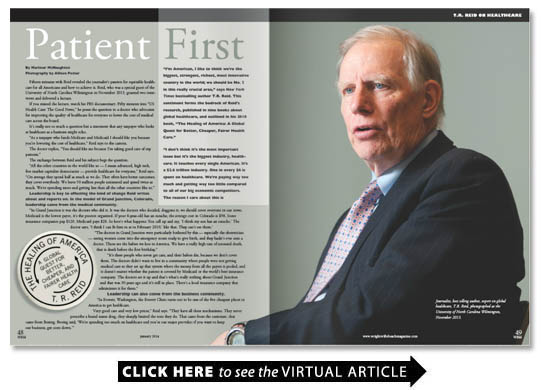 I am American I like to think were the biggest strongest richest most innovative country in the world; we should be No. 1 in this really crucial area says New York Times bestselling author T.R. Reid. This sentiment forms the bedrock of Reids research published in nine books about global healthcare and outlined in his 2010 book The Healing of America: A Global Quest for Better Cheaper Fairer Health Care.

I dont think its the most important issue but its the biggest industry healthcare. It touches every single American. Its a $2.6 trillion industry. One in every $6 is spent on healthcare. Were paying way too much and getting way too little compared to all of our big economic competitors. The reason I care about this is I dont want to see us have a lousy inefficient unfair system.

Fifteen minutes with Reid revealed the journalists passion for equitable healthcare for all Americans and how to achieve it. Reid who was a special guest of the University of North Carolina Wilmington in November 2013 granted two interviews and delivered a lecture.

If you missed the lecture watch his PBS documentary. Fifty minutes into US Health Care: The Good News he poses the question to a doctor who advocates for improving the quality of healthcare for everyone to lower the cost of medical care across the board.

Its really not so much a question but a statement that any taxpayer who looks at healthcare as a business might echo.

As a taxpayer who funds Medicare and Medicaid I should like you because youre lowering the cost of healthcare Reid says to the camera.

The doctor replies You should like me because Im taking good care of my patients.

The exchange between Reid and his subject begs the question.

All the other countries in the world like us — I mean advanced high tech free market capitalist democracies — provide healthcare for everyone Reid says. On average they spend half as much as we do. They often have better outcomes; they cover everybody. We leave 50 million people uninsured and spend twice as much. Were spending more and getting less than all the other countries like us.

Leadership is key to effecting the kind of change Reid writes about and reports on. In the model of Grand Junction Colorado leadership came from the medical community.

In Grand Junction it was the doctors who did it. It was the doctors who decided doggone it we should cover everyone in our town. Medicaid is the lowest payer its the poorest organized. If your 8-year-old has an earache the average cost in Colorado is $98. Some insurance companies pay $120. Medicaid pays $28. So heres what happens: You call up and say I think my son has an earache. The doctor says I think I can fit him in at in February 2019 like that. They cant see them.

The doctors in Grand Junction were particularly bothered by this — especially the obstetrician — seeing women come into the emergency room ready to give birth and they hadnt ever seen a doctor. Those are the babies we lose in America. We have a really high rate of neonatal death that is death before the first birthday.

Its these people who never get care and their babies die because we dont cover them. The doctors didnt want to live in a community where people were not getting medical care so they set up that system where the money from all the payers is pooled and it doesnt matter whether the patient is covered by Medicaid or the worlds best insurance company. The doctors set it up and thats whats really striking about Grand Junction and that was 30 years ago and its still in place. Theres a local insurance company that administers it for them.

Leadership can also come from the business community.

In Everett Washington the Everett Clinic turns out to be one of the five cheapest places in America to get healthcare. Very good care and very low prices Reid says. They have all these mechanisms. They never prescribe a brand name drug they sharply limited the tests they do. That came from the customer that came from Boeing. Boeing said Were spending too much on healthcare and youre our major provider; if you want to keep our business get costs down.

The goal of the Everett Clinic was to reduce healthcare by 25 percent in five years.

Its too hard. Patients dont have the know-how. They dont have the clout. Its a good question because people argue we need consumer-driven healthcare that the patient is responsible and negotiates for a good price he says.

Reid gives the example of a patient who sees a doctor for a headache and is diagnosed with an unpronounceable disease and prescribed 400 milligrams of an equally unpronounceable medication.

In Reids scenario the patient says Gee that sounds expensive how about 100 milligrams?

Patients dont have the knowledge base to advocate for themselves Reid says.

The economists have a term for this: asymmetry of information he explains.

When you go in to see your doctor she knows everything you know nothing except you hurt. You cant negotiate on those terms.

I dont think change can be driven by the patient. They might like it. People in town might want it after our movie there were many places where the chamber of commerce went to the hospitals and the doctors associations and said If Seattle can do it if this little town in Colorado can do lets go. I think the overall community can do some negotiating but individual patients no.

In some states the voters have reached the ear of their legislators. Vermont is setting up a state-run single payer system. The electorates 600 000 left-wing dairy farmers like it Reid says. And with only 2 percent of its population uninsured Massachusetts has the lowest uninsurance rate in America. Nationally Reid says the number is 16 percent. Colorado is 18 percent uninsured.

Reid credits the Massachusetts voters who demanded it and former Governor Mitt Romneys administration for lowering the cost of healthcare in Massachusetts.

Massachusetts is a classic case. The year Mitt Romney was elected both candidates said Im going to provide healthcare for everybody in Massachusetts. They really like what they call Romneycare enacted in 2006.

Communities can demand it Reid says. They can say to their legislature If other communities can do it why cant we? And that works. In Canada Massachusetts Vermont communities can be the driver. But the places it works best are where the doctors thats Grand Junction or the big payers the employers or the insurance companies go to the docs and hospitals and say Fix this and thats where change can come.

The most important thing to do is make the commitment to cover everybody. In my book  the biggest difference between the US and the other rich democracies — Britain Canada Japan Germany — theyre like us but those countries all said Were a rich country were going to supply healthcare for everybody whos sick. And the US has never done that.

In Germany everybody is on private insurance; the docs are private the hospitals are private. Theres no Medicare in Germany. Its all private. Theres no Medicaid thats for poor people. Its all private. In America you know 49 million Americans are on Medicare thats a government-run insurance plan although people on Medicare some of them dont know that. Many countries have less government involvement than the US but they cover everybody. Universal coverage doesnt have to mean socialized medicine. And thats key.

When I went into practice we took care of everybody that walked in our front door says retired surgeon Dr. Ellis Tinsley Sr.

How did we do that? Its because our fees were not cut by the government by 40 percent. Plus we didnt have to hire all these other people that we have to have now to deal with Medicare Medicaid and everything. An office has to have these extra people now to fulfill all rules regulations insurance. We were able to keep our overheads down and practice; we were able to charge the fee that was not cut Tinsley says.

Half of my practice now would be Medicare. The government sets that fee. It doesnt matter what you charge. You can charge anything you want but Medicare is going to charge you so much. Plus the fact Medicare passed a law saying you cant do what we were doing. You cant give free care to a Medicare patient. When I go to the doctor now I pay just like everybody else. We used to never charge medical people.

The person who didnt have anything we took care of them and didnt charge them.

Tinsley attributes the shift from patient care to the profitability of healthcare to a variety of factors.

Were a long way from a patient a doctor and a nurse he adds.

I think medical care dollars should all be directed toward the patient.

Dr. Tinsley was not acquainted with the Grand Junction model documented by T.R. Reid in US Health Care: The Good News but says it would not be possible for a doctor led healthcare program to operate in New Hanover County.

Its in the hands of the government now Tinsley says. Theyre pretty much setting the rules. I dont know where its going to go but its really worrisome. The government is now selling people policies at higher prices with big deductibles that they dont need.

Theyre one-size-fits-all. Some states you have a choice but if you dont need maternity care why do you have to buy a policy that covers that? If you dont need pediatric care why do you have to buy that? If youre a lady why do you have to buy coverage for prostate surgery? Its just crazy what theyve done. Its because the doctors had very little to say what was put in the law. The various lobbies all these insurance companies that are going to sell these policies I think in large part even though they talk a good game and say its all patient directed that were going to take care of the 30 000 40 000 that dont have health insurance thats good but they could have accomplished a lot of those things without doing what theyve done.

When things were changing we actually went to General Electric and said Herere our prices. We will reduce them. If we do your work which means more volume well reduce our prices help everybody reduce the cost but then thats about the time other health insurance things came in. Its just hard to keep it all organized.

When Blue Cross/Blue Shield was established in North Carolina Tinsley says the board was primarily made up of medical profesionals.

The board up in Raleigh they decided they shouldnt have all medical people because theyre just going to take care of themselves when the whole profession is dedicated toward taking care of the patient. So they had other people put on the board and then you had other insurance companies come in and you had competition there.

Its a real mess. Thats not to say it doesnt need to be changed and reorganized but whats best for the patient should be the bottom principle more than anything else and Im not so sure thats what the deal is.

Thats why I say I hope from the standpoint of the person who takes care of you when you get sick I hope all this business stuff doesnt detract from the advances the technology and the fun of taking care of you and getting you well and Im afraid its going to.