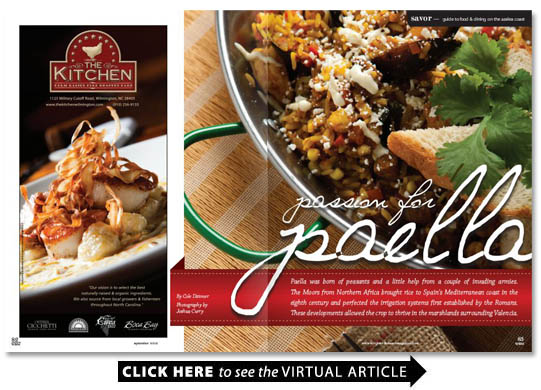 Although the Spanish peasantrys preferred proteins land snails and eels from Lake Albufera are absent from most modern-day paella recipes the one thing about authentic paellas that remains unchanged is the fact that it is a rice dish first.

Traditionally paella is cooked over a wood-burning fire in a pan also called a paella that can measure up to six feet in diameter. The main ingredients of the traditional paella or the Paella de Valenciana are short grain Spanish rice saffron chicken chorizo lobster shrimp clams or mussels and a variety of fresh vegetables like onions scallions and peas. Once the paella is fully cooked a thin crust of caramelized rice called the socarrat forms on the bottom of the pan and is considered to be the most desirable part of the paella.

For paella lovers or those new to the dish chefs like Trinity Hunt of Mixto downtown Wilmingtons contemporary Latin eatery have adapted the methods and ingredients of the Valencian tradition to suit what is available in their own regional markets to fashion unique twists on this classic Spanish dish.

A member of the graduating class of Johnson and Wales Universitys first year in Charlotte Hunt took over the Mixto kitchen as the executive chef a year ago after working as a sous chef under Keith Rhodes at Deluxe. Hunt says it was while he was in school and working in Charlotte that he first fell in love with Spanish cuisine. It was at the Charlotte restaurant Arpa that he made his first authentic paella.

In keeping with the original spirit of the dish Hunt says what is available at the local farmers markets has a big influence on the ingredients he uses in his paellas.

I hit the farmers market on Saturdays to gear my weekly specials to localism what people like to eat around here and what is available Hunt says. Paellas are a lot like a puttanesca. Its just what do you have in the kitchen?

Tonight Im making one with long grain wild rice from South Carolina paired with duck clams and lobster pulling from the flavors of the Moors with some fresh vegetables peppers garlic aioli and a romesco sauce in with the rice like a sofrito Hunt says. Originally it was three versions [of paella] but with each version you can take whatever is prevalent for your area and incorporate that.

Variations of the recipe lend themselves to the nature of Hunts style. Instead of using the short grain Spanish rice and saffron typically found in most traditional
recipes Hunt utilizes local long grain rice varieties and turmeric in their place.
These two substitutes help to lower price points and ticket times while reflecting Hunts desire to impart flavors from southeastern North Carolina and Latin America.

I use that [turmeric] to get that color contrast instead of saffron Hunt says. Just keeping that European flair but infusing it with Latin flavors.

Despite the alterations Hunt has made to create his Mixto paellas he says the fundamental concepts of showcasing the rice and combining ingredients that are readily available remain true to tradition. Like the paella cooks before him Hunt is dedicated to producing the crispy and savory socarrat each and every time.

You definitely have to get that little bit of crust he says. Sometimes I lose some of it when I transfer it to a bowl but it is there when it comes out of the oven so I know it is cooked right.

Throughout Spains history paella has served as the focal point of many Sunday afternoon family feasts extending into the evening. This romantic image of a hungry family gathered around an oversized iron skillet is hard to replicate in modern-day restaurants but what remains is an intense passion for paella felt by those who have come to love the dish.

To assemble the dish:

Add rice and toss or use tongs to mix ingredients.

Season with salt and pepper and add cilantro
right before cooking in oven for 6-8 minutes.