Passion and Style in Design 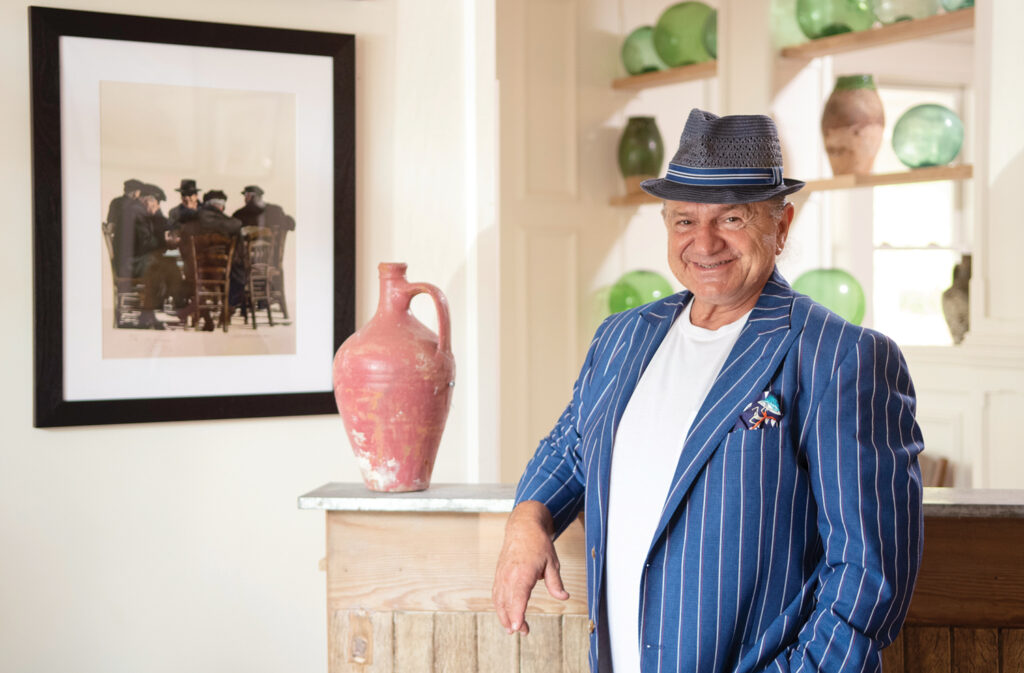 Giorgios Bakatsias at the welcoming desk. Photo by Allison Potter

Wearing a fedora and white linen shirt, restaurateur and designer Giorgios Bakatsias walks through the final touches being made to his latest restaurant — this one in Wilmington at Lumina Station.

Kipos Hellenic Cuisine is set to open in July 2022.

He greets you as if he’s known you for years, it feels as if he’s welcoming you into his home for dinner.

Evoking happiness is what Bakatsias desires for those who visit his restaurants.

“Everything is about bringing joyful moments,” he says.

Bakatsias (pronounced Bah-ka-cha) was named the 2022 Restaurateur of the Year by the North Carolina Restaurant and Lodging Association. Kipos will be his 15th restaurant under the Giorgios Hospitality Group label. Others include Rosewater in Raleigh, Parizade and Vin Rouge in Durham, Farm Table in Wake Forest and Bin 54 and Kipos Greek Taverna in Chapel Hill. The new Kipos — which means “garden” in Greek — has taken over Lumina Station’s anchor restaurant space at 1900 Eastwood Road, formerly the 1900 Restaurant Lounge.

A complete interior renovation has transformed the space into the feel of the legendary Greek island of Santorini, with new crisp white walls replacing dark wood paneling and newly refinished whitewashed wood flooring. A central element, the 17-seat bar once stained black, has been hand scraped and topped with a white quartz counter.

“We scraped it and said, ‘Wow! This is kind of funky in a good way, so let’s leave it, it really pulls everything together,’” says Bakatsias.

Architect John Rees and Bakatsias had planned to paint the massive bar that lines the length of the restaurant, but as it was being prepped for painting, the original wood came through and plans changed.

“We allowed the space to breathe. In design, sometimes you can turn the knob up a little bit or a lot. You have to know how much to turn because you can turn it too much and it becomes forced or you can turn it just enough and it finds its balance,” says Bakatsias, who has also helped numerous other restaurants achieve their own look and brand through design.

The renovation is a collaboration of Rees Architecture PC and Connette Building and Development JR, with Bakatsias himself as the lead designer. Lighting design is by M2C Studio.

A white framed mirror in the back hall is for staff to examine themselves. “Life having not examined is not one that’s worth living,” Bakatsias says.

The menu he designed will focus on local seafood and authentic Hellenic dishes.

“Food is a connective energy around the table. No matter what your differences or similarities, a table filled with love and food always has a common denominator,” says Bakatsias.

Bakatsias grew up in Karitsa, a small village in Greece where there were no grocery stores or restaurants, only the land and a mother who knew how to cook.“My mother had the ability to fill a table up with an abundance from the garden. She could make magic with an eggplant and a potato,” says Bakatsias.

He spent his childhood collecting wild herbs in the mountains, using them in dishes he prepared with his mother. Later, through training in New York, Paris and the Mediterranean, Bakatsias further developed creative ways to accentuate a food’s natural elements.

He carries that same concept through to the design of his restaurants, using natural materials while marrying in stylish accents of Greek flair. For Lumina Station, it was about lightening and brightening a dark and dated space.

“The space before was extremely dark, everything was layers of darkness, so how do we transform that?” says Bakatsias. “For a Greek concept, we take it back to the natural ingredients and the natural materials.”

Thoughtfully arranged are wood tabletops with iron or wood stands paired with seating of velvety moss green upholstery for date nights or parties of four, six, eight or 10 diners. There is seating inside for 140 guests.

“You have to have tables that feel comfortable for two guests, six guests or a larger group. In design you have to make sure all the tables are not the same,” Bakatsias says.

Bakatsias visited the showroom of lighting design firm M2C Studio and fell in love with its custom chandeliers and sconces made of brass and linen.

“Giorgios felt they represented the coastal seaside of Greece,” says Stuart Gans who owns the company located in Wrightsville Beach and High Point with his wife, Leyla.

Leyla is the designer. She created original pendant and sconce lighting for Kipos.

“We took in the colors of the Greek isles like the blues and put in those accent colors,” says Leyla. She uses a contrast of solid brass and soft fibers in her designs. “I love mixing a little bit of hardness with femininity. Fiber is very central, like a woman’s hair it has movement,” she says.

The pendants over tables and the bar are circular-mini chandeliers that cast a sunburst shadow. Bakatsias calls them lanterns.

“They are playful, but at the same time, very chic,” says Leyla.

Matching wall sconces are called sol mio, which means “my sun” in Spanish.

“The strings that come down are almost like you’re at the beach and your hair runs wild. It will bring some romance in the space, that’s what I’m looking for,” says Bakatsias.

They produce a comforting glow.

“You’ll see and feel the light, but it will not be in your face. The objective here is I wanted to bring the sand, earthiness, the wood, the light to be there in a very mysterious way — not overwhelming,” Bakatsias says.

Beside the restaurant’s tall wooden welcoming desk, guests are treated to a collection of black framed photos of iconic Greek moments such as the dancing scene of the movie Zorba the Greek, a large portrait of famous Greek opera singer Maria Callas (1923-1977), and a photo of raw octopus hanging to dry. Grilled octopus is a popular Greek dish. (Bakatsias will serve it with fennel.)

The much needed renovation produced a fresh new look. “The bones were there, the functionality was there, it was mainly the décor,” says Rees. “We repainted and restained the entire restaurant into a light, bright Greek theme.”

A glassed-in front room for private parties has a drum chandelier, by a vendor in San Francisco, that resembles a coral reef.

Mediterranean Greek-style pots large and small and glass fishing floats are scattered throughout.

“My mother used to say, ‘Giorgios, where did you get this expensive taste, you grew up in a village,’” Bakatsias laughs.

At the far end of the restaurant, the back wall is covered in a glazed zellige subway tile in hues of blue to mimic the ocean for the cold bar made of reclaimed wood.

Outdoor seating areas will allow guests to experience dining in a Greek garden.

Hanging in the garden’s tree branches are elements native to Greece where Greek fishing boats are docked that are pleasing to the eye.

Bakatsias immigrated to the United States from Greece when he was 12 to live atop his brother Johnny’s diner in Burlington, North Carolina.

“I learned a lot about work ethic from Johnny,” says Bakatsias.

In 1978, when he was just 21, Bakatsias opened his first restaurant named BC, which stood for Bakatsias Cuisine. It was the first Greek fine dining restaurant in the Triangle.

Kipos will offer many traditional Greek favorites such as avgolemono (chicken and rice soup), spanakopita (a baked pie of crispy layers of flaky phyllo dough filled with spinach and feta) and moussaka (eggplant, beef, potato, béchamel soufflé) as well as many locally sourced seafood dishes and fresh salads.

“That excites me because the body recognizes the clarity of great ingredients,” says Bakatsias.

Just as he demonstrates in his décor choices, Bakatsias also believes in letting the natural tastes of the food shine through.

“When I was in Wilmington at the market, I found some grouper and swordfish and cooked it in a way with just a light poaching with a touch of saffron and it became so delicate,” he says. “For me, I react with the ingredients.”

The ingredients of the design are an important component of any experience. Bakatsias is excited for guests to enjoy the food and the new light and airy feel of the space.

“Being that it’s coastal and Greek, we have chosen these light surfaces so when you walk in your heart opens up with brilliant lightness to bring happiness and joy. Design has to come from the heart,” says Bakatsias.