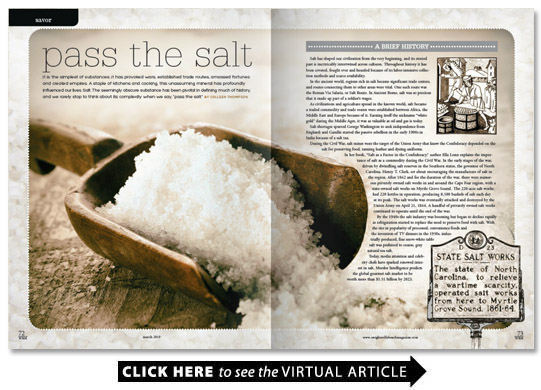 Salt has shaped our civilization from the very beginning and its storied past is inextricably intertwined across cultures. Throughout history it has been coveted fought over and hoarded because of its labor-intensive collection methods and scarce availability.

In the ancient world regions rich in salt became significant trade centers and routes connecting them to other areas were vital. One such route was the Roman Via Salaria or Salt Route. In Ancient Rome salt was so precious that it made up part of a soldier’s wages.

As civilizations and agriculture spread in the known world salt became a traded commodity and trade routes were established between Africa the Middle East and Europe because of it. Earning itself the nickname “white gold” during the Middle Ages it was as valuable as oil and gas is today.

Salt shortages spurred George Washington to seek independence from England; and Gandhi started the passive rebellion in the early 1900s in India because of a salt tax.

During the Civil War salt mines were the target of the Union Army that knew the Confederacy depended on the salt for preserving food tanning leather and dyeing uniforms.

In her book “Salt as a Factor in the Confederacy ” author Ella Lonn explains the importance of salt as a commodity during the Civil War. In the early stages of the war driven by dwindling salt reserves in the Southern states the governor of North Carolina Henry T. Clark set about encouraging the manufacture of salt in the region. After 1862 and for the duration of the war there were numerous privately owned salt works in and around the Cape Fear region with a state-owned salt works on Myrtle Grove Sound. The 220-acre salt works had 220 kettles in operation producing 8 500 bushels of salt each day at its peak. The salt works was eventually attacked and destroyed by the UnionArmy on April 21 1864. A handful of privately owned salt works continued to operate until the end of the war.

By the 1940s the salt industry was booming but began to decline rapidly as refrigeration started to replace the need to preserve food with salt. With the rise in popularity of processed convenience foods and the invention of TV dinners in the 1950s industrially produced fine snow-white table salt was preferred to coarse gray natural sea salt.

Today media attention and celebrity chefs have sparked renewed interest in salt. Mordor Intelligence predicts the global gourmet salt market to be worth more than $1.51billion by 2023.

All salt is sea salt collected from ocean water or mined from salt deposits left behind. The deposits are found on mountains on desert flats or in underground caverns and each has different characteristics and flavor profiles influenced by mineral makeup age compression and the surrounding fauna and flora all reflecting the terroir. As food continues to trend toward local sustainable and artisan-made more and more American gourmet salt producers are seeking out the old tradition of salt harvesting.

About a seven-hour drive northwest from coastal North Carolina an intrepid road-tripper can find J.Q. Dickinson Salt-Works nestled in the Kanawha River Valley in West Virginia. The owners Nancy Bruns and Lewis Payne are siblings and seventh-generation salt makers. They harvest small-batch finishing salt from the ancient Iapetus Ocean that lies trapped 300 feet beneath the mountains of Appalachia. An underground brine aquifer extracts the water from a well into a holding tank where the moisture is evaporated naturally using the sun and mountain breezes. The resulting delicate crystals are then gathered using wooden rakes.

Locals Amanda and Dave Jacobs discovered that the fast-moving clean Atlantic Ocean water around Wrightsville Beach makes for delicious-tasting salt and formed the Sea Love Sea Salt Co. As a testament to the product several North Carolina chefs are using their salt. Chef Travis Myers of Willow’s Bistro in Winston-Salem described the salt as “snowflakes of the sea ” delicate in weight and powerful in flavor.

Brian and Shaena McMahon started Hatteras Saltworks in Buxton on Hatteras Island. Their unique location offers a pristine source of water due to the Labrador Current meeting the Gulf Stream right where they collect seawater. Chef Craig Readman of Heart Restaurant in Duck uses their smoked pecan salt in a grilled pineapple margarita; and chef Dan Lewis owner of Coastal Provisions in Southern Shores pairs fresh Outer Banks oysters with their salt.

Today’s more tactile hands-on approach to cooking using authentic products has created more attention on salt and how to use it to build flavor.

There is a two-tier approach to using salt: multipurpose salt for basic flavor and finishing salt added for texture and flavor.

French for “the flower of salt ” this salt has been hand harvested for centuries in Brittany. A thin crust forms on the surface of seawaterfrom open-air salt ponds which are then raked by hand. The fine crystals that form are prized for their faint flavor and aroma of violets. Collecting the salt is extremely labor intensive and therefore it is only produced in small quantities making it expensive. The salt contains a higher moisture content than other salts which means the crystals stick together and don’t dissolve immediately giving rise to prolonged flavor. Pale pink varieties from a pink microalga can sometimes be found.

This salt has been hand harvested for more than a century by the Osborne family from the spring tides of an estuary in the Black River of Essex England. The naturally formed pyramid crystals are its signature characteristic. Maldon was granted a Royal Warrant by Her Majesty Queen Elizabeth II in 2012.

Mined in the Khewa Salt Mine in the Punjab region of Pakistan Himalayan pink salt is only reserved for royalty. The pale pink color is from the iron oxide found in the salt. It is touted as one of the healthiest salts and contains around 80 different minerals. The salt is stone ground and therefore results in larger crystals.

This “gray salt” is harvested from the porcelain clay of the same lakes and pans as fleur de sel but is raked from the bottom giving it a gray hue. The crystals are rough and granular and contain more moisture and minerals than other salt.

These occur naturally as little spheres and are hand harvested from Lake Assal in the Danakil Desert Africa.

Shio has been produced in Japan for thousands of years sourced from water 2 000 feet deep which is heated over wood-fired cauldrons and agitated with wooden paddles. The result is pure tiny microscopic salt crystals.

Harvested from the pools that form from lava flows the charcoal-colored crystals have smoky sweet notes.

Trademark pyramid-shaped salt crystal Cyprus is collected from seawater that is pumped in from the Mediterranean Sea and then gradually evaporated using solar methods.