BY Amanda Wager and Amanda Raxlin 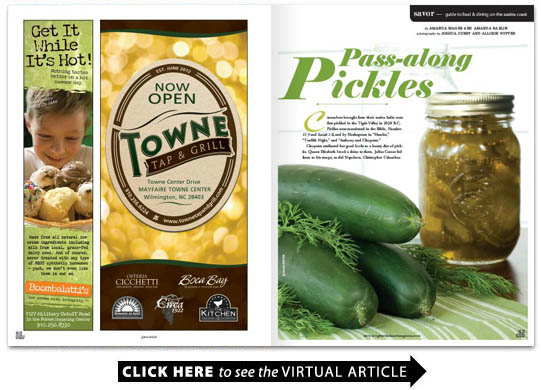 Cucumbers brought from their native India were first pickled in the Tigris Valley in 2030 B.C. Pickles were mentioned in the Bible Numbers 11:5 and Isaiah 1:8 and by Shakespeare in “Hamlet ” “Twelfth Night ” and “Anthony and Cleopatra.”

Cleopatra attributed her good looks to a hearty diet of pickles. Queen Elizabeth I took a shine to them. Julius Caesar fed them to his troops as did Napoleon. Christopher Columbus is credited with bringing them to the New World where he raised cucumbers on Haiti for the purpose of pickling and Amerigo Vespucci was a pickle peddler before he set out to make landfall in North Carolina and carried barrels of pickled vegetables on board his ships.

Even though the Mason jar was not invented until 1858 and the Mount Olive Pickle Company was not founded in North Carolina until 1926 one of the fathers of our country Thomas Jefferson perhaps summed it up best when he wrote: “On a hot day in Virginia I know of nothing more comforting than a fine spiced pickle brought up trout-like from the sparkling depths of the aromatic jar below the stairs of Aunt Sallys cellar.”

Carolyn Hall of the Ministering Circle has spent her life in Wilmington pickling ever since she was a young girl.

“Momma always pickled and I enjoyed doing it ” Hall says.

Carolyn knows every pot utensil and tool needed for the pickling process: scales meat grinder mandolin large porcelain or stainless steel pot for soaking and cooking several colanders ladles and funnels for finishing lids and jars for canning and racks to cool.

“Pickling is a lot of trouble but I have a lot of fun doing it ” Hall says.

This month as the ladies of the Ministering Circle start planning their annual fall sale one among them will be missed. Carolyn Halls sister-in-law Jean Hall Wessell passed away last winter at age 98. She served the nonprofit organization that supports health care projects in the local community for more than 50 years and she passed along her handwritten recipe book that dates back to the 1960s to her daughter-in-law Jan Wessell of Harbor Island.

“Most of the recipes have notes that only Jean could have understood ” Jan says including the ingredients she bought and how much she paid for them as noted in this phrase: “1984-1 bushel of green tomatoes-$7 makes so many pots etc. etc.”

“The cookbook also includes her own cooking terms like sort of hot heaping half teaspoon and add a little extra sugar ” Jan says.

Origins of the recipes like Mrs. Hardestys Pickle are unknown but there is no doubt that Jean Hall Wessell was a pioneer of pickling. Amanda Wager

To each quart jar that has been sterilized add:

Mrs. Hardesty’s Pickle from the cookbook of Jean Hall Wessell

Boil for 20 minutes then pour over vegetables that have been cooked in a crock pot. Place in sterilized jars.

When it comes to canning Kathryn Calvert knows her stuff. To her family shes Oma and to her pickle fans shes the master. Endowed by a pass-along pickling process a secret ingredient and a technique with a twist Omas pickles are served cold and crispy sweet with a hint of smokey dill eaten with a pickle fork straight from the jar or paired with a sandwich.

Most picklers start with fresh cucumbers but not Oma. Her secret ingredient? Mt. Olive Kosher Dill Pickles. Made in bulk-sized batches and stored in gallon jars family and friends frequently raid her pantry.

“Its quite easy ” Oma says. “Anyone who wants to make them can do it.”

First soak the Mt. Olive Kosher Dill Pickles in 10 percent brine (2 cups salt 1 quart water). Then wash off the brine and slice the pickles. Put the pickles to the side and combine four cups of vinegar and four cups sugar in a large pot.

“I know it sounds like a lot ” she says “but trust me they only taste this good because of the sugar.”

“The cloves give the mixture that spice that everyone tends to like in their pickles ” she explains.

She insists that the pickles must be completely blended with the spices to be perfect.

“Shake it as much as you want ” she says. “You have to get all those flavors to meld.” Finally Oma layers the slices of pickles carefully into her jar and seals it up. Oma wont take credit for the recipe. She attributes it to a dear friend who passed away.

“She would always make these pickles and bring them to church picnics and gatherings. “I finally asked her for the recipe and she was more than happy to pass it on ” Oma says. “I make these pickles with her in mind.” Amanda Raxlin

After a hot summer day at the beach cool off with a hot pickle dipped in ranch dressing. Paired with a glass of iced lemonade a hot basket of Southern fried pickles is the ticket. Toasted-spiced crunch with a tangy soft center the house special app at South Beach Grill piques your taste buds with every bite. Sweeten the experience snack al fresco in the shade of the grills outdoor pavilion and enjoy the sultry southwestern breezes in full view of the Banks Channel mooring across the street from the town dock. Amanda Raxlin

Instead of serving bread before the meal Crow Hill serves its house pickle a rustic blend of vegetables saturated in an apple cider vinegar brew that includes the classic pickling spices such as coriander mustard seed and cloves.

Executive chef Chris Troncoso explains the delicate process of wrapping the herbs in cheesecloth forming a small sachet that allows the spices to be boiled into the vinegar. Into the broth he combines locally-grown cucumbers fresh red bell peppers onions and carrots. Presented in a snap tight lid canister for an authentic rustic look the pickled salad is crunchy and fresh enjoyed with relish. Amanda Raxlin

She picked a pack of pickled peppers

Fresh cut vegetables boiling pots on the stove and the aroma of garlic and spices the pickling process for Angela Cannon owner of Angelas Pepper-Pickled Foods is just as simple as the old-fashioned at-home process.

“Pickling used to be what you had to do to survive ” Cannon says. “Now people are getting back into pickling and home-grown foods with the Where does your food come from? movement.”

When the crops are ready each vegetable is bought from a North Carolina farmer. They are cut to size and prepped for pickling. The Mason jars are scalded and sterilized for placement of the raw ingredients garlic and sometimes sweet onions.

While stuffing the jars the hot vinegar recipe is cooking on the stove. It is then poured into the jars. Angela frees the excess bubbles topping off the jar with more vegetables and the correct spices for the recipe.

“The placement of the vegetables in the jars is very important ” she says. Each finished jar must look exactly as appealing as the next.

The final step is to put a warmed lid on the jars and boil them in a large pot of water. This method sets the seal and readies them for sale.

But you dont have to wait for others pickled foods to feel good about what youre eating.

“If you have a garden you can pickle ” she says. Amanda Wager