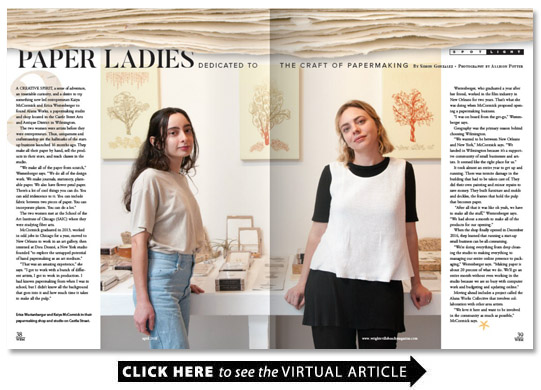 A creative spirit a sense of adventure an insatiable curiosity and a desire to try something new led entrepreneurs Kaiya McCormick and Erica Westenberger to found Aluna Works a papermaking studio and shop located in the Castle Street Arts and Antique District in Wilmington.

The two women were artists before they were entrepreneurs. Thus uniqueness and craftsmanship are the hallmarks of the start-up business launched 16 months ago. They make all their paper by hand sell the products in their store and teach classes in the studio.

“We make all of the paper from scratch ” Westenberger says. “We do all of the design work. We make journals stationery plantable paper. We also have flower petal paper. There’s a lot of cool things you can do. You can add iridescence to it. You can include fabric between two pieces of paper. You can incorporate plants. You can do a lot.”

The two women met at the School of the Art Institute of Chicago (SAIC) where they were studying fiber arts.

McCormick graduated in 2013 worked in odd jobs in Chicago for a year moved to New Orleans to work in an art gallery then interned at Dieu Donn� a New York studio founded “to explore the untapped potential of hand papermaking as an art medium.”

“That was an amazing experience ” she says. “I got to work with a bunch of different artists I got to work in production. I had known papermaking from when I was in school but I didn’t know all the background that goes into it and how much time it takes to make all the pulp.”

Westenberger who graduated a year after her friend worked in the film industry in New Orleans for two years. That’s what she was doing when McCormick proposed opening a papermaking business.

“I was on board from the get-go ” Westenberger says.

Geography was the primary reason behind choosing Wilmington.

“We wanted to be between New Orleans and New York ” McCormick says. “We landed in Wilmington because it’s a supportive community of small businesses and artists. It seemed like the right place for us.”

It took almost an entire year to get up and running. There was termite damage in the building that had to be taken care of. They did their own painting and minor repairs to save money. They built furniture and molds and deckles the frames that hold the pulp that becomes paper.

“After all that it was like oh yeah we have to make all the stuff ” Westernberger says. “We had about a month to make all of the products for our opening.”

When the shop finally opened in December 2016 they learned that running a start-up small business can be all-consuming.

“We’re doing everything from deep cleaning the studio to making everything to managing our entire online presence to packaging ” Westenberger says. “Making paper is about 20 percent of what we do. We’ll go an entire month without even working in the studio because we are so busy with computer work and budgeting and updating online.”

Moving ahead includes a project called the Aluna Works Collective that involves collaboration with other area artists.

“We love it here and want to be involved in the community as much as possible ” McCormick says.