Sometimes a boat is more than just a boat. Sometimes its a piece of history an object of affection a story of family a gathering of friends and a lifetime of dedication. 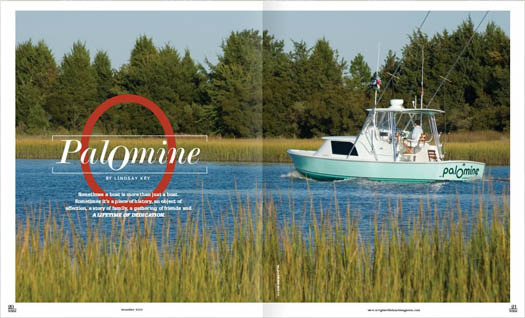 Since 1966 the Palomine has held a special place in the Wrightsville Beach marina landscape her classic lines poised triumphantly against the sky. At the time of her purchase from a Miami builder she was the areas only Bertram 31 Express fishing vessel distinguished by a deep-V hull that allowed her to quickly cut through the water and a cockpit helm that let boaters fish and steer simultaneously.

Many hurricanes and restorations later she remains an anomaly at Wrightsville Beach and as far as many local fishermen can guess shes the only B31 Express around.

When the Bertram 31 boats hit the market in 1961 their hulls designed by Ray Hunt and built by Richard Bertram were considered revolutionary. In Hunts design the dead-rise the amount of V shape in the bottom of the hull was carried all the way to the transom to eliminate pounding in rough waters.

The degree of dead-rise in the hull of a boat is most suitable when it fits the boats function. A deep-V hull (about 24 degrees of dead-rise) makes for an ideal deep-sea fishing boat because it can withstand turbulent waves. In contrast a flatter-bottomed boat will provide a steady ride in calm waters but may be tossed in rougher currents.

It was its distinct hull that first set the Bertram 31 apart. An Express version of the boat was geared even more towards the sports fisherman. Express versions were only made for a few years. They were built without flying bridges. Instead helms were located in the cockpit where a fisherman could fish and steer at the same time.

“My dad wanted a style of boat where he could be part of the group that was fishing as opposed to a flying bridge model where you are really kind of isolated ” says Bill Cameron. “We were the only Express version on the entire beach.”

As their popularity caught fire Bertram 31 boats picked up nicknames like B31s or Moppies the name of the first B31 ever built and also the nickname of Richard Bertrams wife.

Although primarily used as a fishing boat for king mackerel dolphin and blue fish in Masons Inlet the Camerons enjoyed family picnics and water skiing with the Betty C. When the family moved from Wrightsville Beach to Figure 8 Island she remained docked at Bradley Creek Marina and continued to be a Wrightsville Beach icon. Even as a youngster Bill Cameron understood how special the boat was. It remained in the family when he left for college and hed often invite his friends home to cruise the sea and check out the boat. “Its a great riding boat. Some of my best memories are growing up on that boat ” he says.

The new owners set out to turn the boat into a fishing machine that could be used in highly competitive Marlin tournaments. Newkirk repainted the boat giving it a bright red North Carolina State University hull a blue bottom and a white stripe around the water line. He added a new power system and a half-tower flying bridge with a steering wheel for increased visibility.

“He was one of the first guys around here to recognize the need for a half tower not a full tower but a half tower that increased visibility but wasnt too high to make the boat rock ” says Haywood Newkirk Jr. “Now that type of tower is very prevalent on Express boats.” Later it would be dismantled.

Even now B31s are considered a popular choice for sports fishermen. Marlin magazine still includes the Bertrams in their top 10 sportsfishing boats of all time according to an article by sports and boats enthusiast Capt. Mike Holmes.

In the late 1980s Newkirk sold the boat to local architect Ken McGee who named the boat Burning Desire and re-powered it switching out the gas engines for diesel. McGee owned it for a couple of decades before selling it to Lin Spears a Wrightsville Beach boat mortgage banker. Spears bought a boat slip from McGee in Crockers Landing and the boat came with it. Then in 2007 it fell into the hands of a long-time admirer.

Marshall Ritchie became enamored with Palomine when he was a college student visiting his familys second home at Wrightsville Beach.

“Everybody knew the boat ” Ritchie says. “I fell in love with it as a young guy who loved fishing and loved boats. The design is very distinct.”

When Ritchie found out that Spears his brother-in-law had acquired the boat he was ecstatic. He bought the boat from Spears and restored the running gears and engines. Although Ritchie lives in Concord North Carolina he was able to make frequent trips to the area to spend time with his dream boat.

He hired Robby Hall of Halls Boat Repair to handle the two-year reconstruction and design which included refurbishing the diesel-powered engines and a fiberglass deck system to replace the rotting wooden deck as well as replacing the original metal-frame windshield with a fixed fiberglass windscreen.

The cabin of the boat was gutted and an old dated settee was replaced with a spare berth and a new freshwater tank. An air conditioning system and a shower were installed. The interior was painted bright white and the exterior was painted a seafoam green with the name Palomine scrawled across.

“Everybody uses the word gutted but this truly was ” Ritchie says of the project. Since the restoration Ritchie and his family have spent many days on the boat cruising and docking in marinas as far north as Morehead City and as far south as Bald Head Island. This fall they hope to take it to the Bahamas for the first time.

Ritchie considers the boat a modern classic. Hes not alone in his fascination with the B31s. During the past decade demand for these sturdy yet speedy vessels has reached almost cult status according to Holmes.

Boat enthusiasts are prowling for old models to renovate from the hull up adding diesel power generators and air conditioning. Ironically these renovations often cost 10 to 20 times more than what the first B31s cost in the 1960s. The boat even has its own website www.Bertram31.com created by Capt. Patrick McCrary a Bertram 31 enthusiast who wanted to create a space where owners and potential buyers could share tips.

“A B31 is a sportfishing classic and they are still extremely important today ” says Haywood Newkirk Jr. “Theres a premium for these boats.”

Just ask the Camerons the Newkirks the McGees and the Ritchies.