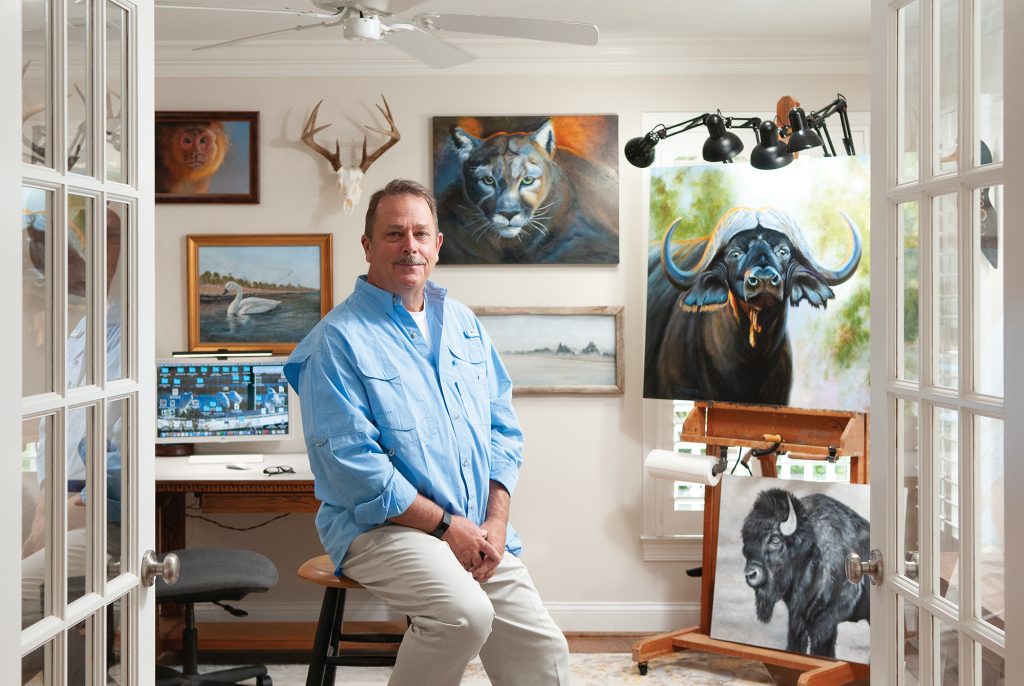 David Starbuck and wife, Michelle, were in Alaska on a fly-fishing trip, waiting on shore for their ride. As the boat to pick them up rounded the corner and came into view, all the passengers on board pointed at the Starbucks and screamed, “Bear!”

A rather large grizzly was walking their way and the only thing on Starbuck’s mind was the incredible photos he was about to get.

“Thankfully, I had just changed to a telephoto lens on my camera,” Starbuck says. “We got on the boat and I’m just clicking away.”

The up-close encounter and once-in-a lifetime photos taken of a real-life grizzly would later inspire a series of paintings of bears, including a 24-by-18-inch oil of a black bear entitled “Westerly.” Black bears, native to North Carolina, have come in proximity to Starbuck as well.

Starbuck has become an award-winning artist in his second career. He is a former computer chip sales executive who turned to painting after retirement, awakening a childhood talent he never had time to pursue.

“I hadn’t painted since I was 13 years old,” he says. “My family gave me an easel and some paints a few Christmases back, and one night I took them out and started painting.”

Well-known wildlife artist Duane Raver took Starbuck under his wing after one look at his first works.

“He said, ‘So you’re telling me these are the first paintings you’ve ever done and you haven’t painted since you were 13?’ He said, ‘You need to pursue this,’” Starbuck says.

And so he did, focusing on the great outdoors. A lifelong hunter, Starbuck many times spots his subjects while sitting in a tree stand for eight hours on a Saturday. He uses his camera to capture reference material — the lighting, the scale of the animal and the emotion.

A pair of does was grazing on his son-in-law’s cotton farm late one evening. The scene is now a gallery wrapped oil hung in Starbuck’s studio, a painting he calls “Girl’s Happy Hour.”

“I never make it up, all of my pieces come from something emotional that I’ve connected to,” Starbuck says.

“Down Climber” is a painting of a nuthatch that caught Starbuck’s attention; it’s the only bird able to climb headfirst down a tree. “Little Miss Bluebill” is of a lesser scaup bluebill that was taking a swim in the pond when David and Michelle visited Duke Gardens.

Earlier paintings that detail every hair and feather with acrylics hang on the wall just outside the bedroom his granddaughters use when they visit. It’s a wall full of discovery for young girls. There’s a bunny sitting in a marsh, a painting of the family dog, and birds in trees.

A transition to oil paints gave Starbuck freedom to expand to impressionistic style — true art, he says, instead of an illustration.

“It’s creating the illusion,” Starbuck says. “You see what’s there without me pointing to exactly what’s there. I paint enough to where your mind will gravitate to it versus me giving you the complete script.”

His home studio is filled with more recent works, all oil paintings, many of which are nearing completion.

“I had a mentor say once you finish a piece don’t touch it anymore, and another mentor say a painting is not done until it’s sold,” he says.

The Cape buffalo, also called black death, is known to have killed more big game hunters than any other animal in Africa. Starbuck is working on a 48-by-36-inch painting of the beast.

A cardinal in a tree entitled “Our State Bird” evoked an emotional response from one art enthusiast attending a Starbuck show.

“There was a lady, she was in tears,” he says. “She said native folklore says when you see a cardinal, it’s your ancestors coming back to visit. She said, ‘I lost my mom six months ago and every time I see a cardinal I break down and think of my mom.’  When you touch into the heart and soul of someone looking at the painting, that’s when I know I’ve found a special spot.”

The Wrightsville Beach Museum of History is selling signed 20-by-16-inch giclee prints of David Starbuck’s Wrightsville Beach Orientation #12 for a limited time. Starbuck is donating the print run to raise money for the museum’s COVID-19 Relief Fund. Orders can be placed through December 6 via a link on the museum’s website or Facebook and Instagram pages.