Painting the Edges of Memory 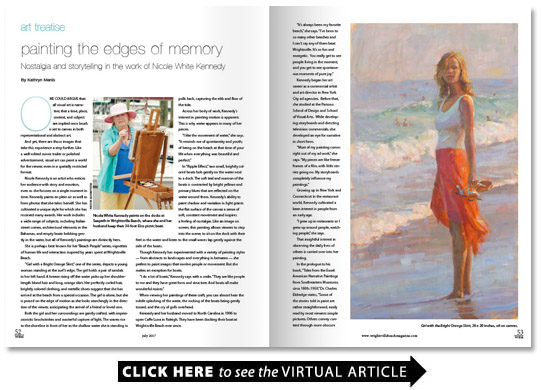 Nostalgia and storytelling in the work of Nicole White Kennedy

One could argue that all visual art is narrative; that a time place context and subject are implied once brush is set to canvas in both representational and abstract art.

And yet there are those images that take this experience a step further. Like a well-edited movie trailer or polished advertisement visual art can paint a world for the viewer even in a spatially restricted format.

Nicole Kennedy is an artist who entices her audience with story and emotion even as she focuses on a single moment in time. Kennedy paints en plein air as well as from photos that she takes herself. She has cultivated a unique style for which she has received many awards. Her work includes a wide range of subjects including Italian street scenes architectural elements in the Bahamas and empty boats bobbing gently in the water but all of Kennedy’s paintings are distinctly hers.

She is perhaps best known for her “Beach People” series vignettes of human life and interaction inspired by years spent at Wrightsville Beach.

“Girl with a Bright Orange Skirt ” one of the series depicts a young woman standing at the surf’s edge. The girl holds a pair of sandals in her left hand. A breeze rising off the water picks up her shoulder-length blond hair and long orange skirt. Her perfectly curled hair brightly colored clothing and metallic shoes suggest that she has arrived at the beach from a special occasion. The girl is alone but she is poised on the edge of motion as she looks searchingly in the direction of the viewer anticipating the arrival of a friend or loved one.

Both the girl and her surroundings are gently crafted with impressionistic brushstrokes and masterful capture of light. The waves rise to the shoreline in front of her as the shallow water she is standing in pulls back capturing the ebb and flow of the tide.

Across her body of work Kennedy’s interest in painting motion is apparent. This is why water appears in many of her pieces.

“I like the movement of water ” she says. “It reminds me of spontaneity and youth; of being on the beach at that time of your life when everything was beautiful and perfect.”

In “Ripple Effect ” two small brightly colored boats bob gently on the water next to a dock. The soft teal and maroon of the boats is contrasted by bright yellows and primary blues that are reflected on the water around them. Kennedy’s ability to paint shadow and variation in light grants the flat surface of the canvas a sense of soft constant movement and inspires a feeling of nostalgia. Like an image on screen this painting allows viewers to step into the scene; to sit on the dock with their feet in the water and listen to the small waves lap gently against the side of the boats.

Though Kennedy has experimented with a variety of painting styles — from abstracts to landscapes and everything in between — she prefers to paint images that involve people or movement. But she makes an exception for boats.

“I do a lot of boats ” Kennedy says with a smile. “They are like people to me and they have great form and structure. And boats all make wonderful noises.”

When viewing her paintings of these craft you can almost hear the subtle splashing of the water the rocking of the boats being gently tossed and the cry of gulls overhead.

Kennedy and her husband moved to North Carolina in 1996 to open Caffe Luna in Raleigh. They have been docking their boat at Wrightsville Beach ever since.

“It’s always been my favorite beach ” she says. “I’ve been to so many other beaches and I can’t say any of them beat Wrightsville. It’s so fun and energetic. You really get to see people living in the moment and you get to see spontaneous moments of pure joy.”

Kennedy began her art career as a commercial artist and art director in New York City ad agencies. Before that she studied at the Parsons School of Design and School of Visual Arts. While developing storyboards and directing television commercials she developed an eye for narrative in short form.

“Most of my painting comes right out of my ad work ” she says. “My pieces are like freeze frames of a film with little stories going on. My storyboards completely influence my paintings.”

Growing up in New York and Connecticut in the restaurant world Kennedy cultivated a keen interest in people from an early age.

“I grew up in restaurants so I grew up around people watching people ” she says.

That insightful interest in observing the daily lives of others is carried over into her painting.

In the prologue to his book “Tales from the Easel: American Narrative Paintings from Southeastern Museums circa 1800�1950 ” Dr. Charles Eldredge states “Some of the stories told in paint are rather straightforward easily read by most viewers: simple pictures. Others convey content through more obscure symbols using details freighted with personal often cryptic meaning — complex images that perhaps reflect the complex circumstances of their creation. But all suggest a basic and enduring fascination with a story well told with a tale well painted.”

Kennedy’s oeuvre appeals to this enduring interest in a well-crafted story.

Kennedy is also a photographer. She takes and keeps thousands of photographs from streets parks and beaches all over the world. These photographs become the basis for her paintings.

Though she does occasionally paint straight from a photograph the artist will more frequently combine aspects of multiple photographs to create a new image. She will frequently revisit images that are several years old and always adds original components to the painting.

Even though she is also the photographer the process of converting a photo into a painting is closer to interpretation than reproduction. Thus Kennedy’s work enables the viewer to revisit fond memories to put themselves back into those youthful carefree moments from their past. And it is in this way that she appeals to a universal sense of humanity narrative and emotion tapping into Eldredge’s notion of a collective human craving for a story well told.

“A lot of people see themselves or their children in these paintings ” Kennedy says. “As time passes details and memories can get blurry. People connect to the imagery in my paintings beyond ‘That’s a nice painting ‘ and it usually has something to do with ‘My little girl’ or ‘I remember when I did that.’ There is a very visceral emotional connection.”

This impression is evident in “Soaking it All In ” which shows two young women at a street-end beach access resting on the edge of a bench in front of a sea oat-covered dune at Wrightsville Beach. The two figures lean slightly on the left side of the canvas with the relaxed and serene body language of people who are comfortable with their surroundings. They are enjoying a cooling breeze on a hot summer day. One of the women looks away from the viewer down the beach strand. The other figure’s sun-glassed gaze points to the right side of the canvas looking out toward the ocean.

Elements of the scene prompt the viewer to fill in the gaps to imagine what they seeing. Their position to the far left draws the viewer’s eye deeper into the scene.

Kennedy has succeeded in developing an iconic and recognizable style without limiting herself to one type of image composition or setting. Though she finds specific and special joy in the painting of motion and of people and water in the process of motion all her works make a distinct appeal to a sense of youthful nostalgia and invite the viewer to step into a beloved moment in a memory.

Though they may not have seen the locations that her paintings depict patrons of Kennedy’s work travel across space and time when they interact with her pieces. Like the films and television advertisements that Kennedy got her start crafting these images appeal to something universal and emotional about memory that relates to its dual tendency to sparkle brighter and become blurrier as time passes.

She continues to develop and experiment with her skills from her studio in Raleigh where she and several renowned visiting painters help develop the minds and skills of North Carolina artists through workshops and classes.

But she still travels to Wrightsville Beach frequently always ready to find the next inspiration for her “Beach People” series.