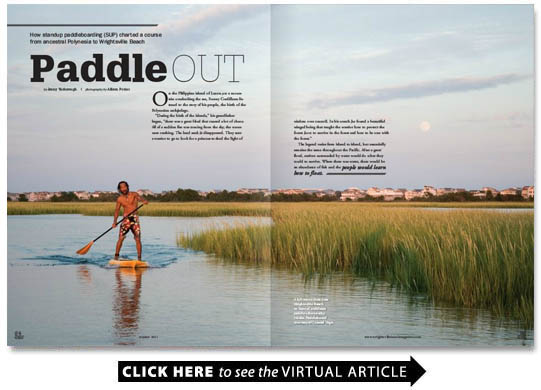 On the Philippine island of Luzon on a mountain overlooking the sea Sunny Cordilleras listened to the story of his people the birth of the Polynesian archipelago.

“During the birth of the islands ” his grandfather began “there was a great flood that caused a lot of chaos. All of a sudden fire was coming from the sky; the waves were crashing. The land sank; it disappeared. They sent a warrior to go to look for a princess to shed the light of wisdom over council. In his search he found a beautiful winged being that taught the warrior how to protect the forest how to survive in the forest and how to be one with the forest.”

The legend varies from island to island but essentially remains the same throughout the Pacific. After a great flood natives surrounded by water would do what they could to survive. Where there was water there would be an abundance of fish and the people would learn how to float.

Directed by the legendary warrior Cordilleras says the island men strung together long planks of bamboo.

“That is the original standup paddleboard ” Cordilleras explains.

With carved wooden paddles used in concert with spears watermen paddled and plundered.

“We the Philippines Guam Hawaii Saipan all the islands have been doing this thousands of years since the birth of the islands ” Cordilleras says.

But the root of SUP as we know it today extends long after Polynesians found Hawaii bringing with them their tools. It came long after the chain of volcanic islands were popularized by military families returning for vacations post-World War II and after the King of Rock and Rolls Hawaiian film debut on the beach of Waikiki.

With the call of the big waves to lure them travelers in search of surf were led into the iron blue swell by beach boys surf instructors that could trace their origins back to the legend. Like their ancestors they used heftier boards and wide paddles to venture offshore to take photographs of their students for souvenirs.

But standup paddleboarding did not become a sport until it was uncovered by American big wave surfer and co-developer of tow-in surfing Laird Hamilton credited for founding paddleboarding as a sport.

From Maui word spread to California and eventually to the East Coast where it is now the fastest growing watersport phenomenon.

Some call Jason Colclough co-owner of SideArm Surf and Skate a pioneer. Along with retired professional skateboarder and Eastern Skate Supply president Reggie Barnes Colclough is known as the first area standup paddleboarder. Colclough says he tried it in Maui one winter about five years ago.

“We didnt have standup paddleboards back then ” he says of the East Coast “So we had to use boards that were meant for tandem surfing.”

To gear up for standup paddleboarding Colclough ordered a 12-foot Mickey Munoz Superglide board and called paddle-crafter Jim Terrell to order a paddle.

Colclough says “It seemed like every time you came to the beach people would ask you What is that?”

Without proper gear Colclough applied wax to the board where his feet would need traction.

He explains “We didnt have traction pads and all that stuff.”

“Im not going to ride this barge”

“About three or four years ago ” Newkirk says “my wife bought me a paddleboard from Mike Barden at Surf City for Fathers Day.”

He says his initial reaction was typical for watermen used to prone boards.

He thought “Man Im not going to ride this barge.”

But Newkirk took the board to the ocean never bothering to start in the waterway.

“I started surfing in the second grade ” Newkirk explains. “I had surfed for 37 years and never been on one of these things but once I got on one and I got on the surf in the right conditions I realized how much more you can do with one of those than you can with a regular board.”

Places that previously hadnt been surfed became new territory for surfers like Newkirk Todd Bostian and Chris Curry who Newkirk says were the only others at Wrightsville paddleboarding when he started.

“The thing about surfing on a SUP is the paddle allows you to cover more ground ” Newkirk explains. “On a traditional prone surfboard if you see the wave its got to be within 50 or 60 yards for you to catch it.”

On a standup board at the offshore breaks Newkirk can spot a wave 200 yards out and catch it because of the power behind the paddle.

On a standup board hes no longer reliant on swell to have a successful day in the water.

“This morning ” Newkirk says “I got on my board walked out to the dock did a four-mile paddle around the beach. It took me 45 to 50 minutes. And in the 45 minutes I was outside I was seeing nature. I was breathing fresh air. I was out on the water and I got a great workout.”

Since he took on the sport Newkirk has dropped his gym membership.

“Its just opened up a new world to me ” he says.

John Beausang began paddleboarding after two herniated disks required core strengthening rehabilitation. A friend suggested SUP. Three years later Beausang connected the community of SUP athletes as the creator of Distressed Mullet a website currently ranked second or third in the nation for total traffic with almost 4 000 posts and about 300 000 hits a week.

“Its all about getting people out on boards ” Beausang says.

Wrightsville began to earn a name for itself when Jeoffrey and Catherine Nathan owners of Coastal Urge brought the beach its first SUP race in January 2009 the inaugural Coastal Classic.

“Our little area ” Beausang explains “has an amazing concentration of really good paddlers. Its like the perfect confluence of factors here. We have every different possible combination of water conditions. We have flatwater currents tides inlets open ocean and surf.”

After traveling the nation Beausang says it is safe to say Wrightsville is the perfect SUP spot. Within a five-mile radius of Wrightsville Beach one might experience all three primary features of the sport: flatwater downwinding (point-to-point paddling with a southerly wind) and surfing.

“Theres a place for pretty much everyone ” Beausang says “whether youre racing competitively on a national stage or whether youre just going out for fitness.”

With more than 170 paddlers including some of the best and most influential in the world (Southern Californias Jim Terrell; Joe Bark of Palos Verdes; Candice Appleby of San Clemente; Anthony Vela of Redondo Beach; Chase Kosterlitz of Tampa; Larry Cain of Canada; Karen Wrenn of Portland Oregon; and Heather Baus of Puerto Rico) the Carolina Cup became the largest event ever held outside of California and Hawaii in its first run.

“The course that we set ” Beausang explains “was unlike any other course in the country because it involves all of those different disciplines the ocean and the flatwater surf and the inlets currents boat traffic and tides.”

With Wrightsville Beach now viewed among professionals as a SUP destination Newkirk says the paddle club has big plans for Wrightsville.

“The dedication of this crew ” Newkirk explains “and the strength of this crew has put Wrightsville Beach on the map in my opinion as the epicenter of paddleboarding on the East Coast.”

Use the buddy system

Check out www.distressedmullet.com to find local meet-ups like the ones led by Richard Poole on Wednesday nights beginning at Dockside

Be conscious of tides

Visit www.supcleanup.com to find out about SUP Cleanups

What you need according to laws enforced by the U.S. Coast Guard N.C. Wildlife Resources Commission and Town of Wrightsville Beach

leash (for paddling in surf zone)

When Trish Arnold bought her kayak she made sure there would be room up front for Heidi her Pomeranian cocker spaniel mix.

“Heidi is the captain of my kayak ” Arnold says.

Though kayaking is Arnolds passion she says she came to the sport by way of what could have been a very tragic accident.

Two weeks after the Wrightsville Beach triathlon in which she competed as a cyclist Arnold says she was out on a training ride when a cyclist beside her hit a pothole. His front tire hit her back tire.

“I ended up in the hospital in surgery ” she says. “My whole left side was in a cast. I decided then after I recovered from it that I wasnt going to return to cycling like that. I needed to find another sport.”

In search of another form of exercise that would still keep her in touch with nature Arnold turned to the kayak.

Today she and Heidi go out around Banks Channel as often as they can preferably in the morning and with friends. She even purchased a spare kayak so that she can take friends with her who may not have a kayak of their own.

Living in Wilmington Arnold stores her kayaks at a friends home on Harbor Island along with native Kim Myer who has been friends with Arnold since the 80s.

Myer says shes always been into watersports. Her passion was once windsurfing but through the years she says kayaking was a natural progression.

Aside from the upper body and core workout for which Myer and Arnold strive to keep in shape Arnold says its the morning kayak rides that are a great start to the day.

“I enjoy seeing nature ” Myer says. “A lot of the women I know that kayak a lot enjoy just being amongst the dolphins.”

Though most of the pairs expeditions are confined to the Intracoastal Waterway Myer says she also likes to explore the marshes.

Whats the latest news on the old faithful mode of paddle transportation?

Native Americans made them out of birch bark. Later they were wooden strip built. As synthetic materials like plastics made their way into the crafting of canoes makers began using polyethylene a heavier plastic Royalex fiberglass carbon fiber and Kevlar.

“Really ” Chris Tryon co-owner of Hook Line and Paddle says “the change has just been materials to make them either stronger or lighter.”

The wider the midsection of the boat the more stable. The longer the boat from the bow to stern the faster. And the more rocker or curvature of the keel line the more agile.

Unless youll be taking your canoe into white waters or big rivers a standard 14 to 17-foot boat with less rocker will do for the local water bodies and most all occasions.

“The canoe ” Tryon says “is the all-around catch-all. Theyre pretty versatile. You can hunt out of them fish out of them camp out of them.”

He suggests venturing out into the northeast Cape Fear River and meandering the creeks along with the Black River where during this time of year the changing red and golden foliage is ever present.