Ever wished you could quietly sneak up behind a fish in six inches of water sink your line draw a bite and haul that baby out before it knew what happened? Wish granted. 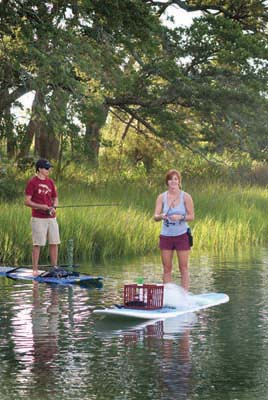 Standup paddleboard fishing and kayak fishing are changing the way people fish offering them the ability to sneak up on their prey the capacity to maneuver through shallows and the capability to put in at any point where ground meets water. Plus they both offer fantastic strength training and toning workouts.

Almost anyone from six to 70 can do it ” says John Denney one of the original standup paddleboarders who was in Hawaii when the sport started to take hold and now fishes in Florida. “Men women children I mean everybody. The demographic is bigger than any other water sport there is. It’s much bigger than surfing or kiting or wakeboarding and the comfort level — compared to canoeing for instance — is unbelievable. You get a much better view your legs are active your butt doesn’t fall asleep when you’re paddling and you get a great workout. It’s incredible for your stability it’s incredible for your balance and it’s incredible for your peace of mind.”

Denney’s energy reflects the excitement of people across the nation who are discovering the fun of fishing while standing on a paddleboard in water they could otherwise never fish in … or even see in the same way.

“It’s a lot of fun ” Nathan says. “It’s a different perspective because it’s quiet and you can see out into the marsh from the board a lot easier because you’re standing instead of sitting. And the sneak factor is huge; you can sneak right up on them.”

But the better your balance the better your sneaking. Paddleboarding requires a certain amount of balance to keep the board steady while reeling in a fish (yes count on reeling in fish). While most paddlers claim the board is extremely stable — and it is — it does take some practice before you can maneuver around like a pro.

Once you’ve struck that balance so to speak and your comfort level is high paddling is like riding a bike — and just as economical. With gas prices shooting angry smoke out of people’s ears standup paddleboard fishing has become a serious option for those looking to fish for less money.

What does it cost? Most paddleboards run from around $1 000 and up depending on the size board customizing and brand. Paddles can be purchased for under $100.

If you’re thinking “That can’t be all there is to it ” you’re right. You also need a milk crate and a fishing pole.

First attach the milk crate to the rear end of the board using a tie-down strap available for about $5 in most stores that sell standup paddleboards. The milk crate gives the paddler a place to hold a tackle bag and other fishing items.

“You don’t need to go buy anything except the board and the paddle to go standup paddleboard fishing ” says Nathan “because you already have everything. Everybody’s got some kind of milk crate hanging around. You can always just lash the crate around your board with a bungee cord or rope [if you don’t want to buy the tie-down].”

Nathan says the rules governing when and where to fish on a paddleboard are similar to those same rules for a boat. He recommends fishing for trout and flounder because a paddler can spot them feeding along the bottom.

If there’s a downside to standup paddleboard fishing it’s that you have to travel lean and mean.

“You’re going to go a little bit leaner ” says Chris Tryon a part-owner of Hook Line and Paddle (435 Eastwood Road 910-792-6945). “You’re not going to have the option of bringing tons of equipment with you because you don’t have a whole lot of places to store it. They’re super fun to fish off but you have to scale back. You have to look at it ergonomically.”

You’re going to need a life jacket. The United States Coast Guard recognizes the paddleboard as a vessel and requires anyone operating it to have a life jacket on board. Though we certainly don’t recommend it some standup paddleboarders leave their jacket lying on the nose of the board … if their dog isn’t already lying there that is. Some paddlers have been spotted with their dogs standing — or even lying — on a board.

During the first Standup Paddleboard CUP race (SUP CUP) which began at Bluewater — An American Grill during the month of March one man raced with the help of his young son who sat cross-legged on the front of the board with his own little paddle.

Racing and surfing on a paddleboard is a practice whose roots are anchored in Hawaii but the sport has expanded across the nation and paddlers are paddling everywhere says Denney.

Fishing from a standup paddleboard hasn’t caught on quite as quickly but paddlers are confident that the practice will gain momentum as more and more people begin paddling.

“It’s just so new to everybody ” says Nathan “but we’re selling a lot of them because people see the workout aspect about getting out there and standing up but not that many people are really asking about fishing or commenting about fishing. Yet.”

Which way is that fish going?” says Tryon standing on his kayak in the water surrounding Fort Fisher scanning the sandy bottom for red fish and casting his line into the shallows surrounding the tiny islands and marshes that dot the landscape. 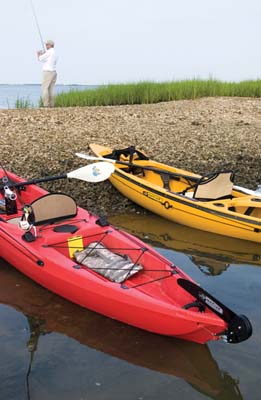 When most of us hear the word kayak we see a man holding a paddle with fins on both ends the upper half of his body growing out of a thin boat that looks like a giant kazoo.

But kayaks have come a long way and undergone many transformations. Companies make kayaks stable enough that people can stand in them. Some even have pontoons that open the rear of the kayak into a Y-shape creating stability and support.

Tryon says the pontoon kayak is so stable that he can stand on the edge of it hop up and down and it won’t tip over.

“The great part about this kayak is you won’t spill your drink ” he says laughing referring to a styrofoam cup filled with cola.

As with a standup paddleboard a kayak also gives fishermen the ability to sneak up on the back side of a fish in shallow water.

And like a standup paddleboard kayak fishing is an inexpensive way to catch fish.

“People here want to go out and enjoy the water because they live close to it ” Tryon says. “This is an inexpensive way to enjoy it without buying a power boat. You can still get to all the places you want to get to you just have to paddle there.”

If burning fuel is an issue then stay close to home. Your kayak is fuel-free. “Driving to the water is your only emission ” says Tryon.

not your standard kayak: Some kayak fishermen are opting not to paddle. Advances in kayak design now include propellers allowing people to move their kayak through the water by peddling or by flipping the switch to their electric motor — creating a hands-free if less environmentally sound experience.

You can customize your kayak with comfortable seats anchors rod holders dry bags anchor trolleys and safety gear. The scope of customization depends on your imagination.

So where do you start? There are two kinds of kayaks: a sit-in and sit-on-top.

A sit-in is a kayak where your legs disappear into the body of the boat. These babies are geared for recreational boating and exercise.

For fishing Tryon recommends a sit-on-top. This kind of kayak allows fishermen to carry all of their gear with them and it keeps water from filling up the inside because it has tiny holes that act as filters.

Out on the water around Fort Fisher Tryon carries multiple fishing rods two coolers a large tackle bag and other items all tucked neatly in the confines of his kayak. He doesn’t paddle sitting down but instead stands up using a long black pole to reach the soft bottom beneath the water to push the boat along.

“The sit-on-tops nowadays are really geared toward kayak fishing ” Tryon says. “The older sit-on-tops were geared to people who didn’t like being inside a boat. Then people started fishing off them and they became really popular and [kayak companies] just decided to design them to fish out of. I love kayaking and I love fishing. It’s a great marriage.”

In Wrightsville Beach we’re always looking for fun unique and cheap ways to enjoy our beautiful coastal environment. Standup paddleboard and kayak fishing are tailor-made for the Azalea Coast.