Over the Marshes & Through the Woods 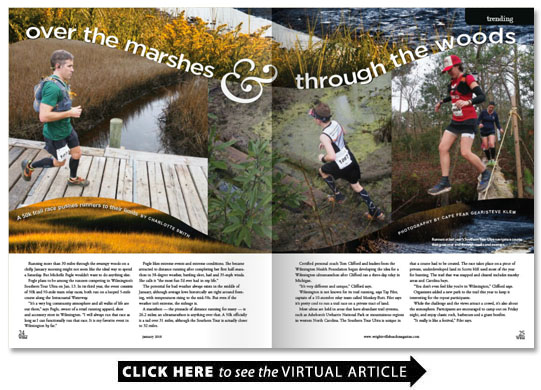 Running more than 30 miles through the swampy woods on a chilly January morning might not seem like the ideal way to spend a Saturday. But Michelle Fogle wouldn’t want to do anything else.

Fogle plans to be among the runners competing in Wilmington’s Southern Tour Ultra on Jan. 13. In its third year the event consists of 50k and 50-mile team relay races both run on a looped 5-mile course along the Intracoastal Waterway.

“It’s a very big community atmosphere and all walks of life are out there ” says Fogle owner of a retail running apparel shoe and accessory store in Wilmington. “I will always run that race as long as I can functionally run that race. It is my favorite event in Wilmington by far.”

Fogle likes extreme events and extreme conditions. She became attracted to distance running after completing her first half-marathon in 38-degree weather battling sleet hail and 35-mph winds. She calls it “the most fun I’d ever had in my life.”

The potential for bad weather always exists in the middle of January although average lows historically are right around freezing with temperatures rising to the mid-50s. But even if the weather isn’t extreme the mileage is.

A marathon — the pinnacle of distance running for many — is 26.2 miles; an ultramarathon is anything over that. A 50k officially is a tad over 31 miles although the Southern Tour is actually closer to 32 miles.

Certified personal coach Tom Clifford and leaders from the Wilmington Health Foundation began developing the idea for a Wilmington ultramarathon after Clifford ran a three-day relay in Michigan.

Wilmington is not known for its trail running says Tay Filer captain of a 10-member relay team called Monkey Butt. Filer says it’s pretty cool to run a trail race on a private tract of land.

Most ultras are held in areas that have abundant trail systems such as Asheboro’s Uwharrie National Park or mountainous regions in western North Carolina. The Southern Tour Ultra is unique in that a course had to be created. The race takes place on a piece of private underdeveloped land in Scotts Hill used most of the year for hunting. The trail that was mapped and cleared includes marshy areas and Carolina bays.

“You don’t even feel like you’re in Wilmington ” Clifford says.

Organizers added a new path to the trail this year to keep it interesting for the repeat participants.

While the challenge and the views attract a crowd it’s also about the atmosphere. Participants are encouraged to camp out on Friday night and enjoy classic rock barbecues and a giant bonfire.

The community aspect is what sets it apart from other local distance-running events.

“It’s a way to get people together and have fun ” says Jason Adams Southern Tour participant and Wrightsville Beach business owner. “It’s a cheap way to entertain yourself. You get some music you get to see your friends. You’re running which is good for you. It’s a win-win for everybody. I just like being a part of that community event that’s bringing people together.”

The atmosphere the trail and the distance adds up to a “we’re all in this together” feeling. Fogle is an accomplished road racer a Boston Marathon qualifier but she prefers the vibe of the ultra.

“That’s what’s great about this race ” says Fogle who finished third overall last year. “You go out to a road race and people are pretty competitive. Throw people on a trail and they become way more fun and relaxed and chill.”

An ultra is different from a typical road marathon and not just because of the increased distance. A marathon is more structured. Most runners have a goal time and markers every mile make it easy to keep track of pace. Not so on a trail. Uncertain conditions and distances tend to attract runners with a different mindset.

Adams runs 25 to 35 miles per week often in his surf shorts just for the fun of it and to stay active.

“For me [running is] freedom ” he says. “It’s a way to get out there and go and I’m not thinking about anything and I’m not distracted by watches and gear. It’s just your brain. I don’t listen to music my cell phone’s not going it’s just you and your thoughts. That’s what running does for me.”

That’s not to say that the Southern Tour Ultra is without competition especially in the 50-mile age-graded relay race. Up to 10 team members run a 5-mile leg each.

Filer is definitely in it to win it. Because of the gender and age handicap Filer says he stacks his team with fast women. The first year they won both the gross time and the handicapped time. The second year they won just the gross.

“That burned it stung ” Filer says. “How we lost last year the team that won came up with a couple of 65-year-old women.”

He has recruited some new runners and predicts team Monkey Butt should win both. “My team is 80 percent women; old fast women ” he laughs.

In the shorter race runners can push the pace whereas the longer distance requires careful energy conservation. Although running 32 miles for four to nine hours is painful as well.

Ultra runners are attracted to a certain type of “punishment ” Adams says. The trick to pushing through the pain is mental rather than physical.

“It’s a matter of making your mind push yourself through that physical pain ” he says. “I’ve been in pain for races and the minute you stop typically in seconds that pain goes away. So just knowing that you push on through. I can go another minute I can go another mile I can go another 2 miles to get to my goal my finish line. I just suck it up and get through it and it’s going to go away.”

Pushing through it is how he finished in the top five at the Southern Tour last year without logging the kind of serious mileage typical to most ultra runners.

Some ultra-goers participate just for the party and the tailgate atmosphere of the weekend. Clifford says the event is all about getting people out active and social.

“I feel like we need more of that ” he says. “We’re in the era where we get stuck in front of the computer in front of the cell phone in front of the TV worried about what’s going to happen tomorrow instead of focusing on today and being in the moment. It gets people out. I think that’s good for everyone to do that once in a while.”

Merely finishing the ultra is the goal. Most people who run it are out there to challenge themselves and they find it fulfilling when they cross the finish line after 32 miles. It’s like a badge of honor.

“Why do people who do endurance sports why do they choose that direction? It’s because it relates to your perseverance resilience in life ” Clifford says. “It teaches you that you can do something that you may never have thought you could. So when you accomplish an endurance event it definitely transfers to the confidence that you could have in life.”