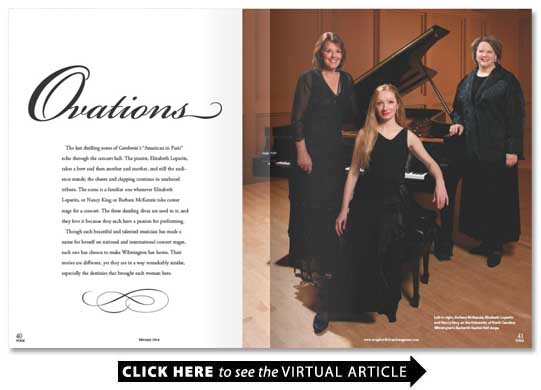 The last thrilling notes of Gershwins American in Paris echo through the concert hall. The pianist Elizabeth Loparits takes a bow and then another and another and still the audience stands; the cheers and clapping continue in unabated tribute. The scene is a familiar one whenever Elizabeth Loparits or Nancy King or Barbara McKenzie take center stage for a concert. The three dazzling divas are used to it and they love it because they each have a passion for performing.

Though each beautiful and talented musician has made a name for herself on national and international concert stages each one has chosen to make Wilmington her home. Their stories are different yet they are in a way remarkably similar especially the destinies that brought each woman here.

Canadian soprano Nancy King s eyes sparkle and her voice has a definitive lilt as she explains   Everything in my musical life has sort of presented itself as a door opening to a move in a specific direction.

A summer at Tanglewood the Boston Symphony s famed music camp was a turning point for her.  I took a singing course run by Phyllis Curtin retired soprano from the Metropolitan Opera who was also a teacher at Boston University. I spent the most remarkable time there surrounded by professional musicians who were as passionate about music as I was and I ended up studying for my master s at Boston University then several more years in opera studies at the Longy School of Music in Boston. I discovered that I was also really good at teaching and I knew I needed the next layer of education to do that so I got in my car and headed to the University of Minnesota to study for my doctorate. I loved Boston and I cried all the way to Minneapolis but I soon grew to love it there too.

One day an unexpected phone call came from her former voice teacher Joan Heller. At the time Heller held the position King now holds at the University of North Carolina Wilmington Associate Professor of Voice.

She was recommending me for her position since she was leaving. I didn t want to leave my doctoral studies but my voice teacher said  you definitely should. I applied for the job and UNCW hired me over the phone! I was only 30 years old and had my first full- time academic position. I ve been teaching and singing in the community ever since and loving it.

For Barbara McKenzie the realization that she wanted to return to her native North Carolina came during a performance in Yugoslavia when she suddenly thought  Why am I here?  She knew in that moment that it was time to go home.

I went to Germany after receiving my master s degree from the Peabody School of Music in Baltimore because it was a rare opportunity   she says.  What I found there was a reverence for music and artists and performers. In this country people had said:  What do you do? and when I told them I was a classical pianist they looked at me as if that were my hobby and they wanted to know what I really did.

After 10 years of performing in dozens and dozens of countries all over the world and also touring for the US State Department I knew I wanted to stay in North Carolina and contribute to the cultural life here   she says.  I felt there was a need to cultivate a dynamic sort of conversation about the value of classical music. I always think about how I can use music to give someone a deeper experience that is relative to his or her life.

Co-founding Chamber Music Wilmington in 1995 a nonprofit organization devoted to an enhanced appreciation and understanding of chamber music has enabled McKenzie to seek out some of the nation s finest chamber music musicians along with international stars and invite them to this region to perform. In doing so she has expanded her own opportunities for performing as well including a memorable Carnegie Hall concert in New York in 2011.

Now I want to spend more time in supporting the careers of young artists. I want to help them with their career development and encourage them to be creative and to perform help them find ways to make it happen she says.

The way to Wilmington for Elizabeth Loparits was a longer one. The classical pianist professor of music and department accompanist at UNCW grew up in a small village south of Budapest Hungary on the banks of the Danube River.

Nobody in my family is a musician  she says  so I didn t know anything about music until one day when I heard a young girl play Beethovens Fur Elise.  I thought it was the most beautiful thing I had ever heard.

It brought tears to her eyes she recalls. I went home and told my mother that I really wanted to learn to play the piano. I was nine at the time. She searched in the area but there was no one who could teach me.

Loparits  dream seemed impossible until an unexpected crisis caused the family to move to the village where her grandparents lived.  That town had a music school  she explains  a state music school not a private one run by the communist government. By that time I was twelve and if you were over ten years old that particular school would not take you as a piano or violin student; the demand was too high and the competition too great. But my grandfather went day after day to the music school and begged them to accept me. He had donated a lot of money to the school in the past and he felt it would have some influence. I actually pleaded with him not to go back. I was embarrassed for him but he refused to give up. Finally it was the school that gave up. By then I was almost 13. In three years I completed seven years of work.

There was no doubt that she would become a concert pianist and it was during her fourth year at the university that her big chance came.

A Hungarian musician and teacher who left Hungary during the 1956 revolution to teach at Illinois State University established a master s scholarship program at that university so that one Hungarian student each year could study there. Finally after 40 years when the Iron Curtain fell he was able to return to Hungary. Each year afterward he came to select a winner for the scholarship at ISU. The year I received my diploma from the Franz Liszt Academy in Pecs he held a master class there and I played a Chopin piece for him. He chose me. I cried and cried because it represented such a change in my life far away from home but I was so happy.

To accept the scholarship Loparits had to pass an extensive English exam. Though fluent in Russian and German with a smattering of French she had never studied English.

My parents were amazing. They paid for a private instructor to come every day   she says.  Each night I slept with headphones on listening to the BBC hoping that English would soak in. I had only three months before the test. I remember being on the bus in Budapest the day of the test. It was a gray day and I thought   There is no way I am going to pass this. Then suddenly I felt in my heart that I was walking into certainty I don t know how to explain it. And miraculously even though my score was a little bit low I made it. I passed.

She completed her master s at Illinois State University and went on to receive her Doctor of Musical Arts in Piano Performance from the University of North Carolina Greensboro.

With a soft charming accent and impeccable English she continues the story of how she came to Wilmington.

I had a friend a jazz musician who was playing at Airlie Gardens some years ago. I came along and while here I visited UNCW. I d always loved the ocean and as I was walking that day on campus I looked down and saw a little bit of beach sand and I thought   Wow if I could ever live here it would be magic!  Then several years later this position opened up and so I came with only my keyboard and my cat.

Loparits loves her work at the university and she is especially proud of the accomplishments of the private students she teaches through UNCW s Community Music Academy. Recently one of her students was the youngest contestant in his category to win the coveted Deas Student Concerto Competition now in its 37th year and named for the late Richard Deas former chairman of the UNCW Music Department. The winner of the competition performs in concert at Kenan Auditorium with the Wilmington Youth Symphony Orchestra.

For Nancy King founder of UNC-WOOP! (UNCW S Opera Outreach Project) a prime example of that program s success is summed up in the comment of a second grader at Coddington Elementary School. Listening to their chatter as the children were leaving a performance her collegiate singers had presented from the opera  Hansel and Gretel   King overheard a little boy exclaim with unabashed delight   That
was the greatest show ever; I didn t even care if it was opera!

King says   To think that these little second and third graders could sit for almost an hour and listen to the finest classical music. These are not operas that are written to dumb down the level. This is high art that these kids were listening to and they really responded to it. I love these moments too for my college students when they make the brilliant connections between what they ve learned in the
classroom and the life experiences they ve had and it all folds together into a performance where they reach this new level of being able to communicate. It was kind of a magic moment for them when they performed for those little kids they all felt like rock stars.

McKenzie shares many of the same feelings and ideas that King and Loparits have about the value of her art. She sums it up this way:  For 40 years I ve been a performer. I ve had a lot of experience as an educator and as an entrepreneur in the arts. Music is definitely a spiritual thing and there are so many pathways to follow. It is in imagination without boundaries ? where we are able to freely think explore and discover.

Each one of these vibrant musicians has made her impact on the community. Exuding energy and enthusiasm they claim that it is the effect their work has on those whose lives they touch that makes it all worthwhile. Imagination inspiration and dedication: three driving forces for three dynamic performers.