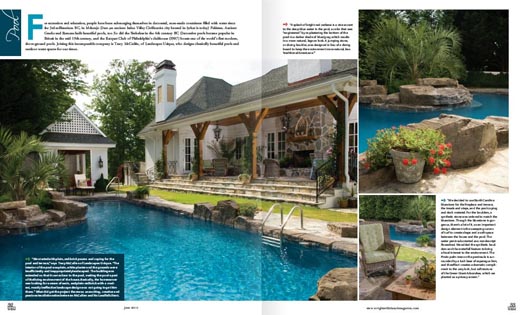 Fountains and ponds and pools have been essential architectural design elements in outdoor spaces for nearly as long as there have been outdoor spaces. Todays designers match historical concepts with modern technology and cutting-edge design to incorporate water in ways that soothe inspire interest impress engage excite and invite us to live outdoors as often as we can. To take a closer look we asked three outstanding local landscape designers to each share one of their favorite water features a fountain a Koi pond and a pool as well as the creative thoughts behind its design and construction. What we learned is that water is an artistic statement the heart of the action and the soul of where we want to be outdoors.

Koi (Cyprinus carpio) a colorful variety of the common carp have long been considered by admirers around the world to be the most popular fresh-water ornamental pond fish. The first written description of Nishikigoi Japanese for “brocaded” carp appeared in a Chinese book produced during the Western Chin Dynasty 265-316 A.D. and Koi breeding in Japan was recorded as early as the 17th century in the rice-growing region of Niigata. Given that Koi are often referred to as “living jewels” or “swimming flowers ” its no surprise that landscape designers today are creating beautiful ponds for them in backyards and courtyards around the globe. Here on the Cape Fear Coast stone mason Doug McGraw is keeping this ancient tradition alive in fine and striking fashion.

For recreation and relaxation people have been submerging themselves in decorated man-made containers filled with water since the 3rd millennium BC in Mohenjo Daro an ancient Indus Valley Civilization city located in (what is today) Pakistan. Ancient Greeks and Romans built beautiful pools too. So did the Sinhalese in the 4th century BC. Decorative pools became popular in Britain in the mid 19th century and the Racquet Club of Philadelphias clubhouse (1907) boasts one of the worlds first modern above-ground pools. Joining this incomparable company is Tracy McCullen of Landscapes Unique who designs classically beautiful pools and outdoor water spaces for our times.

Long long ago when water was challenging to transport fountains (from the Latin fons or fontis meaning a source or spring) were all about function over form and were used for drinking and bathing. In ancient Rome they became decorative elements in gardens and courtyards and throughout the centuries in Moorish Spain Italy and France the art of fountains was prevalent across Europe. Today fountains can still be practical for drinking or recreation but landscape architect David Donohue of Native Landscapes demonstrates in no uncertain terms that the art of fountains is alive and well.