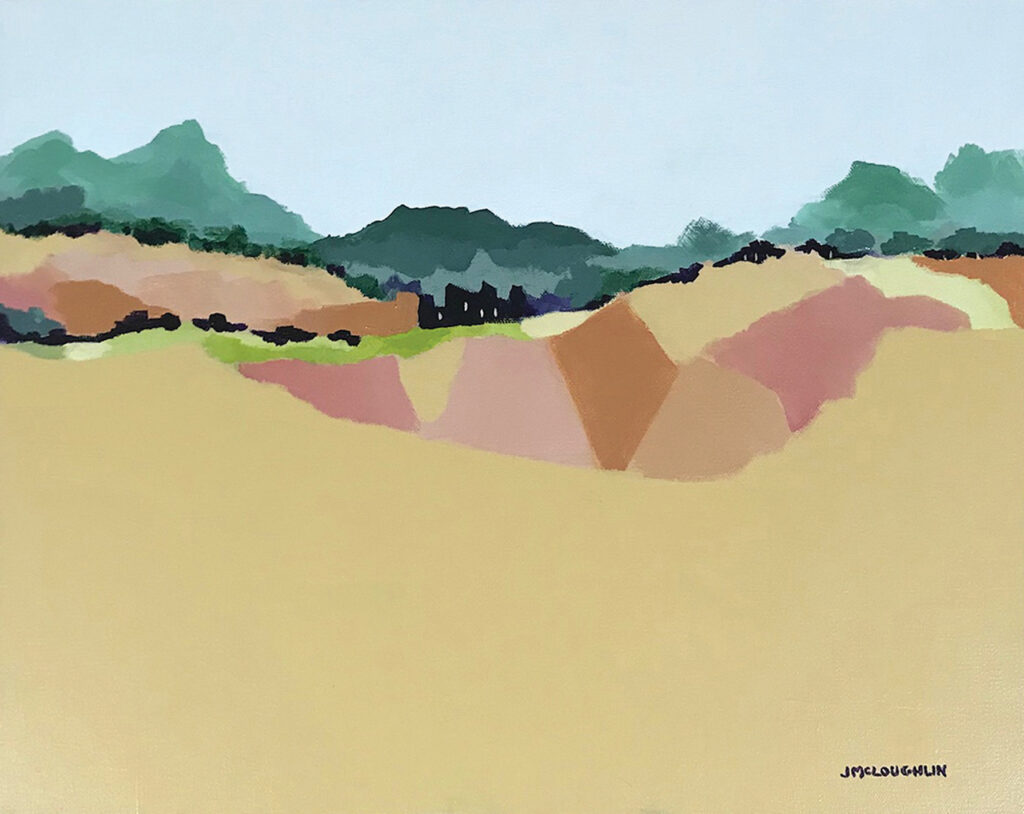 While working on her BFA in studio art, Joan McLoughlin received a landscape assignment. As an avid gardener, it would have been easy to paint scenes of fauna and flora. She decided on another approach, one that would later reveal her interpretation of art and creation.

“I did a person holding hand grenades. He had a big triangular piece of green paper coming out of his body where his head should be. I was thinking about what we do to the earth, and I handed it in as a landscape,” McLoughlin says. “I took a chance and got an A. It got selected into a national drawing and print competition. That encouraged me to do my own thing. Once you know the rules, you can break them. That’s what I decided to do.”

Today, her body of work is dominated by abstract art, a style she originally used to let loose within an educational discipline of realism. Her paintings inspire imagination yet imitate reality in her floral or woodland pieces.

At her home studio, a painting is propped on the wall. Thick brush strokes layer violet, teal and gray into the appearance of a hat-draped silhouette holding a bouquet. It is a visual the viewer might have to confirm with McLoughlin herself.

“Yes, it is a woman holding flowers,” she laughs. “It’s actually called, Have You Seen Her?”

Yellow Bird has a similar approach, once the eyes focus on the subject. Much like waking up in the middle of the night, bleary eyed as objects slowly take shape, McLoughlin’s work comes into focus the more you look at it. This is evidenced in her Faceless series, which began as a Christmas card.

“My husband said to me, ‘Why don’t you do a church with a bunch of people walking up to the church?’ and I said, ‘Because I don’t do realistic.’ What I did was my version of the church, and these were the people,” she says. “Some people say they look like candles and that’s fine. I love when people see different things in my art.”

While today her paintings celebrate nature and color, her creativity originated from photography. She received a camera as a child, and working with film became a passion, including experimenting with development techniques later in life. After her children left for college, she decided it was time to finally pursue her creative dreams. She enrolled at Notre Dame of Maryland University, double majoring in photography and studio art.

“As cameras went more digital, I felt I had to focus more if I wanted to be a painter,” she says. “I had to paint more and not split the time. That’s why I gave up the photography; I never really went back for a while.”

That is until she received a Christmas card with a black and white photograph of her and her two sisters captioned, “Sisters, dolls, life was so simple.” This inspired a mixed media series utilizing family photographs and abstract art. She included the photo her sister sent in So Simple Then.

“The photo transfer exhibit at Art in Bloom was so meaningful to me,” she says. “It’s my ancestors, it’s my story. I loved seeing the people come in and remember their own stories and share their own stories, too.”

Today, her art is mainly acrylic on canvas. In her studio, two separate works-in-creation sit on easels with finished canvases against the wall. Post-it notes line her desk. She points to one, then reads out loud.

“Monet said, ‘I perhaps owe having become a painter to flowers.’” McLoughlin pauses. “I love flowers and nature. There’s so many flower paintings but these aren’t any particular flower. They grow in my head, they grow on the canvas.”

Most of her work starts without a plan. In her floral abstracts, the flower blossoms after paint, revealing itself amid lush brushstrokes. Angel Eyes and Ups and Downs display a self-taught technique.

“I’ll take a brush with just water and go down the canvas,” she says. “Then I take the [paint] loaded brush and put it up there; it trickles down the wet line. You see a lot of paintings with drips. Maybe because I’m a neat freak, I let them be loose then go over them and sharpen them up.”

For a self-declared perfectionist, there’s a comfortable chaos in both her florals and semi-abstracts. Papier-mâché adds a cosmos-like texture to The Ties That Bind. Loud and Clear and Side by Side showcase non-descript florals against tangible objects like a flower vase or windowpane. Her process starts with disorder then she reins it in with small brushstrokes and detail.

Exhibiting her love of nature, McLoughlin’s semi-abstracts possess an idea of the woods or changing seasons. In Gatekeepers, deep tree roots, reflections of water, and a black forest represent a land time forgot. The diptych Far and Wide shows rolling hills, sunset shades, and tree lines separating the two. When Eclipse Gallery asked her for a piece similar to Golden Rain Tree, she agreed to create something like it, but her process doesn’t involve making exact duplications.

“My process is very freeing,” she says. “It does its own thing. It’s hard to explain. I’m a very meticulous person and this is my license to do whatever I want, however I want.”

Much like how her subjects take shape after the paint, McLoughlin’s style is evolving.