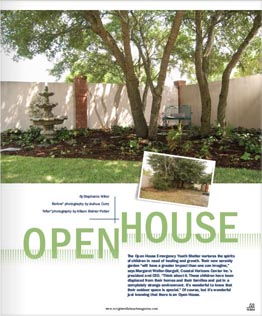 The Open House Emergency Youth Shelter nurtures the spirits of children in need of healing and growth. Their new serenity garden “will have a greater impact than one can imagine ” says Margaret Weller-Stargell Coastal Horizons Center Inc.s president and CEO. “Think about it. These children have been displaced from their homes and their families and put in a completely strange environment. Its wonderful to know that their outdoor space is special.” Of course but its wonderful just knowing that there is an Open House.

Eight people sit around a dinner table four adults and four teens at Open House Emergency Youth Shelter a respite for youth ages 6-18 from families experiencing mental health or substance abuse issues or from families where violence and incarceration repeats itself in an endless cycle. The dinner conversation concerns gutting fish the environmentalist who spoke at school that day and a ring one of the girls gave her boyfriend. They dont talk about what it feels like to be homeless their run-in with the law or the drug abuse that has thrown their lives into turmoil.

“More therapy happens around the dinner table than anywhere else ” says Kent Brondel a residential counselor at Open House. “They didnt get to enjoy this at home.”

It feels like home everyone doing their chores or homework or shooting hoops or playing video games. But the adults nearby are not their parents. The teens dont sleep in their own beds. Instead they go to one of three brightly colored rooms three beds in each with doors wired to alarms so anyone leaving the room at night will alert the staff. An invisible web of safety measures guides their moves permission granted to go outside no cell phones rooms free of objects that could harm such as razors pens and CDs.

The overriding goal is to keep these teens safe a trust denied many of them at home. The Open House staff works hard at this while balancing their charges need for freedom. “Rules” are absent from the admissions packet. Instead rights and responsibilities take their place.

“The least restrictive environment is really good for these youths. It gives them less reason to fight ” says Celine Adair hotline/shelter youth services clinical supervisor. “The more rules the more theyre going to hate it here. Theyre going to want to run. Then theyll be back in that power-struggle environment where theyre never going to win.”

Open House is not a lock-down facility. The doors are not locked from the outside. The young people who come here have to want to partner with the staff. “They need to see the merit in coming here for respite ” says Amy Feath director of the Crisis Intervention Services at Coastal Horizons Center Inc. which in addition to Open House Shelter and Services includes Hotline Services (Crisis Line/First Call for Help) and the Rape Crisis Center. “These are interesting young people who were given a really raw deal.”

The teens feel respected challenged in positive ways in this new environment. One young man almost 18 needed a state ID and kept coming to the staff for help. “I showed him where the DMV was ” says Brondel. “He went on his own and walked back here. Hed gotten the state ID by himself. He was so proud. He was grinning from ear to ear.”

A young woman recently left a note for the staff after her stay that read: “I will never forget what ya did for me I am going to be sad when I have to leave. I will miss you.” The staff keeps the letter nearby to remind them that the grueling hours several work 24-hour shifts are well worth it.

“This (Open House) has been a godsend during our time of crisis ” says one mother who adopted a teen-aged son. The young man run through the foster-home and group-home mill arrived with a host of emotional problems. The latest bout landed him in jail where he would have remained indefinitely while his parents researched long-term options.

“That would have been horrible ” says this mother who leapt at the chance to have her son out of jail and into Open House. That respite gave her the breathing space she needed to find a good long-term therapeutic environment.

There is nothing else available in the area for teenagers says this mom. “Its been a nightmare. Im so glad theyre there. Nothing outside of being with your family is ideal but they hold the kids accountable. Theyre so willing to work with me.”

The staff believes in the possibility of change and growth for their residents. “Whatever got them to our doorstep ” says Feath “they now have a clean slate. They start with an A and they can keep it. We give them clear guidelines on where to go from here.” (Emergency foster care is generally 15-21 days.)

People funnel into Open House from a variety of places a variety of socio-economic backgrounds. Many come through the Department of Social Services (DSS). DSS places the teens at Open House while it investigates potential abuse or neglect in the home. The shelter goes to work with the teens as soon as they arrive offering a safe haven administering crisis intervention. They help with either the transition back home or to an alternate location.

DSS is not the only road to Open House. When police get involved with a teen families know theyre in trouble. Some parents call Open House with an SOS. Often the child is not a willing participant but with a visit to the facility crisis intervention begins.

“We can work it so he doesnt have to stay here but if he does well provide a bed for however many days he needs it ” says Brondel. “We will do whatever we can to alleviate that crisis so the child can go back home with you so you have the services in place.” Celine Adair a licensed therapist is on site to do family therapy and to identify resources for the parents.

Another population using the services is single-parent homeless families. Shelters require an adult of the same sex to stay with a child so a single mom may stay at the shelter while her sons and daughters are safe at Open House. Children survive family stress better if they have each other and they dont have to deal with the additional crisis of being split from a sibling.

The kids are angry and have a right to be angry say the staff but they learn that when they act out it impacts everyone around them. “They cant trade lives. Theirs is just as upsetting to them as yours is to you ” says Feath to the teens. Crisis is crisis whatever form it takes.

“Open House accepts everybody and everybody is allowed to be themselves. It doesnt matter how poor you are how rich you are your religious orientation none of it matters. You are in crisis and you need help ” says Brondel.

And when it gets to be too much for these young people to handle by themselves there are trained staff members to talk to a home-cooked meal on the table and a beautiful outdoor space to offer some hope of peace.

After school the girls at Open House usually make a beeline for the table and chairs in the patio area in the newly renovated backyard. Generally they beat the boys to the good seats. Settled in they begin their homework catch up on the day with staff and chat with each other.

“We had dinner out here every day last week. It was so beautiful ” says residential counselor Kent Brondel who is clearly proud of the remodeled garden the colorful annuals and thriving grass. Its a far cry from the sand and dead grass that had been the status quo for years.

One of the young men at the shelter was hands-on during the installation and was so excited by the work that he asked Tracy McCullen owner of Landscapes Unique and the man behind the design if he could work for him. McCullen was delighted to put the young man to work.

McCullen has always had an attraction to helping kids and adults who are underserved. He is currently at work on a local project Green Industry Philanthropist which will among other missions ask members to donate time and resources to improve landscaping at area non-profit organizations. When contacted last year about Open House McCullen did not hesitate to take on this backyard project coordinating and supervising all of the donated time and materials.

The yard McCullen says he inherited at Open House was a “neglected overgrown space that had no rhyme or reason. With what these kids have been going through they needed an environment that invites them to play that nurtures their spirit.”

“This serenity garden will have a greater impact on the children who stay at Open House than one can imagine ” says Margaret Weller-Stargell Coastal Horizons Center Inc.s president and CEO. “Think about it. They have been displaced from their homes and their families and put in a completely strange environment. It is wonderful to know their outdoor space is special.”

After dinner a tall young man filled with restless energy searched around for an outlet for his discomfort. The Open House staff gently guided him into the garden handed him a basketball and encouraged him to shoot hoops until the activity the outdoors and the surrounding beauty of McCullens garden could work their way into him and calm his spirit.