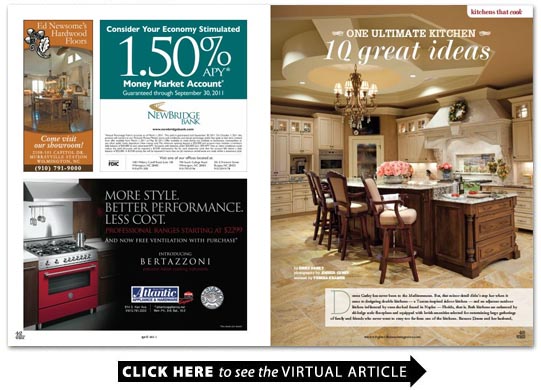 Donna Gurley has never been to the Mediterranean. But that minor detail didnt stop her when it came to designing double kitchens a Tuscan-inspired indoor kitchen and an adjacent outdoor kitchen influenced by ones she had found in Naples Florida that is. Both kitchens are enhanced by ski-lodge scale floorplans and equipped with lavish amenities selected for entertaining large gatherings of family and friends who never want to stray too far from one of the kitchens. Because Donna and her husband Marshall host weekend getaways in their four-bedroom home in Landfall. Sooner or later everyone ends up in the most popular rooms of the house.

Gorgeous beveled-glass French doors open to reveal the spectacular indoor kitchen where in Donnas opinion bigger is always better. Its easy to see this vision played out under 10-foot-high coffered ceilings and dropped crown moldings around an expansive center island. Exquisite chandeliers and tall glass vases contribute to the kitchens overall height while earthy natural colors help to ground the grandeur of the room.

Architect David McCall and kitchen designer Alice Evans of Dynamic Kitchens and Interiors worked with the Gurleys to make sure every inch of the space was maximized.

“One of the things that helped during designing was that I knew all of the different functions that were going to take place in the kitchen ” Evans says. “We designed specific spaces for the coffee station bar and prep sections and each has a designated area. We wanted to make sure nothing collided.”

Donna who found Evans through builder Mack Braxton of RMB Building and Design explained that she wanted a designer who was creative and added that Braxton helped make their designs a reality. “We had such a good time building this house we had a great time ” Donna says.

The kitchen works from the inside out with utilitarian items close by for everyday needssuch as the potholders and spices next to the range. Further down the counter and on the outskirts of the kitchen are drawers filled with baking utensils and closer to the hub of entertaining is storage for a host of coasters and napkins.

“Everything is set up where everything I need everyday stuff is right here ” Donna explains. “Then seasonal items for baking electrical appliances and so on are further out. The kitchen is so bigweve had eight people cooking in here at the same time and we never got in each others way.”

In December alone between house tours and holiday parties more than 700 people paraded through the Gurleys home. The kitchen is built to handle the high traffic flow.

“We only met with the architect three times; it really didnt take long. David listens to women. I really like that.” Donna laughs. “He is a wonderful fellow to work with.”